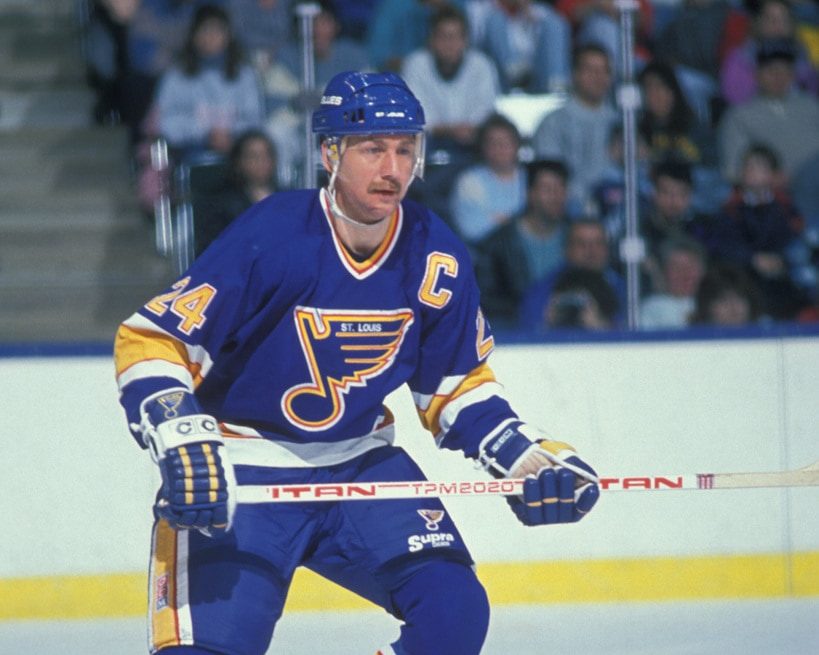 Since the 1968 NHL expansion that birthed the St. Louis Blues, the franchise has drafted 39 players in the first round of the NHL Entry Draft. Several of them have gone on to have impactful careers on and off the ice and became icons in the hockey community. Here’s a look at the club’s first-round draft choices throughout the years to form the best starting lineup possible. The exercise and selection process included the best player at their respective position, regardless of their time with the franchise.

Selected by the Blues ninth overall in the 1988 NHL Entry Draft, Rod Brind’Amour suited up for the Blues for two seasons. During that time, he appeared in 157 regular season games, scoring 110 points (43 goals, 67 assists) and 30 playoff games where he scored nine goals and 22 points.

After he finished the 1988–89 Central Collegiate Hockey Association (CCHA) season with the Michigan State Spartans, Brind’Amour joined the Blues during the 1989 Stanley Cup Playoffs, making his debut in Game 5 of the semifinals against the Minnesota North Stars, scoring a goal on his first shot.

Following the 1990-91 season, the Blues signed restricted free agent Brendan Shanahan from the New Jersey Devils and were forced to send prized defenseman Scott Stevens to the Devils as compensation. The arbitration ruling and decision created a massive hole on the team’s blue line, one management solved by moving the 20-year-old Brind’Amour and 25-year-old forward Dan Quinn to the Philadelphia Flyers in exchange for Murray Baron and Ron Sutter before the start of the 1991–92 season.

After 21 seasons with St. Louis, Philadelphia, and the Carolina Hurricanes, Brind’Amour retired with 452 goals and 1,184 points. In his career, he won two Selke Trophies, a World Championship gold medal, and a Stanley Cup with the Hurricanes. He is a 12-time 20-goal scorer and hit the 50-point mark 14-times.

After 21 seasons with St. Louis, Philadelphia, and the Carolina Hurricanes, Brind’Amour retired with 452 goals and 1,184 points. In his career, he won two Selke Trophies, a World Championship gold medal, and a Stanley Cup with the Hurricanes. He is a 12-time 20-goal scorer and hit the 50-point mark 14-times.

Blues icon, Bernie Federko, is the club’s best center selected in the first round, and it is not even close. Drafted seventh overall in the 1976 NHL Amateur Draft, he was a model of consistency and excellence in his 14-year NHL career. After being drafted, he started the 1976-77 season with the Kansas City Blues of the Central Hockey League. When he was called up to St. Louis, the Saskatchewan native was leading the league in points with 69 points (30 goals, 39 assists) in 42 games. He made his NHL debut on Dec. 22, 1976, against the Colorado Rockies but was pointless in his first three professional games before he scored his first goal against the Boston Bruins on Feb. 3, 1977.

Federko played 13 seasons in St. Louis, scoring 352 goals and 1,073 points in 973 games. After his only season as the team’s captain, he was traded to the Detroit Red Wings with Tony McKegney for Adam Oates and Paul MacLean. Federko retired after the 1989–90 season, having played exactly 1,000 NHL games – his final game was on April 1, 1990.

Of the trade, Blues general manager Ronald Caron stated: “First of all, Bernie’s on-ice contributions to the St. Louis Blues over the past 13 seasons are impressive, extensive and well-documented. Secondly, as a person, his needs and career future were important in this decision. The Blues’ future is with our youth. Bernie Federko led this team in every offensive category and was a cornerstone for this franchise from 1976 through 1989. Now it is our hope that he can extend his hockey life with a team — Detroit — that seemingly is focusing on stable veterans.”

Federko is the franchise leader in assists (721) and points (1,073). He is also the first player in NHL history to record 50 assists in 10 consecutive seasons. He is a seven-time 30-goal scorer and eclipsed the 100-point mark four times in his career.

The Blues selected the 5-foot-11 T.J. Oshie 24th overall in the 2005 Draft. On May 13, 2008, Oshie opted to forgo his senior season at North Dakota and signed with the Blues. He scored his first career NHL goal on Oct. 22, 2008, against the Red Wings. Almost instantly, he became a fan favorite because of his fast and energetic style of play. He scored 14 goals and 39 points in 57 regular season games during his rookie season.

Oshie became the face of Team USA when he took the 2014 Winter Olympic Games by storm. He was one of several American-born players considered for the US roster and was eventually chosen because of his high success rate in shootouts. During the Feb. 15 preliminary-round matchup against Russia, Oshie was repeatedly selected by head coach Dan Bylsma to participate in a shootout, which resulted in a 3–2 victory. According to international rules, coaches can use the same player in the shootout as often as they want, and Oshie was selected five consecutive times, scoring on four of six shot attempts, including the shootout winner in the eighth round.

In seven seasons in St. Louis, Oshie scored 110 goals and 310 points over 443 regular season games. On July 2, 2015, the Blues traded him to the Washington Capitals for Troy Brouwer, Pheonix Copley, and a 2016 third-round draft pick. Oshie went on to win the Stanley Cup with the Capitals in 2018.

While Barret Jackman never contributed much offensively, he remained a reliable, defensive-minded defenseman. His ability to block shots, distribute hard hits and break up plays made him a blue-collar player that fans enjoyed game after game.

As captain of the Regina Pats of the Western Hockey League, Jackman was selected 17th overall by the Blues in 1999 and played his first full season of professional hockey during the 2001-02 season as a 21-year-old. That season, he appeared in all 82 games, scoring three goals and 19 points with a plus-23 rating while averaging 20 minutes of ice time per game. His performance in his rookie season was good enough to win the Calder Memorial Cup, beating out the Red Wings’ Henrik Zetterberg and Columbus Blue Jackets forward Rick Nash.

On June 11, 2015, Jackman was informed by the Blues that after 16 seasons with the club, they were releasing him to free agency. This decision put an end to the second-longest tenure in Blues history, behind Federko. On July 1, 2015, Jackman signed with the Central Division rival Nashville Predators on a two-year contract worth an average of $2 million per season.

On June 20, 2008, the Blues selected defenseman Alex Pietrangelo with the fourth-overall selection. It was a franchise-altering decision as Pietrangelo became a cornerstone piece of the organization for a decade. After appearing in only eight games in the 2008-09 season and nine games in the 2009-10 season, he finally broke into the NHL in 2010-11. His first full season saw him suit up for 79 games and lead all Blues defensemen in scoring with 11 goals and 43 points, with a plus-18 rating and third on the team averaging 22 minutes of ice time.

After the departure of forward David Backes, Pietrangelo was named the franchise’s 21st captain, becoming the first captain in Blues history to hoist the Stanley Cup after they defeated the Boston Bruins on June 12, 2019. Six months later, he recorded his 326th assist, surpassing Al MacInnis’ record for the most assists by a Blues defenseman.

In the final year of his contract, Pietrangelo and the team were unable to come to terms on an extension. The two parties ultimately broke off negotiations, making him a free agent for the first time in his career. On Oct.12, 2020, he signed a seven-year, $61.6 million contract with the Vegas Golden Knights.

The Blues have only drafted three goaltenders in the first round, none of which had a better career than John Davidson. The Ottawa, Ontario native was drafted fifth overall in the 1973 NHL Amateur Draft.

Davidson’s time in St. Louis lasted only two seasons. After stepping into the NHL as a 20-year-old, he became a tandem with 29-year-old goaltender Wayne Stephenson. Despite being a rookie, Davidson managed a 13-19-7 record with a 3.08 goals-against average (GAA) and a .902 save percentage (SV%). Before the start of the 1974-75 season, the Blues traded Stephenson to the Flyers, making Davidson the starting goaltender. He played 40 games, but his GAA rose from an impressive 3.08 to 3.66 in his second season. That summer, management packaged him with forward Bill Collins in a deal with the New York Rangers for forwards Jerry Butler, Ted Irvine, and Bert Wilson.

Davidson went on to play eight additional seasons in New York and retired after the 1982-83 season, with a 123-124-39 record, a 3.53 GAA, and .887 SV%. He then turned to the broadcast booth from 1983 until 2006 before making another pivot to the front office, where he was named team president. As an executive, he has spent time with St. Louis, Columbus, and the New York Rangers.

The 39 players chosen by the Blues in the first round of the draft have seen mixed results in their professional careers. Management has done well over the last 20 years, drafting several players who became impactful players in the league.

Mike is a writer for The Hockey Writers and covers the St. Louis Blues since November of 2021. He has a keen love for statistical analysis, prospects, signings, and trades. Follow Mike on Twitter for further Blues or Central division hockey discussions, interview requests, or to provide content info.