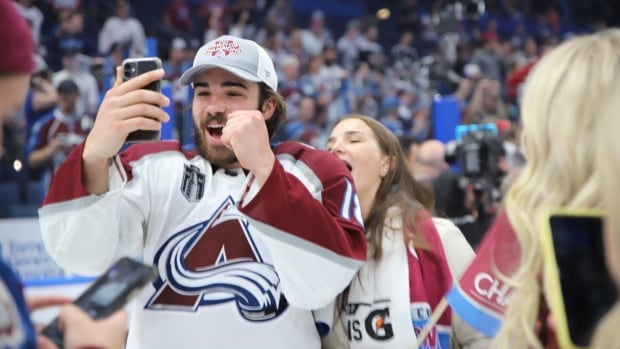 At just 21 years old, Alex Newhook of St. John’s says he’s gotten the chance to live out a childhood dream by hoisting the Stanley Cup over his head.

Newhook and the Colorado Avalanche defeated the Tampa Bay Lightning 2-1 on Sunday night to claim the Stanley Cup in six games, the team’s first championship since the 2000-2001 season.

“It was everything I dreamed of and more,” Newhook said Monday.

“Going into Game 6 with another chance to win the Cup is something you dream of as a kid.… I couldn’t say enough about our group last night [Sunday]. It’s a great feeling.… I’m very thankful and grateful to be on such a great team, and be a part of a winning club.”

Newhook is the third Newfoundland hockey player to win the Stanley Cup, following Danny Cleary in 2008 and Michael Ryder in 2011. He says it’s a special feeling to be able to join that list.

“The only word I can think of that comes to my head is crazy. It’s something I’ve dreamed of,” he said.

“Seeing fellow Newfoundlanders raise it before me in Cleary and Ryder, it’s something I’ve looked up to, dreamed of for so long. And finally getting that moment there to lift it above my head, it was an unbelievable feeling and something I’ll never forget.”

Newhook’s parents, Shawn and Paula, were back home in St. John’s for Game 6 hosting family and friends while his sister and friends were in Tampa Bay. They were scheduled to travel to Colorado if the series went to a seventh game, but they’re happy that didn’t have to happen.

“You’re kind of on the edge of your seat all night.… Both teams were so good, and it was so close,” Paula said.

“It was such a nail-biter last night [Sunday]. It came right down to the wire,” Shawn added. “When we stood up and we were counting down the last 10 seconds, that’s when I realized, ‘OK, this is happening.'”

The Newhooks say they’re excited for their son to come home with the Stanley Cup later this year, and are eager to share the experience with family, friends and neighbours who helped him reach the top of the hockey world.

“The amount of support that we’ve received from the people of Newfoundland and Labrador is overwhelming,” Paula said.