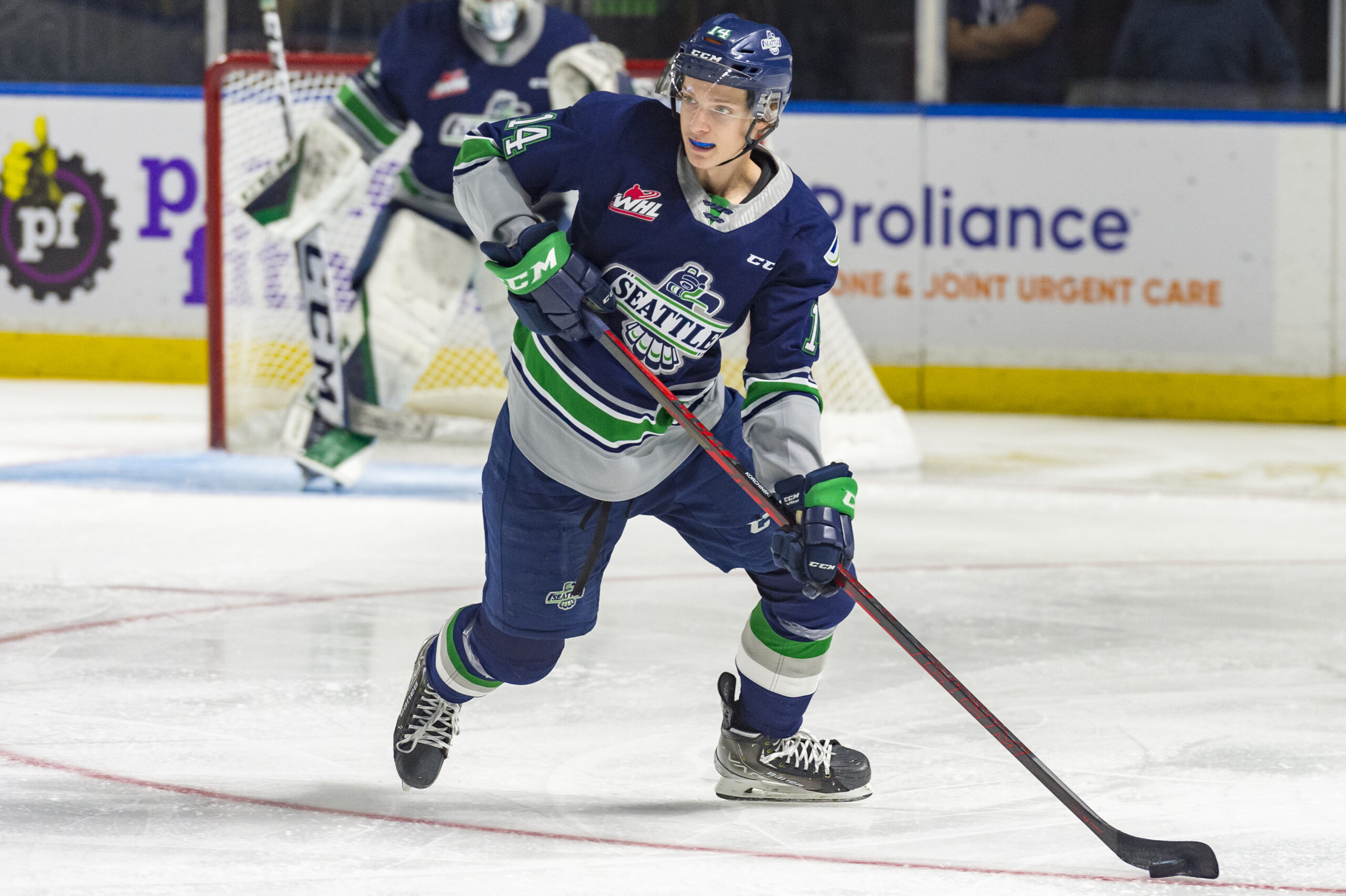 The New York Islanders hold the 13th overall selection in the 2022 NHL Entry Draft. While general manager (GM) Lou Lamoriello can trade the pick for a proven veteran, adding to a roster ready to win now, the team will likely look to refuel the prospect pool, which is currently one of the worst in the league.

The Islanders’ primary needs are in the forward and the defensive units. Particularly, the team is searching for a puck handler that can help an offense that scored only 2.82 goals per game this season and led to head coach Barry Trotz getting fired. As a result, the Islanders will draft a defenseman if not in the first round, then in the second to help address the issue and the upcoming draft class has a handful of prospects that could fall to them.

Kevin Korchinski would be the ideal selection for the Islanders to help out the defensive unit. A playmaker with the puck who can not only start up the offense but also score from the point with a good shot. Moreover, he is a great skater which allows him to create turnovers on the rush and return to the defensive zone to play his position and limit scoring chances for opponents. The Islanders are looking to pair Noah Dobson with another young defenseman and he would fit that bill as a talented prospect, making him an optimal draft target.

Korchinski has his flaws, though, for starters, he struggled on the defensive end of the ice, oftentimes playing out of position. Playing on the Seattle Thunderbirds in the Western Hockey League (WHL), he showed flashes of strong defensive play but in all likelihood, will need to spend time in the American Hockey League (AHL) to refine his play, regardless of the team that drafts him. Additionally, while he is a great puck handler, good forechecking forwards can startle the young defenseman and fluster him, a flaw that will only worsen at the NHL level.

Despite his flaws, Korchinski is still one of the best defensemen in the upcoming draft. The Islanders’ biggest obstacle will be the top prospect falling to the 13th overall selection. He will likely be selected by a handful of teams searching for a two-way defenseman but if he falls, the Islanders should eagerly draft him.

Like Korchinski, Pavel Mintyukov is another elite two-way defensive prospect and one of the top defensemen in the upcoming draft. Playing for the Saginaw Spirit in the Ontario Hockey League (OHL), the two elements of his game that primarily stand out are his skating and shot. Both attributes make him a dynamic skater at the point and in the offensive zone altogether, allowing him to score 17 goals and 45 assists in the 2021-22 season. He also embodies the modern game defenseman as he can handle the puck following a turnover and skate with the rush, providing a more dynamic look for the offense.

While Mintyukov is a promising defenseman, the primary issue the Islanders would have to address is his play in his own zone, as the defensive discipline and ability to force turnovers are still lacking in his play. Also, like Korchinski, he is projected as a top defenseman and will likely be selected early in the draft. The Islanders can hope to land him, but considering the teams drafting ahead of them, it is unlikely he will fall to their pick.

Another great skating defenseman in the upcoming draft class. Denton Mateychuk uses his skating ability to join rushes and help out the offense, where he has a high upside. However, in addition to his great offensive play, he uses his speed to break up rushes from opposing offenses and catch up to forwards who try to find quick scoring chances. For the Islanders, he will likely be available at the 13th selection and a great selection for a team looking to add another potential two-way defenseman to the farm system.

There are a handful of issues the Islanders will have to encounter if they end up selecting Mateychuk. For starters, he is a smaller defenseman, weighing 187 pounds. While a handful of elite young defensemen including Cale Makar, Quinn Hughes, and Miro Heiskanen all weigh under 187 pounds, the size is a concern especially against some of the bigger forwards in the AHL and the NHL, who don’t only win loose pucks on the forecheck but overwhelm smaller, developing defensemen. Aside from his lack of size, the former Moose Jaw Warrior was oftentimes out of position defensively, allowing opponents to create scoring chances and find open shots in the offensive zone, an issue that could ultimately be his downfall at the next level.

Mattias Havelid is a smaller defenseman that is projected to be available in the second round but he can provide great value to any team that selects him. Playing in Sweden for Linköping HC, he possessed strong instincts and great control of the puck, particularly with great passes and shots in the offensive zone from the point. He might not have the same upside as the other defensemen in the draft, but as a second-pairing defenseman, he can put together a respectable NHL career and along with his goaltending twin brother Hugo, looks to become the next great twin duo in the game.

Havelid is still a developing defenseman and needs to improve, especially on the defensive end of the ice. Also, like Mateychuk, weighing 172 pounds, his size is a concern for any team looking to draft him. However, if the Islanders prefer to select a forward in the first round and Havelid is available, he would be a valuable selection in the second round and potentially emerge as a second or third pair defenseman on an already great defensive unit.

Unlike many of the defensemen in this draft, Owen Pickering doesn’t have the same offensive skill. However, he is a strong contributor from the point and effectively carries the puck out of his own zone. Moreover, on the Swift Current Broncos, he displayed great defensive zone presence and played a big role on the defensive unit with a strong disciplined game. He might not be a big splash draft selection, but the Islanders would add a great defensive defenseman in the second round if he is available there.

Other Defensemen The Islanders Can Select

The upcoming draft is a pivotal one for the Islanders, as the team is looking to compete for the Stanley Cup next season under first-year head coach Lane Lambert but also refuel the prospect pool in the pro. As a result, Lamoriello is hoping to find some hidden gems in the upcoming draft, which could ultimately keep the team’s championship window open.

Mike Fink joined The Hockey Writers in November 2020 and covers the New York Islanders. In addition to covering the Islanders, Fink writes about the NHL at large and contributes as a weekly guest to The Hockey Writers Podcast. Follow Mike on Twitter @Finks_thoughts for more Islanders and general hockey insights.