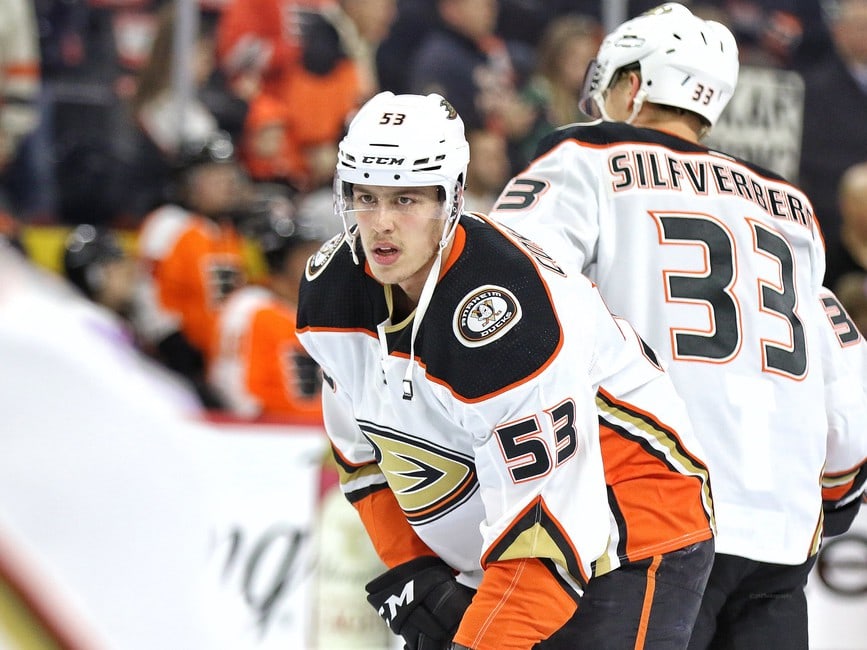 The Boston Bruins and Anaheim Ducks are no strangers to making trades with one another. This is a trend that we could see continue this summer. The Bruins have holes that they need to address this offseason if they hope to go on one last long playoff run with this core. The Ducks, on the other hand, are still rebuilding and seem destined to make several moves this summer. With all of this, these two could be ideal trading partners over the summer. Let’s now look at three Ducks who the Bruins should target.

During the 2020-21 season, Max Comtois had a team-leading 33 points in 55 games for the Ducks. Yet, this year went in an opposite direction, as he had six goals, 10 assists, and a minus-17 rating in 52 contests. Because of his struggles, he was also a healthy scratch numerous times throughout the campaign. With all of this, the Quebec native could benefit from a fresh start, and the Bruins should consider targeting him.

With Comtois being just 23 years old and already having past success in the NHL, he is a prime bounce-back candidate for the 2022-23 season. Perhaps joining a much stronger team could be just what the Quebec native needs to find his previous form. When looking at his potential placement in Boston’s lineup, he could be an ideal fit on their third line. If he bounces back, he would be a significant upgrade over Trent Frederic.

Speaking of Frederic, he could be a roster player who heads the other way in a deal centering around Comtois. The 24-year-old struggled immensely during the playoffs, as he did not record a single point and was a healthy scratch twice. Due to Comtois having a higher ceiling, the Bruins would have to include a little more in a hypothetical swap. Perhaps a mid-round pick or mid-tier prospect could get the job done.

Derek Grant quietly put together a very good season for the Ducks in 2021-22. In 71 games, he set new career-highs with 15 goals, 14 assists, and 29 points. It was an impressive campaign for the bottom-six forward, but even more so when remembering that he was placed on waivers at the start of the year. However, his solid play not only helped him regain his roster spot but also led to him having one of the best years of his entire career.

Related: Bruins That Got Away: Kris Versteeg

With the Ducks rebuilding and Grant entering the final year of his contract, they should take advantage of his trade value being a little higher. If officially made available, the Bruins could be one of the teams who target the 32-year-old. This will especially be the case if pending unrestricted free agents (UFA) Curtis Lazar and Anton Blidh end up signing elsewhere. Grant’s versatility would allow him to play center and left-wing in the team’s bottom-six, so he could replace either of those players.

Grant isn’t a player who would bring in the biggest of returns. A move that could be deemed as comparable is the Nicolas Deslauriers trade that the Ducks made at the deadline. For the enforcer, the club acquired a 2023 third-round pick from the Minnesota Wild. Grant is far less of a physical player than him, however, so perhaps the Bruins could push to give up a fourth-round pick instead for the veteran.

At the trade deadline, the Bruins were linked to John Klingberg. The 29-year-old offensive defenseman of course ended up staying put with the Dallas Stars for their playoff run. Yet, with Boston looking at a player like him, it seems that they would like to add a right-handed, puck-moving defenseman to their roster. One player from the Ducks who plays a similar game to Klingberg is Kevin Shattenkirk.

The 2022-23 season will be the final year of Shattenkirk’s contract, so it isn’t far-fetched to believe that the Ducks will soon be shopping him. The 33-year-old also just put together a very solid campaign, as he had eight goals and 27 assists in 82 games. That kind of production from the point would be huge for the Bruins to add to their roster. If acquired, he could fit well on either the second or third pairing and would be a lock for their power play as well. Either way, he would help strengthen the right side, and that is one of the club’s major necessities.

When it comes to a potential trade centering around Shattenkirk, the Bruins would likely need to part ways with one of their NHL-caliber defensemen. After acquiring Hampus Lindholm and extending Jakob Zboril, the team has a surplus of left-handed defensemen. Mike Reilly could be a player they look to part ways with because of this, but Connor Clifton would work as well. Either way, the Bruins would likely need to add a third-round pick with either one of them to successfully land Shattenkirk.

Nevertheless, it will be interesting to see if these two teams strike another trade this offseason. Adding any of these three players has the potential to benefit the Bruins. Out of the trio, Comtois would be the biggest splash if he bounces back and reaches his full potential. However, Shattenkirk would also be a very good addition to the club, while Grant would be a sweet consolation prize. Alas, time will tell if any of these three are Bruins when the 2022-23 season begins.

Michael DeRosa is a contributor who covers the Boston Bruins and Chicago Blackhawks for The Hockey Writers. Since 2017, he’s written and edited for numerous websites. Besides his work for THW, you can also find him on NHLTradeRumors.me, BBallRumors.com, BaseballRumors.me, FootballRumors.me and The Rat Trick.