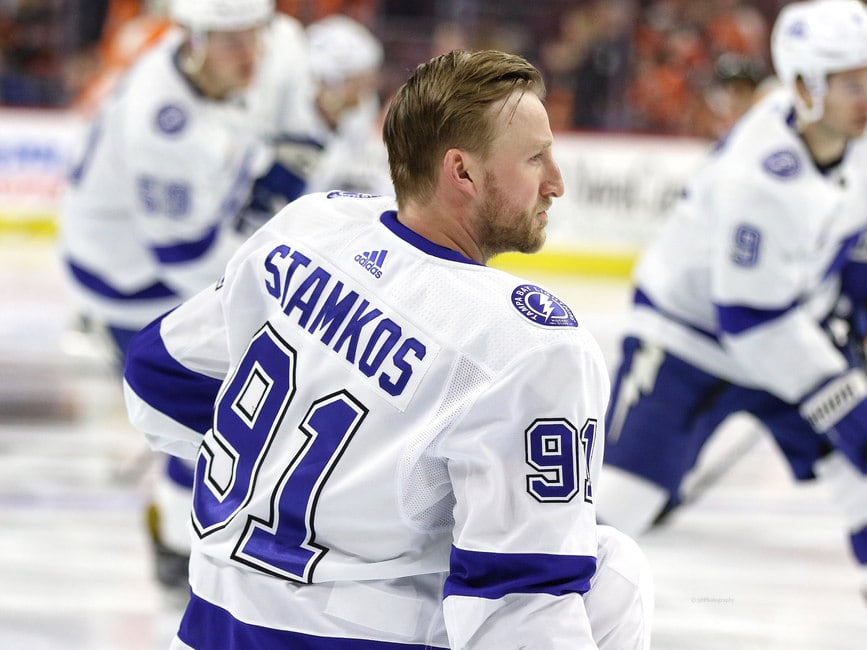 In this edition of “NHL Talk,” these are the top hockey stories with quotes from players, coaches, managers, and more. Check Tom Pepper’s profile every day for a new edition of the “NHL Talk” column.

Toronto Maple Leafs forward Auston Matthew became the first U.S.-born NHL player to reach 60 goals in a season with two goals in a 3-0 win against the Detroit Red Wings on Tuesday. He is the first player in the league to accomplish the feat since Tampa Bay Lightning forward Steven Stamkos tallied 60 goals in 2011-12. Washington Capitals forward Alex Ovechkin is the only other active player to reach the 60-goal mark, scoring 65 goals in 2007-08.

“It’s something I’ve never done before; I’ve come pretty close, so to do it in [my 14th season],” Stamkos said. “I’m more proud of the fact that I’ve probably proved a lot of people wrong. It’s the people that have always believed in me that make these moments pretty special.”

The Carolina Hurricanes clinched first place in the Metropolitan Division with a 4-3 win at the New York Rangers on Tuesday. It marks the Hurricanes’ second divisional title in a row after winning the remodeled Central Division last season. Carolina is having a fantastic campaign, setting single-season franchise records in wins (53) and points (114).

“I tried to say it in there with the guys, that’s a pretty big accomplishment, but it’s just not been our goal from Day 1,” Hurricanes head coach Rod Brind’Amour said. “Even though we had 82 games to try to come in first, it’s kind of hard to be too excited about it because nobody is really going to care about this. … It’s all about the next thing. But it is a big accomplishment. This is a long run. It’s been six or seven months of just grinding it out. We should enjoy it for a night.”

The Edmonton Oilers clinched second place in the Pacific Division with a 5-1 win at the Pittsburgh Penguins on Tuesday. The Oilers will have home-ice advantage against the Los Angeles Kings in Round 1 of the 2022 Stanley Cup Playoffs. It marks the eighth time Edmonton and Los Angeles will face off in the postseason.

“Starting on home ice, I think we’re excited about it,” Oilers head coach Jay Woodcroft said. “It’s a credit to our players’ hard work because it wasn’t easy to secure that.”

The Nashville Predators clinched a berth in the 2022 Playoffs after a 5-4 overtime loss against the Calgary Flames on Tuesday. The Predators were 0.1 seconds away from winning the game in regulation, but the Flames managed to get a final-second goal and steal the win in overtime. The Dallas Stars’ 3-2 shootout win against the Vegas Golden Knights secured Nashville’s eighth-consecutive trip to the postseason.

“I think it’s a real tribute to our players,” Predators head coach John Hynes said. “We certainly deserve to be in the playoffs, the way that I think we played all year and the way the guys have battled. No one picked us to be here. We talked about writing our own story and having a strong team identity and a strong team culture, along with a lot of talent. They worked their [tails] off for 80 games to get here.”

The Stars inched closer to securing the final wild-card spot in the Western Conference with a 3-2 shootout win against the Golden Knights on Tuesday. The Stars and Golden Knights are battling for the final berth in the 2022 Playoffs, with Dallas holding a four-point lead over Vegas. Both teams have two games remaining to determine which club will continue playing into the postseason.

“That’s a very good hockey team we played tonight, and it was a [heck] of a hockey game we’re giving our fans tonight,” Stars head coach Rick Bowness said. “They’re behind us 100 percent. The crowd and the enthusiasm is fantastic. We love the atmosphere here.”

Tom Pepper is a columnist at The Hockey Writers since June 2020. He writes the “NHL Talk” column every day and Anaheim Ducks features every week.