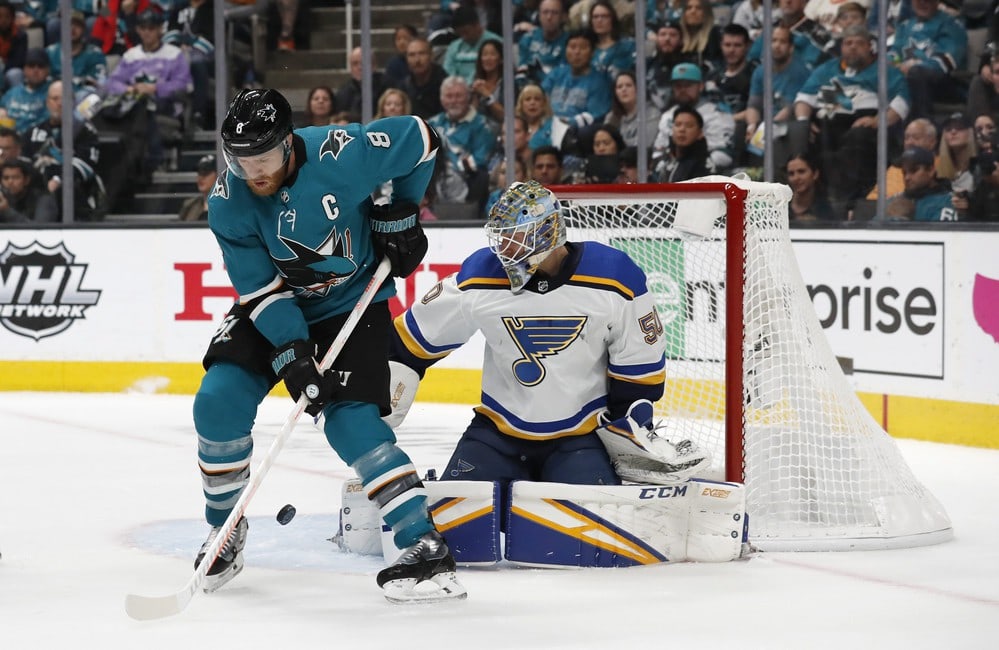 The St. Louis Blues need to get back to their winning ways. Coming off an embarrassing loss to the 2-13-1 Arizona Coyotes on Tuesday, the Blues need to make the necessary corrections to string wins together. They are 0-3-1 in their last four games and have been outscored 15-11. Tonight, they face off against the San Jose Sharks, who are 2-2-1 in their last five games and 4-4-0 against Western Conference opponents.

The last matchup between these teams was on Nov. 4, when the Blues came away with a 5-3 win. Forward Brandon Saad led the charge with two goals, while Tyler Bozak and Robert Thomas each notched two points. Both teams started their backup goaltenders (Joel Hofer and Adin Hill) in their last matchup, but tonight, the Sharks are expected to start James Reimer (4-2-1) and the Blues to start backup Ville Husso (1-0-0).

Here’s a look at a few storylines to follow ahead of Thursday’s game.

The Blues finally received some reinforcements against the Coyotes. Forward Oskar Sundqvist returned to the lineup for the first time since March 18 after undergoing surgery to repair ligaments in his left knee as well as hip surgery to correct a previous ailment. Defensemen Torey Krug returned from the COVID-19 protocol, and the Blues’ top defensive prospect Scott Perunovich also made his much-anticipated debut.

Blues Need to Play 20 minutes at a Time

During the Blues’ four-game losing streak, they have had a difficult time preventing late goals. In two games, they let up game-winning goals within the final three minutes, one within the final 30 seconds. Against the Carolina Hurricanes, at the 17:03 mark of the third period, Hurricanes forward Brendan Smith scored to give his team a 3-2 lead.

Against the Edmonton Oilers, Connor McDavid scored at 19:55 of the 1st period. The Blues then let up back-to-back goals at 16:11 and 16:19 of the 2nd, and after storming back in the third, the Blues let up the game-winning goal at 19:32 to Kailer Yamamoto.

If the Blues want out of their funk, they need more balanced scoring. Jordan Kyrou has four goals during their losing streak, Vladimir Tarasenko has three, and Pavel Buchnevich, Ivan Barbashev, Torey Krug, and Robert Bortuzzo have one each.

The Sharks enter tonight’s matchup with a league-leading 90.24 percent penalty kill, allowing four goals on 41 opportunities. Though the team is hovering just above .500, the Sharks also boast a power play that is ranked 11th in the NHL at 20.93 percent. If they force the Blues into penalty trouble, they could do some damage against a penalty kill that ranks 17th at 81.4 percent.

Logan Couture and Timo Meier are leading the way for the Sharks with a combined 28 points this season. They each have six goals and eight assists in 10 games for Meier and 14 for Couture. The 25-year-old Meier is returning to form after scoring 30 goals and 66 points in 78 games during the 2018-19 season.

After spending the last few years with the Hurricanes and Florida Panthers, James Reimer has seen plenty of early success with the Sharks. He has a 4-2-1 record with a 1.71 goals-against average (GAA), and a .943 save percentage (SV%). Among goaltenders who have played in at least five games this season, Reimer is tied for the NHL’s best SV% with Jack Campbell of the Toronto Maple Leafs.

Blues Next Game: Nov. 20 at the Dallas Stars

Mike is a lifelong fan and enthusiast of the St. Louis Blues. The love of the game was passed down to him by his father and he has never looked back. Since the creation of his personal hockey blog in 2016, Mike has enjoyed spinning his own personal take and love of the game for anyone who wants to read or talk about it. He has enjoyed over a decade of fantasy sports championship wins and the not so fun losing and rebuilding seasons in dynasty leagues. Mike is a longtime fan and follower of not only the Blues, but of the Central or “Norris” division as a whole.