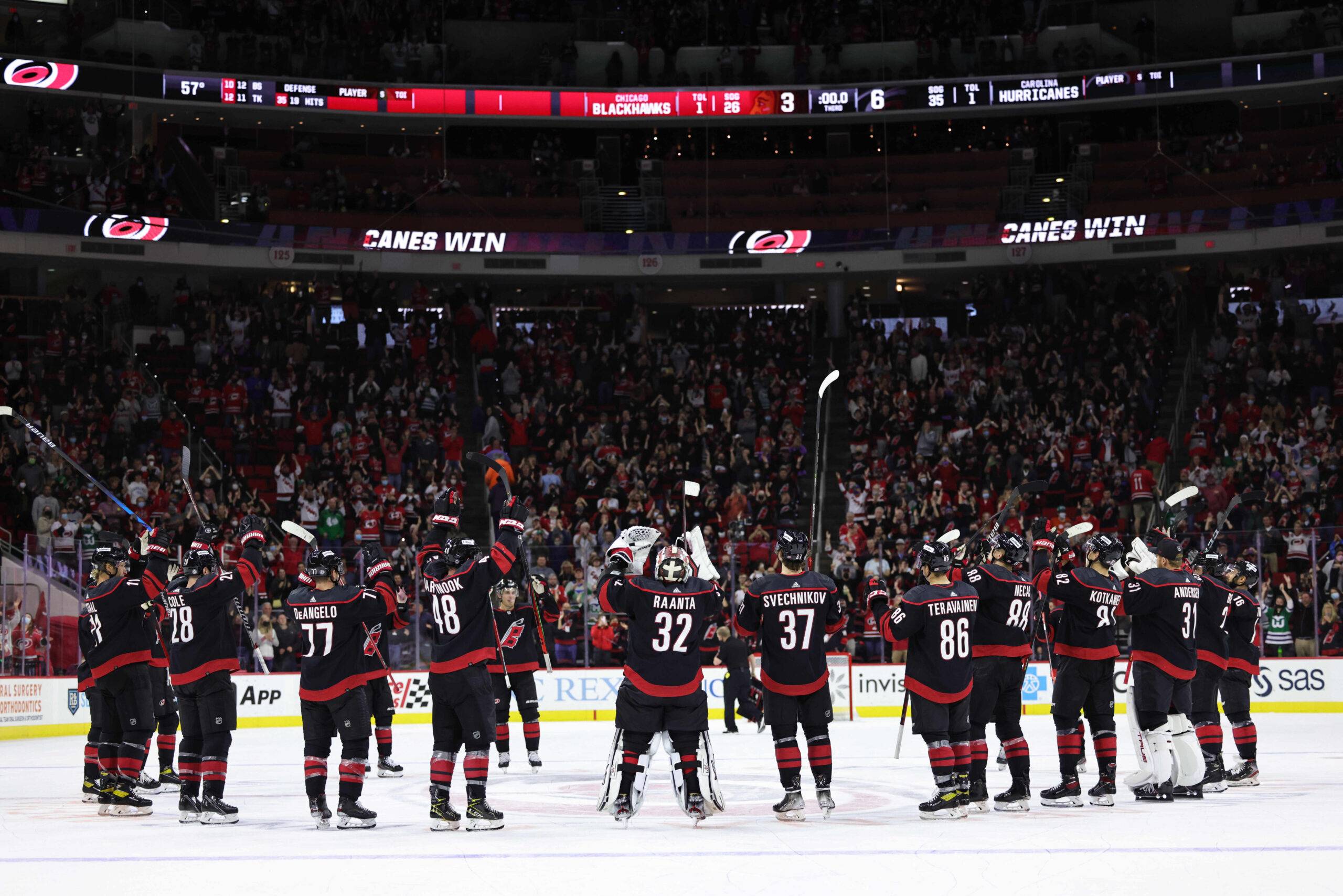 The Carolina Hurricanes eponymous intro song, ‘Rock You Like a Hurricane’, perfectly sums up their start to the 2021-2022 season. As of Nov 16, they have a 11-2-0 record, the best in the league. What is it that is making this year different from last year though?

The Canes started off the first day of Free Agency making some unexpected changes. They lost both goalies in Alexander Nedeljkovic and Petr Mrázek, and after a stellar 2021 season, fans had every right to fret about who would be standing between the pipes come October. What they gave us is looking like a force to be reckoned in every position.

One of the first additions to the Canes was that of defensemen Ethan Bear, who was traded to Carolina from the Edmonton Oilers for Warren Foegele. Coming from a Western Conference team, the average Caniac didn’t know what to expect.

After the Oilers fell to the Winnipeg Jets in the playoffs, the young Cree native experienced an outpouring of racism from disgruntled fans. What Bear will be bringing to the team is unparalleled defensive abilities. He’s a strong and fast player who brings positivity both on and off the ice. Bear already has a lot of fans in Carolina and many have added his jersey, complete with the Cree nameplate, to their collection.

The one-year addition of this young defensemen was met with a lot of backlash from fans, some of which threatened cancelling their season tickets over this deal. His history of racist remarks in the juniors and his departure from the New York Rangers last season after a fight with goalie Alexandar Georgiev left a lot to be seen.

What we got was an all-around offensive-defensemen who already has a Gordie Howe hattrick on the season, the first for the Canes since 2012. Fans on social media are shocked at how much they like the guy and how wholesome he actually is, something I experienced first-hand at a game in Tampa. It seems as though DeAngelo has learned from his mistakes and Caniacs approve of the new and improved Tony.

The Hurricanes strengthened their blue line by adding this veteran on a one-year contract to the list. Cole is coming off of two Stanley Cup wins with the Pittsburgh Penguins in 2016 and 2017. Cole himself even said that when he played for other teams, the Canes always gave them a run for their money on the ice.

He knows how to use his body size to his benefit and to free up the puck from the boards to clear it for his teammates. While he isn’t going to be a star player, he does have the locker room presence that the team is looking for. He’s a natural charismatic leader who can bring his experience to the blue line.

Another one-year contract saw the addition of this 31-year-old to strengthen the offensive line. By adding Stepan at centre, it allowed for Jordan Martinook, who extended his time with the Canes over the summer, to go back to a winger, which better suits his playing style.

The Canes seem to be collecting former Rangers in the same way they collect the Finns, seeing as how Stepan is the sixth player on the Hurricanes roster to have played for the Blue Shirts in his career. The veteran player is a two-way forward who is showing he can bring depth to the forward line.

Most fans outside of Montreal came to know Jesperi Kotkaniemi during the 2021 playoffs where the Finn scored five goals during the playoff run. He came to Carolina via the rarely used method of an offer sheet. Offer sheets are a rarity in the NHL with only five being used since 2010. The Habs not matching Carolina’s offer was the first time an offer hadn’t been matched since the Oilers got Dustin Penner from the Ducks in 2007.

After his rookie season, his numbers dwindled, but Montreal is also a tough city to play for. Carolina could be used as a reset of sorts for the Finn, and give him the chance to build his career back up after his development in Montreal floundered. The Hurricanes have always done a good job at building players up, especially with leadership like Rod Brind’Amour at the helm.

Papa Finn as he is lovingly called by the younger Finns came to the Canes on a two-year contract from the Arizona Coyotes. Ironically, along with Derek Stepan, he had been traded from the Rangers to the Coyotes in exchange for another entry on this list, Tony DeAngelo. He played with the Coyotes for four seasons as a backup goalie but had not been re-signed after his contract expired.

Raanta pulled out a win in his first appearance with the Canes but was injured during an appearance in Florida on Saturday, November 6th. He was flown back to Raleigh after the game and will be joining the Canes on their upcoming western road trip. Raanta has said he enjoys getting to be a mentor to the younger Finnish players like Jesperi Kotkaniemi, Sebastian Aho, and Teuvo Teravainen.

While Andersen had been drafted by the Canes in 2010, he never actually played for them until now. He spent time in Anaheim before going to the Toronto Maple Leafs where he starred for five seasons before injuries plagued him. He shared goaltending duties with Jack Campbell and in the 24 games he played he had a record of 13-8-3.

When he came to Carolina, most Leafs’ fans said Caniacs would soon get annoyed with him and want him gone. That seems to be anything but that case at this point in the season. Even though he let in four goals during the first period against Florida, he is the first goalie in franchise history to go 5-0-0 to start the season and only the second in NHL history to do so in his first five starts with a new team. After Raanta went down during the Florida game, Freddie came back into the net and did not let any pucks through while he was between the pipes.

The ice wasn’t the only place where the Canes added depth. They did so behind the bench as well adding former alternate captain Tim Gleason behind the bench. Gleason was a beloved member of the team and strong on the defensive line.

For Gleason, he is coaching alongside his former captain, Rod Brind’Amour on a team where he spent most of his career. He has the passion for the Canes that drives him to want to see his team succeed. Watching him in action shows that he works well with the coaches and players alike.

Last year’s team was a strong competitor, and many thought they had the chance to go all of the way to the Stanley Cup. Every line had depth and the skills to do so, and they had a coaching staff with the same drive to back them up.

A huge benefit that Canes have that others lack, is having coaches behind the bench who played for the team. Head Coach Brind’Amourwon a Cup with the Canes in 2006 and retired with the team, having his number, 17, retired with him. As mentioned, the new assistant coach, Tim Gleason played for and retired from, the Canes as well. They have the love and the drive and needed to really boost the leadership behind the bench. Coaches who truly love the team and having a fan base who loves them equally is a huge asset to the Canes.

Leadership in the locker room also has a lot to do with the Canes’ success. Captaincy runs in the Staal family, with Jordan taking the mantle his brother Eric had with the Canes. Along with Jaccob Slavin, Jordan Martinook, and Sebastian Aho, the leadership the Canes have on the front lines are all guys who their teammates look up to as leaders for their skills and personalities alike. Outside of the locker room Staal, a born-again Christian, and Slavin, a fellow Christian bring light into the locker room and are known for their ability to bind the team. Jordan Martinook always has a smile on his face and his pregame ‘Mista Svechnikov’ holler always has a way of putting a smile on everyone’s face and get them pumped for the game. Even though Aho is the most soft-spoken of the bunch, he has shined and shown his leadership abilities where it matters.

All of this combines for a record start for the Canes and have every team in the league turning their heads to see what this southern team has to offer. Many people, namely Don Cherry, can argue that hockey has no place in the south, but the back-to-back Stanley Cup Champion Tampa Bay Lightning, the Florida Panthers, who are at the top of their division, and the Carolina Hurricanes feel differently. Hockey is growing in the south and these teams are at the forefront of that.

Many in Raleigh were worried when we lost Dougie Hamilton and the goalies that led us to playoffs, but the line-up of new defensemen and the goalies alike are showing that those fears were for naught. It’s still early in the season, but with a perfect October, this could be the year the Canes go all the way. What is true is that after the end of last season, Carolina is hungry for the Cup and this particular Bunch of Jerks has a good chance of getting us there.

I was born and raised in Pittsburgh, PA where I spent 21 years of my life before moving to Orlando, Florida. I started my hockey career as Keeper of Time for the California University of PA Vulcans hockey club during university. Even though I live in Florida I’ve always been a huge Caniac and thus cover the Canes.

Canadiens Who Just Missed Out on Calder Trophy Before Caufield
10 Greatest LA Kings of All Time
Onyebuchi excited to be back for year two
Flames sign newly-acquired star Huberdeau to 8-year, $84 million US extension
Canada scores early, often to down Sweden, claim gold in Hlinka Gretkzy Cup