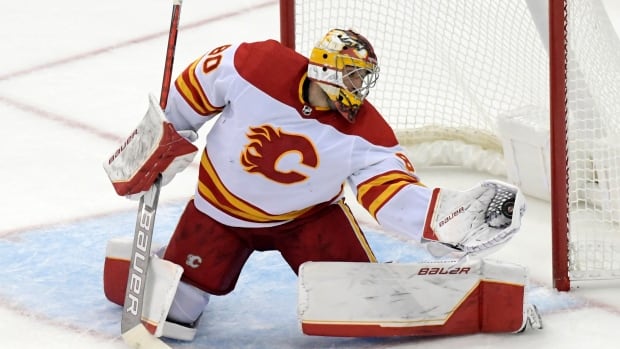 A mid-November game won’t likely stand out for too many players, but for Dan Vladar this will be one to remember.

The Calgary Flames netminder made 27 saves to post his first career shutout in a 4-0 win over the Ottawa Senators on Sunday.

Vladar was making just his ninth career start as the Flames work their way through a seven-game road trip.

“From the get-go, we were just the better team,” said Vladar. “More focused and the guys played great in front of me. I had no rebounds. So, easy game for me.”

As the final buzzer sounded teammates were quick to swarm Vladar as the win also snapped a three-game losing streak.

The Flames (8-3-4) were led by Elias Lindholm with a goal and an assist, while Andrew Mangiapane, Matthew Tkachuk and Nikita Zadorov also scored. Sean Monahan had two assists.

“I think physically we were really, really engaged,” said Flames head coach Darryl Sutter. “Those two games in Montreal and Toronto (both losses) are hard games. They take a lot out of your team. Besides the travel, they’re hard games to play. So, this is a really good gut check for our team. They did a really good job.

“Mentally, they’re probably not as sharp as they need to be, but physically they were really good.”

The Senators (4-10-1) had a decent start, but just couldn’t match up against the Flames for 60 minutes.

Anton Forsberg, making his first start since Oct. 25, made 29 saves for Ottawa.

Senators undermanned due to COVID-19 protocols

The Sens could easily make excuses as the team continues to be ravaged by COVID-19, but coach D.J. Smith admitted his men just didn’t play well enough.

“We weren’t our sharpest, especially our top guys and that’s understandable,” said Smith. “I thought we did have some good efforts, but at the end of the day they just overwhelmed us with their four lines and six D.”

Once again the coach was forced to juggle his lines at the last minute.

Drake Batherson became the 10th Ottawa player to enter the NHL COVID-19 protocol. The Senators made the announcement less than an hour before puck drop, which led to Andrew Agozzino making his season debut.

The Senators have had 10 players test positive for COVID-19 in the past 10 days.

“Every day there’s something unexpected that happens, so of course it kind of wears on you mentally, but we trust in everything that the medical guys have given us,” said Brady Tkachuk.

This marked the first meeting between the two teams and there is always excitement on Brady’s part as it’s an opportunity to face off against his big brother, Matthew. Brady gave full marks to the Flames for their effort.

“They looked good,” he said. “They dominated us tonight (Sunday) and we didn’t have many offensive-zone shifts or offensive-zone chances and they did a great job top to bottom and worked hard to the very end. That wasn’t a fun one to play. They were all over us.”

Matthew admitted it was fun to see Brady with the “C” on his jersey, but was happy his team picked up the win.

“They worked hard tonight, but I thought we worked smarter,” said Matthew. “We had the puck more, we played in their zone more, played solid defensively in front of Dan [Vladar] and he was there to bail us out when we had issues.”

The Flames made it 4-0 in the opening minutes of the third period as Zadorov beat Forsberg with a quick wrist shot.

Calgary took a 2-0 lead early in the second when Lindholm tipped a Rasmus Andersson point shot, and midway through the period Tkachuk made it 3-0 with a power-play goal as he roofed a shot over Forsberg.

The Flames opened the scoring late in the first as Mangiapane, with his 10th of the season, tipped Monahan’s high slot shot.