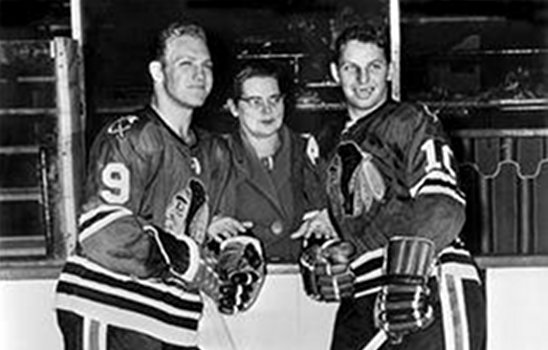 This extremely busy day in National Hockey League history included a little bit of everything. For the first time, a team used three goaltenders to win a game, and a penalty-shot goal was scored. In addition, three members of the same family each hit personal milestones in three separate decades. So, let’s take our daily trip back in time to enjoy all the great memories Nov. 13 has given us.

The St. Louis Blues picked up a bizarre 3-1 win over the New York Rangers on Nov. 13, 1968, as they needed to use three different goaltenders to pull it off.

Rookie goaltender Robbie Irons came off the bench to replace Hall. However, bad luck struck when he injured his leg while warming up. He tried to tough it out but was removed from the game about three minutes later.

Future Hall of Famer Jacques Plante came down from the press box, threw on his uniform, and was on the ice before the game was even five minutes old. Plante made 21 saves to pick up the win. On a side note, Irons’ three minutes on the ice was the only appearance of his NHL career.

Long before getting kicked out of the game against the Rangers, on Nov. 13, 1955, Hall was involved in an epic goaltender duel during his rookie season. He and Terry Sawchuk battled in a scoreless tie between the Detroit Red Wings and Boston Bruins. It was already the fourth shutout of Hall’s career and the 61st for veteran Sawchuk.

On that same night, Plante recorded his second shutout in two nights in the Montreal Canadiens’ 2-0 win at the Chicago Blackhawks. This was the 15th shutout of his career.

Tony Esposito made 34 saves on Nov. 13, 1982, to lead the Blackhawks to a 3-2 win at the Red Wings. Tom Lysiak’s power-play goal in the third period was the difference-maker in Esposito, becoming the fourth goaltender in NHL history to win 400 games.

Pat Jablonski made 38 saves on Nov. 13, 1992, to earn the first shutout in Tampa Bay Lightning franchise history with a 1-0 win over the Ottawa Senators. Brian Bradley scored the only goal of the night, one of 42 he had during the 1992-93 season. This was Jablonski’s first and only shutout of his NHL career.

That same night, Craig Billington recorded the third shutout of his career in the New Jersey Devils’ 3-0 win over the Washington Capitals. With the victory, the Devils alternated wins and losses in 13 straight games, setting an NHL record.

Mike Richter picked up his fifth career shutout on Nov. 13, 1993, in the Rangers’ 2-0 victory at the Capitals. Mike Gartner scored a goal and added an assist against his former team give his current team their seventh straight win and extending their unbeaten streak to nine games (7-0-2).

A Big Date for the Hull Family

Bobby Hull scored twice and added two assists to give him 400 career NHL points on Nov. 13, 1963, as the Blackhawks beat the Bruins 6-4. He scored 1,153 points before leaving for the World Hockey Association (WHA) in 1972, the second-most in franchise history.

Dennis Hull, Bobby’s younger brother, became the third-highest goal-scorer in Blackhawks team history on Nov. 13, 1975, when he scored his 259th career goal in a 5-5 tie with the Philadelphia Flyers. Hull’s 298 goals are still seventh on the all-time franchise goal list.

On Nov. 13, 1986, Brett Hull scored his first career NHL goal in the Calgary Flames’ 4-3 win over the Hartford Whalers. He went on to score 741 goals in his career, the fourth-most in league history. Bob Johnson earned his 157th career victory on that night to become the winningest head coach in Flames history. He is still the all-time leader with 193 wins behind the bench in Calgary.

Dino Ciccarelli scored a pair of goals on Nov. 13, 1987, in the Minnesota North Stars’ 5-4 road win at the Buffalo Sabres. This gave him 268 career goals to become the all-time leading goal-scorer in franchise history. He scored 332 goals before being traded to the Capitals in 1992, which are still the third on the team’s all-time list.

One year later, on Nov. 13, 2000, Jaromir Jagr scored twice to hit the 400 NHL-goal plateau in the Penguins 3-2 overtime loss in overtime in Colorado. Jagr became just the second player in Penguins history to score 400 goals, joining his former teammate Mario Lemieux. Both Sidney Crosby and Evgeni Malkin have since joined the 400-goal club in Pittsburgh.

Rene Robert scored his second career hat trick and added an assist on Nov. 13, 1974, to lead the Sabres to an 8-6 win over the Canadiens. This was Buffalo’s first win in Montreal in their fifth NHL season. Habs defenseman Guy Lapointe scored the only hat trick of his career in the losing effort.

On Nov. 13, 1997, the NHL’s expansion franchise in Nashville announced the team would be called the Predators. They officially joined the league at the start of the 1998-99 season.

The Capitals played their 2,000th game in franchise history on Nov. 13, 1999, and beat the Devils 4-3, with Adam Oates scoring a goal and adding an assist.

Speaking of road wins, on Nov. 13, 2006, the Sabres beat the Hurricanes 7-4 in Carolina. This extended their NHL for the most consecutive road victories to start a season to 10. This was the final win of this streak, which is still the longest in league history.

Ralph “Scotty” Bowman scored the first penalty-shot goal in NHL history on Nov. 13, 1934, in the St. Louis Eagles’ 2-1 loss to the Montreal Maroons. His historic goal came on just the second penalty shot ever awarded. No, this is not the same Scotty Bowman who has the most coaching victories in league history.

On Nov. 13, 1983, both Mike Foligno and birthday boy Gilbert Perreault scored hat tricks to lead the Sabres to an 11-2 win over the Flames. This extended their unbeaten streak at the Memorial Auditorium to eight games (7-0-1).

Bernie Nicholls became the first player in NHL history to score in all four periods on Nov. 13, 1984, during the Kings’ 5-4 overtime win versus the Quebec Nordiques. He scored in the first, second, and third periods before winning the game three minutes into overtime.

The Columbus Blue Jackets fired head coach Gerard Gallant on Nov. 13, 2006, after a 5-9-1 start to the season. Gary Agnew was named interim head coach and went 0-4-1 before Ken Hitchcock was named as the permanent replacement.

The Bruins beat the Canadiens 6-1 on Nov. 13, 2008, to end a 12-game losing streak against their most hated rival. Marco Sturm and Stephane Yelle led the way with two goals apiece.