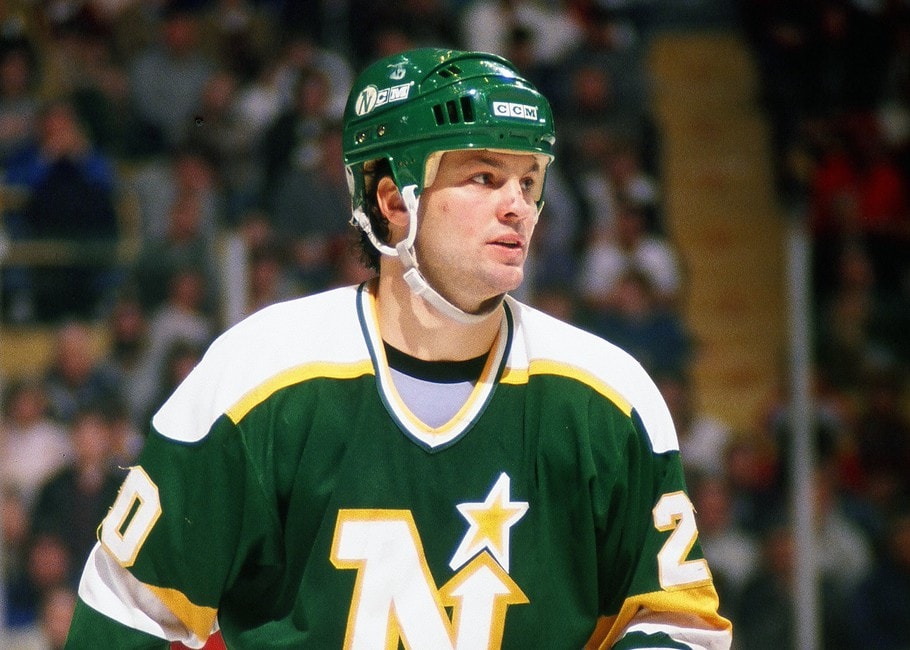 Minnesota is rich in hockey history and this date brought some big moments over the years. Also, there were plenty of big offensive performances including some from defenders on the back end. The first-ever empty-net goal in National Hockey League history was scored and a new franchise revealing its name are among the other memories to occur on Nov. 11.

The Minnesota North Stars were part of the 1967 expansion that saw the NHL double in size from six teams to 12. They remained in the Twin Cities until they relocated to Texas and became the Dallas Stars in 1993. In their 26 seasons in Minnesota, the team advanced to the Stanley Cup Final twice, in 1981 and again in 1991. Nov. 11 was a pretty eventful date during the franchise’s time in Bloomington.

On Nov. 11, 1976, the North Stars traded Bill Goldsworthy, their all-time leader in games played, goals, assists, and points to the New York Rangers, in exchange for veterans Bill Fairbairn and Nick Beverley. Goldsworthy played in 68 games in New York, scoring 10 goals and 23 points, before joining the World Hockey Association (WHA) in 1978. Fairbairn and Beverley combined for 18 goals and 70 points in 166 games for the North Stars.

Bobby Smith, the first overall pick of the 1978 NHL Amateur Draft, and the North Stars had a huge night on Nov. 11, 1981. Smith scored four goals and added three assists for a seven-point night. Two of those goals came during an eight-goal second period as Minnesota crushed the Winnipeg Jets 15-2. They became just the second team since the addition of the red line in 1943 to 15 goals in a game. The previous team to do so was the Detroit Red Wings beat the Rangers 15-0, on Jan. 23, 1944.

Dennis Maruk scored twice to give him 300 career goals on Nov. 11, 1984, as the North Stars earned a 7-6 road win at the Toronto Maple Leafs. He scored 356 goals during his 14-season NHL career, 80 of them came in two separate stints with the North Stars.

Dino Ciccarelli scored a pair of goals on Nov. 11, 1986, in Minnesota’s 2-2 tie with the Washington Capitals. This performance gave him 20 goals in just 15 games, setting a modern-day record for the fastest 20 goals scored from the start of a season. Pittsburgh Penguins legend Mario Lemieux tied this record to start the 1992-93 season. The all-time record is held by Joe Malone, who scored 20 goals in his first seven games of the league’s inaugural season of 1917-18.

Smith and the North Stars were not the only ones to enjoy a big points night on this date. Starting on Nov. 11, 1958, John Bucyk scored his second career hat trick and added two assists, while Don McKenney had two goals and three assists to lead the Boston Bruins to an 8-4 win at the Chicago Blackhawks.

Rick MacLeish recorded his 11th career hat trick and 550th NHL point on Nov. 11, 1979, as the Philadelphia Flyers beat the Vancouver Canucks 5-4. He finished his career with 12 regular-season hat tricks and three in the playoffs, all with the Flyers.

A pair of New York Islanders greats had big nights on this date. On Nov. 11, 1980, Mike Bossy scored four times for his 11th career hat trick, during a 6-6 tie with the North Stars. Exactly three years later, Bryan Trottier scored his 14th career hat trick in the Islanders’ 6-5 win at the Penguins.

Rookie Stu Barnes scored his first of four career hat tricks on Nov. 11, 1991, with all three goals coming in the third period of a 6-2 Jets’ win over the Los Angeles Kings. This was the first Jets’ hat trick in 185 games with the previous one scored by Thomas Steen on March 18, 1989.

On Nov. 11, 2010, Alexander Semin stole the show in the Capitals’ 6-3 win over the visiting Tampa Bay Lightning. He overshadowed other stars on the ice like teammate Alex Ovechkin and Steven Stamkos with three goals in the third period and two assists. His five-point night gave Washington their sixth straight victory.

Defenseman Larry Robinson scored a goal and added three assists on Nov. 11, 1980, to lead the Montreal Canadiens to an 8-2 win over the Colorado Rockies. Nine years later, on Nov. 11, 1989, Robinson the first game against his former team as the Kings beat the Canadiens 5-4. It was his 18th game with the Kings and the 1,220th of his NHL career, placing him 20th on the all-time games played list.

Mark Howe picked up his 500th career assist on Nov. 11, 1991, as the Red Wings lost 6-4 at the Tampa Bay Lightning. He finished his career with 545 assists, the 21st-most by a blueliner in league history.

Calle Johansson became the second defenseman in Capital’s history to record 300 assists on Nov. 10, 1999, as Washington lost 5-4 to the visiting Rangers. He retired with 361 assists, which were the most by all Capitals’ defensemen until John Carlson passed him up during the 2019-20 season.

Rookie Jay Bouwmeester scored his first career NHL goal on Nov. 11, 2002, as the Florida Panthers and Blackhawks skated to a 2-2 tie. He scored 53 of his 88 career goals during his six seasons with the Panthers.

Andy Greene scored on an overtime penalty shot on Nov. 11, 2016, to give the New Jersey Devils and 2-1 win over the Buffalo Sabres. He became the first Devils player to ever score an overtime penalty-shot goal. He was also the first New Jersey defenseman to score on a penalty shot since Scott Niedermayer did exactly 18 years earlier, on Nov. 11, 1998.

The city of Philadelphia hosted its first-ever NHL game on Nov. 11, 1930, as the Quakers lost to the Rangers 3-0. The Quakers went 4-36-4 during their one and only season in the league. The NHL did not return to Philadelphia until the Flyers debuted in 1967.

Clint Smith scored twice on Nov. 11, 1943, including the first empty-net goal in NHL history. Bruins’ head coach Art Ross pulled goaltender Bert Gardiner with his team down a goal and Smith made history with less than a minute to play to give the Blackhawks a 6-4 victory.

On Nov. 11, 1962, Terry Sawchuk became the first goaltender in franchise history to record 350 victories as the Red Wings beat the Rangers 3-2. Alex Delvecchio led the scoring with a pair of goals.

Tragedy struck the hockey world, on Nov. 11, 1985, when Flyers’ goaltender Pelle Lindbergh died a day after suffering severe injuries in an automobile accident. The Swedish-born goaltender had played in 157 games for the Flyers over five seasons. He played in 65 games during the 1984-85 season which saw him win the Vezina Trophy and help the Flyers advance to the Stanley Cup Final. He received the most fan votes for the 1986 NHL All-Star game, marking the first time a player was chosen posthumously for an All-Star team in a major North American team sport.

Guy Lafleur scored a goal on Nov. 11, 1989, to help the Canadiens get past the Quebec Nordiques 3-2. This was the 544th goal of his career, tying fellow Montreal legend Maurice Richard for the eighth-most all-tine. When Richard retired in 1960, his 544 goals were the most ever scored in NHL history.

The new NHL franchise in Columbus, OH announced that the team would be called the Blue Jackets on Nov. 11, 1997. The announcement came just less than three years before they debuted in the 2000-01 season.

Joe Sakic picked up three assists, on Nov. 11, 2000, to become the Colorado Avalanche’s franchise all-time leader in assists. He broke the old record of 668 assists, held by Peter Stastny, in a 3-1 win over the Mighty Ducks of Anaheim.

A total of 15 current and former NHL players have been born on Nov. 11. The best of this group includes Michel Bergeron (67), Steve Konowalchuk (49), Chris Kelly (41), Jean-Gabriel Pageau (29), and the late Hall of Fame goaltender, Harry Lumley.