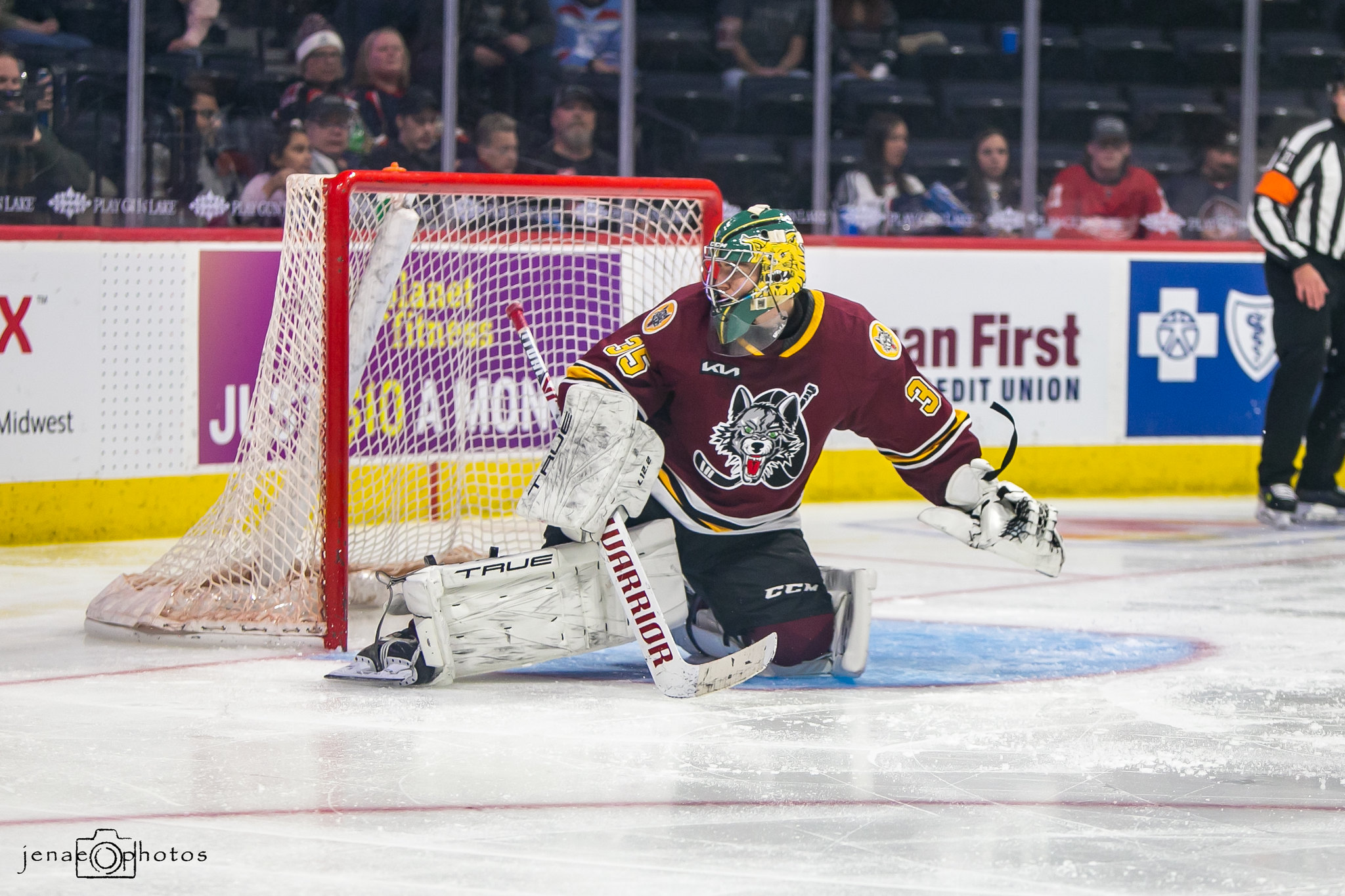 Welcome to the first installment in what I plan to build into a weekly segment at The Hockey Writers — checking in on Carolina Hurricanes prospects. In this column, we’ll be taking a look at Hurricanes prospects that are standing out and enjoying success, whether they’re playing in Canadian juniors, the American Hockey League (AHL), Europe, or anywhere around the world.

With a prospect group that’s been ranked amongst the best in the NHL over the past few years, there’ll never be any shortage of storylines to talk about. The Hurricanes have drafted 33 players over the past three years alone and have made it a major organizational focus to build with their youth. We’ve seen players like Martin Necas, Jake Bean, and Alex Nedeljkovic graduate prospect status over the past couple of seasons, and the team has had a successful history in developing their youngsters. Without further ado, let’s take a look at some players who’ve made waves since the start of the 2021-22 hockey season!

Welcome To The NHL, Seth Jarvis

With only a handful of NHL games under his belt, Seth Jarvis still classifies as a prospect under all criteria. He’s only 19, and he made his NHL debut just a week ago — and it’s hard to imagine any way that it could’ve gone better for him. He capped the game off with an assist on Brett Pesce’s game-winning goal in the Hurricanes’ 2-1 win over the Arizona Coyotes and made a phenomenal back-check during the third period that stalled a breakaway for Coyotes forward Antoine Roussel. In his second game, he scored his first NHL goal, in beautiful fashion:

In the grand scheme of things, it’s been a dream transition into pro hockey for Jarvis so far. He’s begun earning coach Rod Brind’Amour’s trust — with his ice-time jumping five minutes higher in his third game than his previous two. And he fits in super well. His skill and speed make him a seamless fit with the Hurricanes’ fast-paced play style, and despite being a bit out-matched physically, it hasn’t noticeably held him back yet. The team has six more games before they need to decide to either keep him in the NHL and burn a year of his entry-level contract or send him back to the WHL. Thus far, he’s made a real case to stick around.

Eetu Mäkiniemi Off To Fantastic Start In Chicago

I’ve become a huge fan of Mäkineimi and his pro potential over the past couple of seasons, and I was very excited to track his progression in the AHL after he finally made the move to North America this past summer. He’d spent the entirety of his career in Finland prior to signing his entry-level contract with the Hurricanes back in April — four years after the team selected him in the fourth round of the 2017 NHL Draft. Through his first five AHL games with the Chicago Wolves, he’s compiled a 4-1-0 record, along with a 2.22 goals-against average (GAA) and a .927 save percentage (SV%).

He was named the First Star of each of his first two starts in the AHL and has really looked the part. His SV% currently ranks fifth amongst qualified goaltenders, which is particularly impressive when you consider that Mäkiniemi is adapting to a different style of hockey than he’s been used to overseas. At only 22 years old, he looks to have a very bright future ahead of him. Antti Raanta’s injury this past week has led to the Hurricanes recalling goaltender Alex Lyon from the Wolves, so Mäkiniemi figures to be their unquestioned starter for the next little while. Consistent starts are what he needs to develop, and he’s made the most of his opportunities so far. I’m all aboard the hype train.

Ville Koivunen Having Success In Liiga

Meanwhile, over in Finland, winger Koivunen has commanded attention with a fiery-hot start to his season. The Hurricanes selected him in the second round of the 2021 NHL Draft after trading out of the first round in a deal with the Nashville Predators. He was playing for the storied Karpat program — the same program that produced a certain player named Sebastian Aho — and is also managed by his father, Harri Aho, whom the Canes’ scouting department gave a lot of credit too for recommending the player.

After dominating at the U20 level during the 2020-21 season, Koivunen has moved up into Liiga and has picked up where he’s left off. Through 19 games, he’s posted six goals and five assists — which is very impressive for an 18-year old player. In fact, he ranks third in scoring amongst all U20 players in that league so far this season, which includes highly-touted prospects such as Roni Hirvonen, Aatu Raty, and Brad Lambert.

It’s hard to imagine a better place for Koivunen to develop. Karpat has been a phenomenal developmental team for the NHL over the years — producing talents like Aho, Niklas Backstrom, Jesse Puljujarvi, and Jussi Jokinen, amongst many others. His foot speed has been a concern for scouts, but if he can improve by even a half-step in that regard, he’s a player that has a mountain of potential. He’s a gifted offensive presence with slick hands, great vision, and a quick release. He’s a very fun player to watch, and he’s already signed his entry-level deal with the Hurricanes!

Keeping A Close Eye On…..

Tuukka Tieksola: After a breakout season with Karpat in 2020-21 (nine goals and nine assists in 37 games), I was hopeful for another big step forward from Tieksola this season. Unfortunately, consistency in his overall game has seen him stuck in a bottom-six role, and he has only four points in 15 games. He has all the natural talent in the world, but he’s very undersized (5-foot-10, 154 pounds) and has been known to disappear for large stretches of games. It’s hard to earn a coach’s trust like that, but he’s still only 20 and has time to figure it out. Notably, Koivunen has seemingly jumped him on Karpat’s depth chart.

Patrik Puistola: In the scouting process leading up to the 2019 NHL Draft, many scouts had pegged Puistola as a potential first-round talent….but those days are long gone. He’s bounced around between five separate Liiga teams over the past year and has been unable to make a real impact with any of them. The problem for him is that he’s very one-dimensional. He’s not a great skater, puck carrier, or playmaker; he’s not very physical and struggles in his own end. He’s flashed the ability to score from in-and-around the front of the net, and he’s improved his acceleration a tad. But this kid is a long-term project. He was cut by JYP after just two games this season, but the good news is that he’s been given more of a role since being picked up by Jukurit. He’s also still only 20, so it’s not time to close the book on him yet — but he really needs to show us something this season.

Kirill Slepets: It’s been a whirlwind of a career for Slepets since the Hurricanes selected him as a double-overager back in the fifth round of the 2019 NHL Draft. His progression was on the rise, and he looked to finally be on the cusp of locking down a full-time KHL role, as he had a 33-game stint with Dinamo Riga in 2019-20. Since then, he’s been relegated to the Russian minor leagues, and his production has taken a serious dip. He’s only 22, he’s a noticeably hard worker and has NHL-level speed and hands, but the clock is starting to tick here. His development has seemingly hit a wall over the past year, he’s undersized (5-foot-10, 165 pounds), and he continues to struggle with consistency. His hands really are incredible, though:

The important thing to remember with prospects is that development is non-linear. At any point, the light could turn on or off for any particular player, and their progression could take a complete turn the opposite way. Some teams can’t afford to whiff on draft picks, but the depth that the Hurricanes have amassed in their prospect pool gives them flexibility. They have an overload of bodies and a wide array of prospects with skill, size, speed, and hockey sense. It’s a group as deep and as talented as any in the league, and they’ll be a ton of fun to track throughout the season.