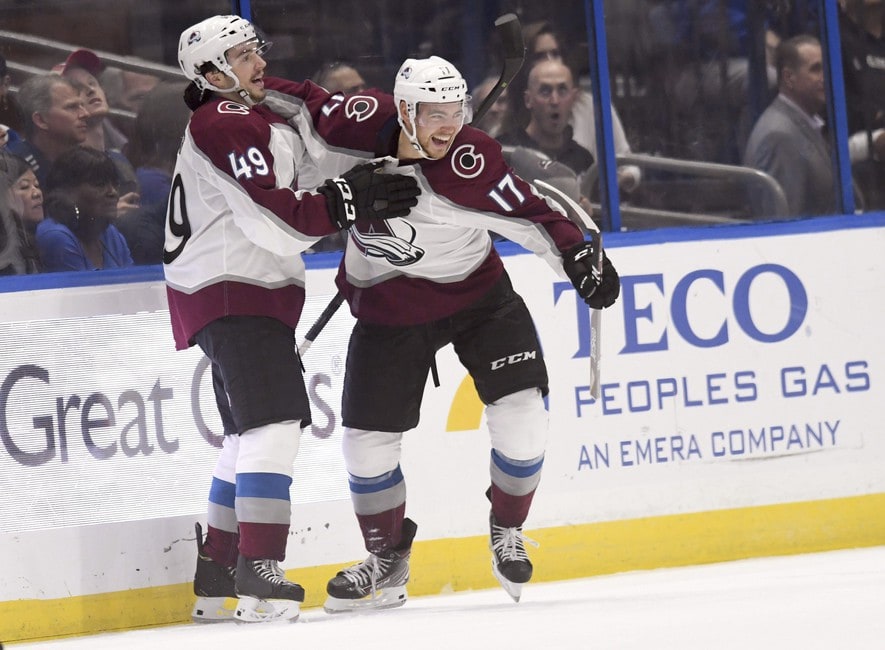 In today’s NHL rumors rundown, the Colorado Avalanche are deep on the left side of their blue line. Does that mean they’re making Samuel Girard available in a trade? Is Erik Brannstrom looking for a trade out of Ottawa? The Chicago Blackhawks will not be hiring a permanent coach this season and what’s the latest on contract talks with Filip Forsberg of the Nashville Predators?

Girard Could be Shopped by Avalanche

Mike Chambers of the Denver Post is reporting that because of the strong play by 20-year old defenseman Bowen Byram and with Devon Toews back from injury, the Avs are deep on the left side of their blue line and defenseman Samuel Girard has become expendable in Colorado. Chambers writes:

Girard, 23, is also a special player, a puck-possession/moving gem of a skater. He’s off to a slow start (two assists and minus-6 in seven games entering Saturday) but usually does things most defensemen can’t do. Byram, however, does it better, already, and the Avs had the opportunity to ship Girard plus (fill in the blank) to Buffalo for Eichel — if only the Sabres would have agreed to retain some of Eichel’s $10 million cap.

The assumption here seems to be that if Girard was made available in an Eichel trade, he would be available in another move, assuming Sakic felt it would help the team. Girard’s $5 million annual cap hit goes through the 2026-27 season and at that number and with long-term contract control, there would be interested teams.

Is Erik Brannstrom Frustrated in Ottawa?

As per an article by Ian Mendes of The Athletic, Erik Brannstrom starting in the AHL this season has some in Ottawa wondering if the player is frustrated with his situation. That he changed agents has others wondering if he’s asked for or is ready to ask for a trade.

Mendes believes he was placed in the AHL because he is waiver-exempt and the team needed to move a body. He also doesn’t think the Senators are shopping him. Mendes writes:

Now, my sense of the situation is that Brannstrom hasn’t asked for a trade at this point. And I don’t think the Senators are actively shopping him either. But if I had to guess, I think either Brannstrom will be playing with the Senators at the NHL level after the trade deadline or he’s going to be traded. This is the final season where he’s waiver-exempt, meaning they can’t go down this road with him again next season.

In other Senators’ news, the team canceled practice as a precaution measure on Monday, one day after a player and a coach entered COVID-19 protocols. The Senators have placed forwards Connor Brown and Dylan Gambrell in the NHL’s COVID-19 protocol.

Interim head coach Derek King will remain with the Chicago Blackhawks in that role for the remainder of this season. Prior to Sunday’s Blackhawks game, interim GM Kyle Davidson stated that the team will not look for a new coach until the offseason is underway.

Among the names the team might be considering: John Tortorella, Rick Tocchet, and Claude Julien.

Still No Progress Between Predators and Forsberg

According to Filip Forsberg’s agent, J.P. Barry, there have been no discussions on a possible contract extension. As Adam Vingan of The Athletic points out, Forsberg is in the final year of his deal and has said he’s willing to play out the season and talk to the club afterward.

Vingan writes the Predators might be concerned about Forsberg’s tendency to get injured. He explains:

There is never a good time to get injured, but the timing could not be worse for Forsberg, who chose to bet on himself in a contract year. Predators general manager David Poile, who has stated his desire to re-sign Forsberg, must tread carefully in negotiations. An argument could be made that Poile should prioritize trading Forsberg instead.

source – ‘Is re-signing Filip Forsberg worth the risk? Has Matt Duchene turned a corner? Predators mailbag’ – Adam Vingan – The Athletic – 11/06/2021