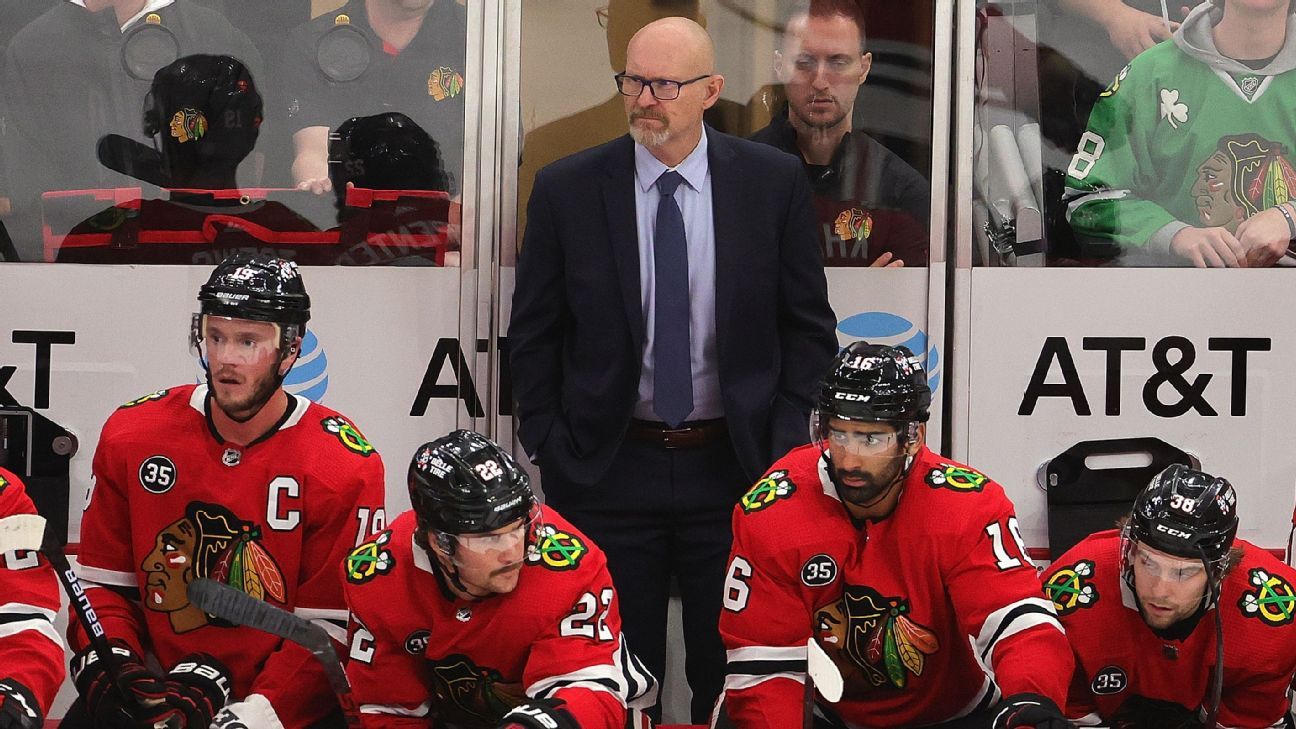 CHICAGO — Alex DeBrincat scored 37 seconds into overtime to give the Chicago Blackhawks a 2-1 win over the Nashville Predators on Sunday night in Derek King’s NHL coaching debut.

DeBrincat finished a 2-on-1 break and give-and-go with Patrick Kane to lift the Blackhawks to just their second win. DeBrincat got a return pass from Kane and popped his seventh goal past Juuse Saros from the left side of the net.

After scoring, DeBrincat scooped the puck from the back of the net and presented it to King in the dressing room. The 54-year-old King was promoted from the Blackhawks top minor league club, Rockford of the AHL, to Chicago’s interim coach after Jeremy Colliton was fired on Saturday following a 1-9-2 start.

King started his postgame news conference by saying,” “I’m not going to take my mask off because I’m smiling too much. Got to be humble.”

But then King removed his mask and confessed he wasn’t as nervous as he thought he might be in his NHL coaching debut.

“The message was just play the game right and don’t cheat it,” King said. “Stay lose and let’s have fun with this.”

The Blackhawks responded with one of their most competitive games of the season after a 5-1 loss at Winnipeg on Friday that seem to seal Colliton’s fate.

“I thought they battled,” King said. “It wasn’t always pretty, but they found a way to get the job done. I was really proud of these guys.”

King had been the head coach at Rockford since 2018 following a productive 14-year NHL playing career that included 261 goals and 612 points with four teams. Kane said he looked up his new coach’s stats on Hockey DB.

“He obviously was an effective player,” Kane said. “When you see that and know that he played in the NHL for a long time, I think that respect comes right away.”

Chicago’s Brandon Hagel and Nashville’s Alexandre Carrier scored 1:50 apart in the second period for the only goals in regulation. Hagel left midway through the third period holding his left arm, but King didn’t have a medical report immediately after the game

Saros finished with 30 saves as Nashville earned a point against Chicago for the 11th straight game (8-0-3). The Predators were 7-0-1 vs. the Blackhawks last season.

Coach John Hynes wasn’t dissatisfied after his team had traveled after a 3-2 win on Vancouver on Friday. The Predators are 5-1-1 in their last seven games after a 1-4-1 start.

“It was a gutsy, gritty effort,” Hynes said. “I thought Chicago played well, which we knew was going to happen. I’m proud of the way we worked and we found a way to get a point. The gumption within the group is strong.”

The Blackhawks’ coaching change is the latest chapter in a rough stretch for the franchise. The team published a report on Oct. 26 that showed senior leaders with the organization largely ignored allegations that assistant coach Brad Aldrich sexually assaulted former first-round pick Kyle Beach during Chicago’s run to the Stanley Cup title in 2010.

Stan Bowman, the Blackhawks’ general manager and president of hockey operations, resigned in the wake of the independent review, and Al MacIsaac, another top hockey executive, also departed. The NHL fined the Blackhawks $2 million.

The coaching switch was the first major move for interim GM Kyle Davidson, who was elevated when Bowman stepped aside.

Hagel opened the scoring at 7:15 of the second after scrapping his way to the right side of the net. He knocked he puck past Saros’ glove after Seth Jones shot from the blue line sailed wide and rebounded off the back boards.

Carrier tied it 1-all with his first goal of the season at 9:05 after slipping free from coverage by defenseman Calvin de Haan. Carrier skated from the right side of the net and across the crease, then stuffed a shot under Lankinen.

Both teams had prime chances in the scoreless third.

“I thought both goaltenders made some big saves at big times,” Hynes said.

Davidson said the search for a permanent head coach wouldn’t start until after the season, and didn’t rule out King for the position.

Marc Crawford was among the assistant coaches retained after Colliton’s departure. Crawford, 60, has been an NHL head coach over parts of 16 seasons with five teams.

Davidson said Crawford wasn’t in the running for the head coaching spot with Chicago because Davidson wanted a fresher perspective and Crawford had been “entrenched” in Colliton’s staff.

“He had it all set up for me,” King said. “It made my day a lot easer, less stressful.”