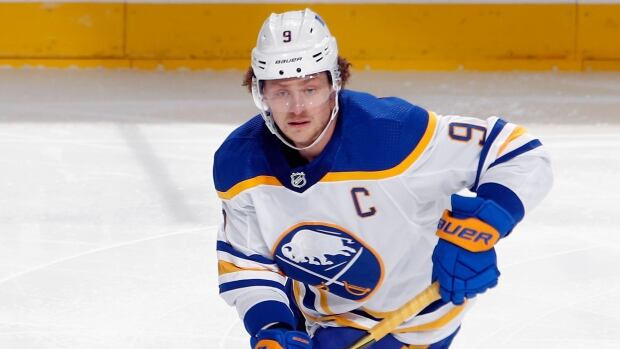 The Jack Eichel era in Buffalo is over, with a nasty public eight-month feud reaching a conclusion on Thursday when the Sabres traded their former captain and face of the franchise to the Vegas Golden Knights.

The trade ends a stalemate between Eichel and Buffalo over how to repair his herniated disk, which has sidelined him since March. The dispute revolved around the NHL’s collective bargaining agreement giving teams the final say over the treatment of injuries.

Eichel is expected to have the disk replacement surgery he preferred, though the recovery timetable means he’ll likely miss most if not all of the remainder of the season. The length of the dispute also essentially eliminates Eichel’s chance to represent the United States at the Winter Olympics, which will be held in Beijing in February.

Sabres doctors favoured Eichel having fusion surgery and opposed the disk replacement procedure because it has never been conducted on an NHL player.

Eichel was the Sabres’ highest-paid player and is in the fourth year of an eight-year, $80 million contract. He topped 20 goals in each of his first five seasons and enjoyed a breakout year in 2019-20, when he had a career-best 36 goals in 68 games before the season was abruptly cancelled due to the coronavirus pandemic.

Overall, he finishes with 139 goals and 355 points in 375 career games with Buffalo.

Buffalo acquired a top-10 protected first-round pick in the 2022 draft and a 2023 second-round selection. Vegas also acquired a 2023 third-round pick.

The feud became public in May, when Eichel revealed what he called “a disconnect” with the team over treating the injury, and he questioned his future with a franchise that once regarded him as a key building block after selecting him with the No. 2 pick in the 2015 draft.

The dispute escalated over the summer, with Eichel changing agents in August in a bid to spur a trade. In September, the Sabres stripped Eichel of his captaincy before the start of training camp.

In recent weeks, Eichel’s camp began threatening to file a grievance through the NHL Players’ Association, questioning whether Sabres doctors followed the collective bargaining agreement in giving his option of surgery serious consideration.

The standoff drew the attention of the highest levels of the league, with NHL commissioner Gary Bettman calling it “a terrible situation,” without fixing blame on either side.