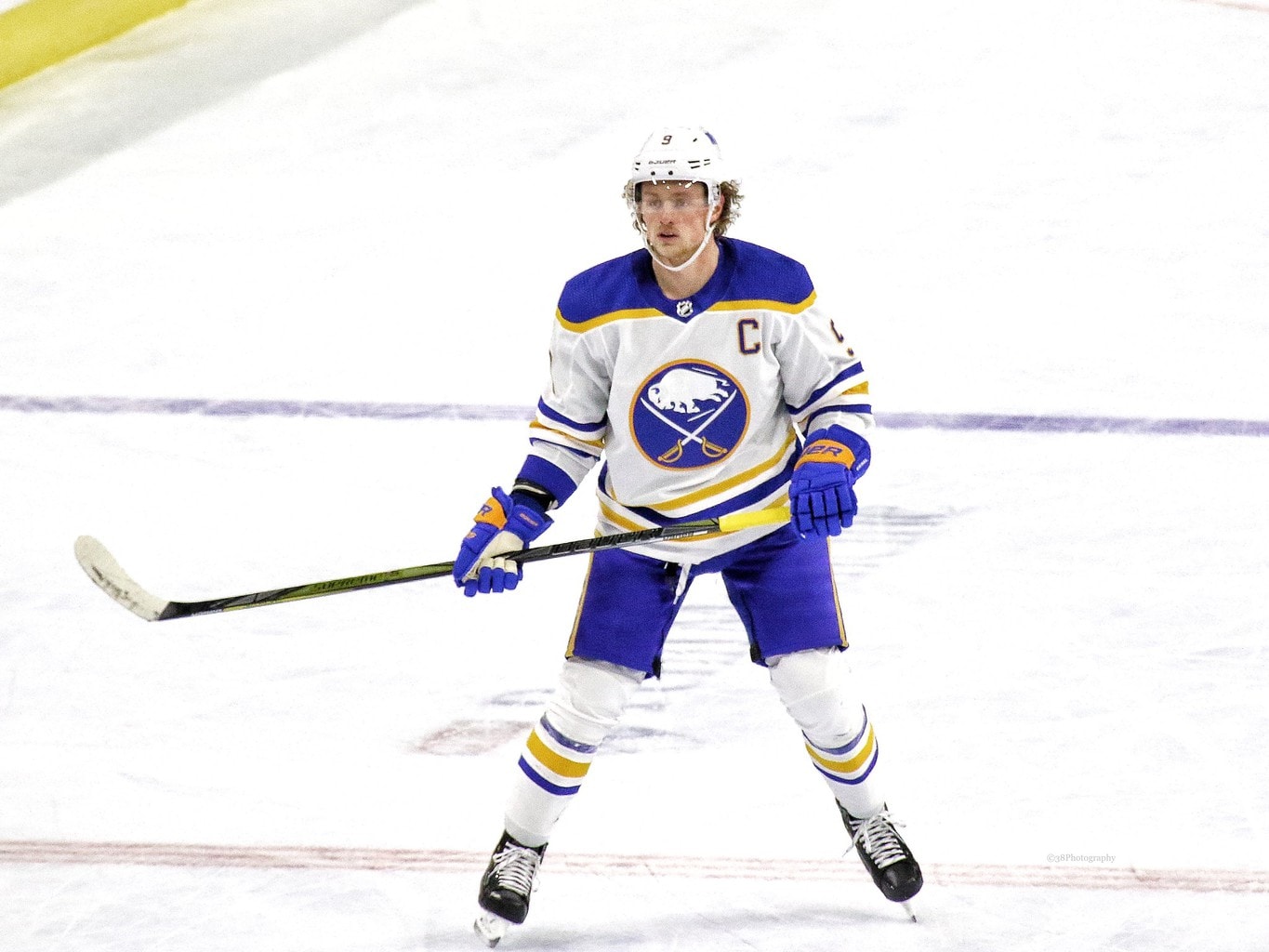 It is hard to believe, but we are now in the month of November, and the Buffalo Sabres have still yet to trade Jack Eichel. (from ‘Mike Harrington: On Jack Eichel front, lots happening and nothing happening,’ The Buffalo News 11/01/21). The 25-year-old has yet to get the surgery on his neck he needs to have done to continue playing and won’t get the procedure until he is traded to a new team.

One team that had been talked about as a possible destination for Eichel was the Calgary Flames. It made sense throughout the summer, as many believed the franchise needed to head in a different direction after a disappointing 2020-21 season. According to many, Flames general manager Brad Treliving did inquire about the Sabres star forward but ultimately decided not to pull the trigger on a deal.

What an Eichel Trade Would Take

In an article published Monday by Hailey Salvian of The Athletic, she talked about the possibility of the Flames making a move for Eichel. She mentioned that her untouchables would be Matthew Tkachuk and Andrew Mangiapane. At the same time, Johnny Gaudreau would be unlikely given the fact he is a pending unrestricted free agent. (from ‘Hailey Salvian: Flames mailbag: What assets would you trade for Jack Eichel? Can the Flames keep Gaudreau, Mangiapane and Tkachuk next season?’, The Athletic 11/01/21).

Instead, the assets she mentions that she would include in a deal are Matthew Coronato, Connor Zary, Jakob Pelletier, Dillon Dube, and Juuso Valimaki, while also mentioning they could consist of future first-round draft selections.

Not the Right Time

In my opinion, acquiring Eichel was a deal that made a ton of sense during the offseason. Now? Not so much. After dropping their first two games to start the 2021-22 season, the Flames have won six straight and sit just one point shy of the Edmonton Oilers for the top spot in the Pacific Division. It’s still early, but they appear to have turned things around from their off 2020-21 season, and Treliving would be unwise to make any drastic changes while they are on this current run.

The issue that happens in an Eichel trade is that the Sabres would need to take a contract back to make this deal work for the Flames cap-wise. As Salvian mentions, both Mangiapane and Tkachuk need to be untouchables, and trading Gaudreau who is leading this team with 11 points on the season, would send a very bad message to his team, who have gotten off to a fantastic start.

If Eichel were healthy and ready to go, then trying to bring in Eichel right now would be a no-brainer. However, it isn’t that easy. As mentioned above, he is still waiting on neck surgery before he can begin playing. The operation he wants to be done is expected to leave him sidelined for roughly 6-12 weeks, according to Dr. Chad Prusmack, who spoke with Elliotte Friedman on the “32 Thoughts’” formerly known as “31 Thoughts” podcast this summer.

If Treliving is somehow able to figure out a deal that involves keeping the main core of his team intact, then he should pursue that. Both Sean Monahan and Milan Lucic are players on big deals who the Flames would likely still continue to have success without, but even then, moving just one of them wouldn’t free up enough cap space to acquire Eichel, as the Sabres have said they will not be retaining salary in the deal.

Perhaps they budge on that, but if not, the Flames would have to include more on top of just Monahan or Lucic, perhaps Dillon Dube and Juuso Valimaki. Again, however, that raises the problem of thinning out your roster for a guy who can’t play for months. Factor that in with a few of the top prospects they would need to include to get this deal done, and it does not make sense for this club right now, given the way they started. Perhaps if he still hasn’t been dealt later in the season and the Flames happen to drop in the standings, it is something you reconsider. For now, however, a deal between these two teams doesn’t make sense.