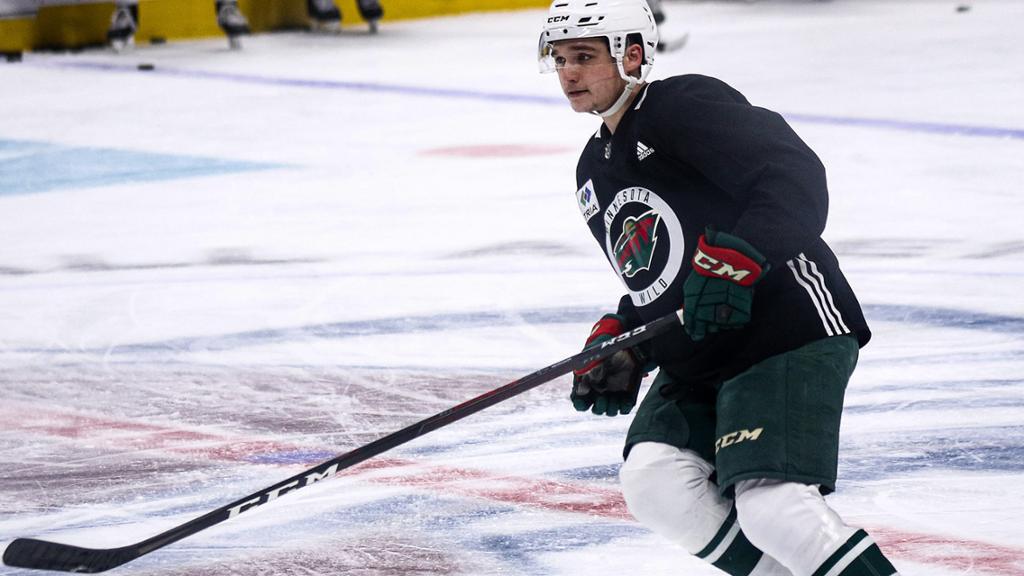 When the Wild decided to send Adam Beckman and Calen Addison to Iowa of the American Hockey League at the end of training camp, it wasn’t with the expectation that either would be down there the entire year.

Both players had strong camps and pushed for roster spots in Minnesota, missing out – in the case of Beckman specifically – by a very narrow margin.

But lo and behold, with the season reaching the two-week mark on Friday night, both Beckman and Addison arrived in Denver from Fargo, where they were re-routed off a bus trip from Des Moines to Winnipeg, to play Saturday night at Ball Arena against the Avalanche.

And as difficult as the news may have been a few weeks ago, the goal for each now is simple: play as well as you can now to either force a difficult decision down the road, or put yourself in line for another call up to the show.

“I just try to be who I am and try not to change too much, I think that’s my focus,” Beckman said. “Just to be myself and be the player that I always am, that’s my energy level and my play as well.”

Video: Beckman ahead of his NHL debut

For Addison, the journey back to Minnesota marks a return to the big club after he played three games in the NHL during the regular season last year, and three more in the team’s playoff series against Vegas.

That experience has made him more comfortable this time around.

“It just feels good to be back,” Addison said. “This is an awesome group and a great staff. It’s always very welcoming and makes it an easy transition from Iowa to here.

“And having that experience from last year, I think I’m just a little bit less nervous and I’m just going to go have fun with it.”

Evason said Saturday morning that the performance of both Beckman and Calen Addison in training camp played a part in their call up to the big club.

The most important thing, of course, is current performance, and according to coaches down in Iowa, Connor Dewar‘s first four games in the AHL this season earned him the first recall. He made his NHL debut in Seattle on Thursday, just down the road from where he played his junior hockey in Everett.

But Beckman and Addison weren’t far behind.

“The first is, are they playing well now?” Evason said. “Yeah, for sure we remember how they conducted themselves through training camp and both guys did. That’s why they’re here.”

Addison and Beckman had an interesting journey to Colorado. Iowa drove from Des Moines to Fargo to break up the bus ride north and practiced Friday afternoon. With word of roster moves coming, but no inclination at the moment of who it might be, the team went to a mall in Fargo to kill some time before hitting the road.

Had they crossed the border into Canada, it would have been markedly more difficult to try and get them back into the U.S. in time for Saturday night’s game.

Addison said he didn’t buy anything cool, “just had a coffee,” during his wait. After receiving the news from Iowa coach Tim Army, the two boarded a flight to the Mile High City and arrived Friday night, well in advance of morning skate and the game on Saturday.

Iowa got back on the bus and continued north to Winnipeg, where it played a matinee against the Manitoba Moose on Saturday afternoon at Canada Life Centre.

Addison and Beckman each hope to make their stops with Minnesota more than just a cup of coffee, but even if they don’t, the opportunity to prove what they are capable of at this level is one they hope to not let pass by.

“Everyone has to come in and earn their job every day,” Addison said. “Things change. You just come in and do your best every day and that’s all you can do. I’m just happy to be here, and whenever the opportunity is there, I’m gonna make the most of it.”