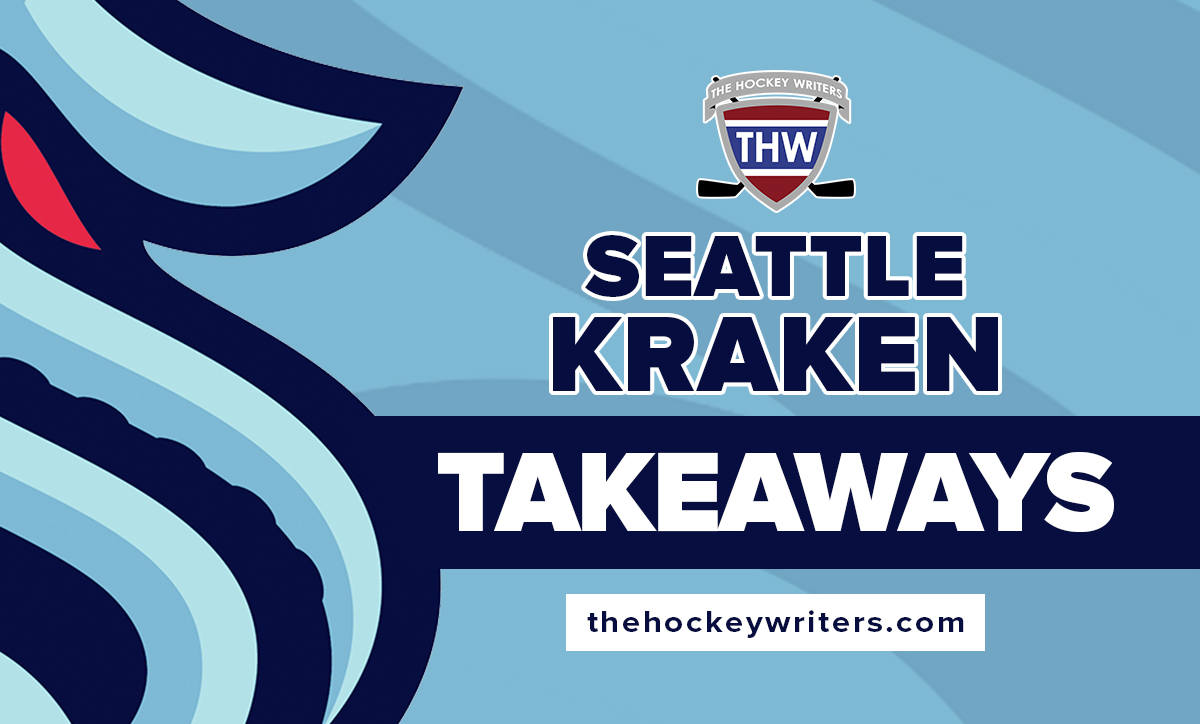 As the eighth Seattle Kraken game of the 2021-22 season has come and gone, the question is, “who are these Kraken, and where were they the first six games of the season?” The Kraken handed the Minnesota Wild their first road loss of the season, 4-1.

Two of those goals were empty-net goals, but they don’t ask how, they ask how many. Here are three takeaways, the second of which may become a “3 Takeaways” theme this season.

Kraken Are Getting off to Better Starts

The Kraken started the season with a bad habit. In four of their first five games, they gave up the opening goal less than 10 minutes into the game and were 1-3-1. Many would assume that poor defensive play would be falling on the defense’s shoulders. However, much of it landed on the forwards.

In most cases, you can’t score without shooting the puck. The Kraken has finally started to bring the offense off the hop. They outshot the Wild 13-10 in the first period and rifled off 11 shots to the Montreal Canadiens’ nine in their previous game, their first home win.

Haydn Fleury, more on him later, scored his first of two goals in the first period on four shots. His four shots were more than any other skater in an individual period.

This is what the Kraken need. If they’re going to settle into a defensive shutdown when ahead late in games, they have to hit the ground running from the start. While one may suspect the forwards will lead that department, don’t sleep on players like Fleury and Vince Dunn to contribute nicely from the blue line.

The Kraken Will Sink or Swim by Philipp Grubauer

The “Gruuuuuu” chants were endless at Climate Pledge Arena, and with good reason. Grubauer saw 31 shots and stopped 30, including 16 in the third period. Those 16 shots doubled the Kraken’s total that period, and he stood on his head.

He faced five shots on the penalty kill, and two on the power play, stopping all seven. The Kraken had 10 blocks, with four of them coming in that third period. It’s still early, but he is making the necessary saves that he was missing in the earlier parts of the season.

The way the Kraken was put together, it was expected that they’d be playing many close games; 3-1, 2-1, 4-2. They don’t necessarily have the firepower to be blowing out teams or putting up four-plus goals per game, such as the St. Louis Blues or Edmonton Oilers. This team’s success will be through the defense and Grubauer.

This was a 2-1 hockey game until the Wild pulled Cam Talbot, and Grubauer stole the show. There’s going to need to be a lot of that for the reigning-Vezina nominee. In the three Kraken wins this season, he has given up five goals and has a .942 save percentage.

It appears the team is figuring themselves out, slowly but surely. Grubauer looks to be gaining and building on the confidence and momentum generated from beating the Canadiens. He could find himself taking the Kraken on a nice little swim to get them over .500.

Being a defensively drafted team, it seems like we’ll be saying that a lot this season, the Kraken should have a strong penalty kill (PK). Despite some lineup changes, the THW Kraken team projected several players to be big parts of the PK units, and they’re off to a good start.

The Kraken is sixth in the NHL with an 88.9 penalty kill percentage. Players like Jamie Oleksiak, Joonas Donskoi and Riley Sheahan have been leading the charge. Jeremy Lauzon, who some didn’t even have pegged for a starting spot, tied with Adam Larsson for the team-lead with 2:18 shorthanded time on ice against the Wild.

Penalties are going to happen. It’s a good sign for the Kraken to have a competent penalty kill right from the get-go. While they’ve scored nine goals over their past two games, albeit two empty netters, they still average just 2.75 goals per game, which is less than they allow. A strong penalty kill may end up being what wins them games down the line, so it’s promising to see it clicking so early in the season.

Three Kraken have earned themselves shoutouts. One of them was Grubauer, who had a whole section dedicated to his performance. These other two saw themselves on the scoresheet… thanks to each other.

Ryan Donato was a healthy scratch in the home opener. He came back into the lineup against the Canadiens and scored a highlight-reel goal. He followed that up tonight with an assist on Fleury’s game-winning goal, three shots, a hit, and a takeaway in 11:25 time on ice, including over three minutes on the power play.

Fleury became the first defenseman in Kraken history to have a multi-goal game and has only played in five of eight games thus far. He did it while playing the least of any defenseman, just 14:11 time on ice with 49-seconds on the penalty kill. His stat-line also accounted for six shots, which led all defensemen. He displayed some physicality to go with his finesse as he threw three hits and blocked two shots.

Tricks or Treats Against the New York Rangers

Boo! It’s the New York Rangers heading cross-country to take on the Kraken on Halloween. Which version is the Kraken, and Kraken faithful, going to see? The team whose offensive weapons, such as Artemi Panarin and 2021 Norris winner Adam Fox, are popping off, or a team that can’t get out of their own way?

The Kraken need to look to build on their recent first-period successes. Come out of the gates hard and quick, and if they falter, bounce back. The first 20 minutes will be key against a Rangers team that, despite losing Ryan Reaves to injury, will bring a lot of physicality.

Sean Raggio lives for hockey. He will be covering the Seattle Kraken, and is a co-host of “What’s Kraken” for THW. Sean gained experience in writing for television, print and radio while studying journalism at Quinnipiac University and being an active member in the student media organizations there. If you have any questions or comments, feel free to reach out on Twitter! A link can be found at the bottom of his articles, such as this one.

What you need to know ahead of the restaged 2022 World Junior Championships
3 Most Probable Teams to Sign P.K. Subban
Blackhawks Should Target These 4 Dallas Stars in Kane Trade
Oilers re-sign Benson
San Jose Sharks 2022-23 Season Preview