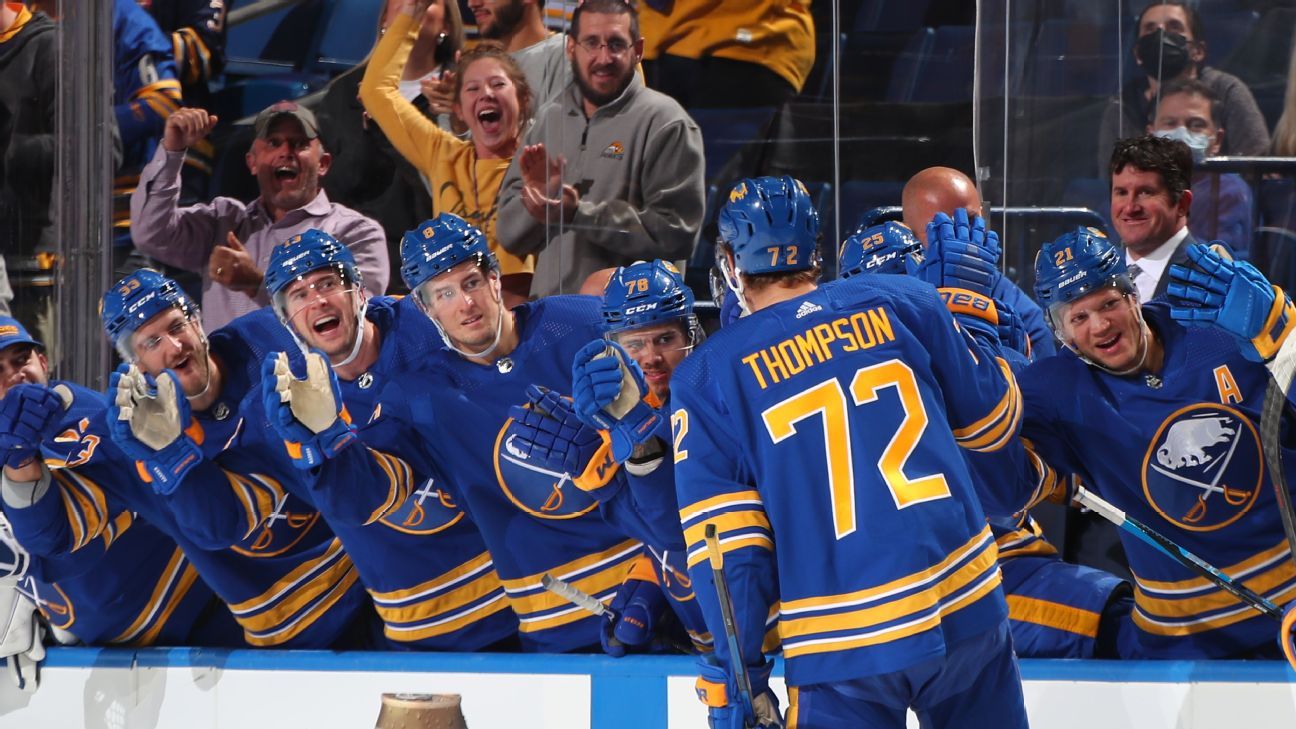 The only certain thing about the first month of the NHL season is uncertainty.

A few leaguewide trends early on, via Covers:

But what about some team-specific trends? Here are a few that might continue on past the murky start, and a few that may be only a mirage.

Tampa Bay Lightning (0-5-0 against the spread): The Lightning have been a real oddity to start the season. Consider that through five games, they’ve never held a lead in regulation. Consider that they haven’t scored a goal in the first period, while every other team this season has at least one goal in every period. The Lightning were 36-42 ATS last season. Their expected goals percentage (53.19) is down from last season, but it’s their power play (16.7) that’s been way off. They’re 2-2-1 to start the season and will miss Nikita Kucherov for an unspecified amount of time. Yet, one assumes they’ll continue to be a favorite in most contests.

St. Louis Blues (4-0-0 ATS): That the Blues are averaging 2.75 goals against per game isn’t all that surprising. After all, they averaged 2.81 goals against over the previous two seasons. But “the St. Louis Blues” and “offensive juggernaut” are usually diametrically opposed. They’re averaging 5.50 goals per game through four games, with an average margin of victory of 2.75 goals. They were 59-79 over the last two seasons combined against the spread.

New York Rangers (0-5-1 over/under): Three teams had yet to hit the over through Saturday’s games. Those teams were the Dallas Stars (to be expected), the Ottawa Senators (ditto) and the Rangers. The Rangers are a top-five defensive team (2.17 GAA) with the best goalie in the regular season thus far in Igor Shesterkin (.953, 1.47 GAA). They haven’t exactly been a goal-scoring force yet, though. Their 2.33 goals per game ranks 25th, and they’re 29th in expected goals per 60 minutes at 5-on-5 (1.87). The Rangers were 21-31-3 against the total last season. They should be a stouter defensive team under new coach Gerard Gallant. Get in before the totals start reflecting that prowess.

Edmonton Oilers (1st period ML, 4-0-1): The Oilers have been ready off the hop this season. Edmonton has outscored teams 8-3 in the first period, going 4-1 on the puck line. They started strong last season too, with a plus-8 goal differential in the first period. The eights so far are to be expected, but I’m not sure I trust their defense and goaltending to hold this trend, as a middle-of-the-pack team in even-strength expected goals against.

Rob Pizzola is a professional sports bettor by trade now. He left The Score, a Canadian sports media outlet, about five years ago to pursue a career wagering on daily fantasy sports. That eventually led to his going full-time into sports betting. He’s also co-owner of betstamp, which is a line shopping tool that tracks odds across a multitude of books. “It’s the easiest way for even a recreational bettor to get an edge. If they’re going to lose, they lose less. If they’re going to win, they win more,” he said.

We pestered Pizzola with a few questions about hockey wagering:

ESPN: In the great chicken-or-the-egg debate, what comes first: the inkling that you want to wager on a game or the line speaking to you?

Pizzola: I always tell people to come up with their own line on a game before they even look at what the sportsbook is offering. Oftentimes, people get infatuated with betting a certain side, and then they blindly bet that. My advice is to create your own number on a game, then go out and find the best prices on both sides, and then determine which side you’re going to bet. There’s an example I use. … If you go to the grocery store and you saw five of the same bags of chips, and four were priced the same and one was cheaper, you’d always take the one that’s cheaper, because it’s the exact same bag. For some reason, this hasn’t made its way into the recreational betting space yet. People aren’t price-sensitive enough.

Q: But if I see that cheaper bag of chips, I just assume something happened to it — like it got stepped on or something.

Pizzola: Very possible. It’s not the perfect example. Maybe I should use gas stations instead. But in this case, you’re getting the same bet, regardless.

Q: How long into the season do you have to go before you have a handle on trends?

A: I’d say 20 games in for each team. Look at the Sabres this year. In past years, they always start out of the gate and they’re flying, and then they crap the bed after that. Hockey’s a random sport and the average fan probably doesn’t give it that much credit for being as random as it is. It’s a high-variance sport. For five or 10 games, anything can happen. But as we get more games, we can tell with some certainty what these teams are.

Q: Finish this sentence: When I bet on hockey, the identity of the starting goalie is _______.

A: When I bet most of my games, the identity of the starting goalie is “unknown.” I’m a big believer in beating the market, and the concept of closing-line value. I want to bet at a better price than what the market closes out. A lot of that is risk taking. Sometimes you’re going to get bad news. Sometimes it’s going to work in your favor. Over time it balances out. Some people tend to wait and get as much information about that game as they can but, by waiting, you risk losing the price on that game.

A: All the sportsbooks look the same right now. Same format. I think there’s an opportunity in the market for someone to come in and present sports betting in a completely different capacity. There’s a barrier to entry if you don’t know what the odds mean. I think there’s some way to appeal to a younger crowd and make it a lot more fun for people that find it overwhelming.

Co-hosted by Joe Fortenbaugh and Tyler Fulghum, Bet is available for live and on-demand viewing on the ESPN App and on ESPN’s social media feeds on YouTube, Facebook and Twitter. Watch

The Seattle Kraken made their home debut on Saturday night and retired the No. 32, symbolic of being the 32nd team in the league and for the 32,000 season-ticket depositors they had in order to justify the expansion bid.

They may want to retire another number while they’re at it: 90.5.

That was the standings point total for the team at the start of the season. Most projections by the hockey analytics community had them beating that total. Their 1-4-1 start hasn’t inspired much confidence they’ll clear the mark. It’s possible that last summer’s point total projections (Draft Kings at 87.5) might have been more in line for their inaugural season, before they were bet to the moon.

Please note that Micah Blake McCurdy still has them clearing 91 points while Dom Luszczyszyn has them coming in at 90 points. They’re +1500 to win the Pacific Division. The biggest mover there? The Sharks, whose undefeated start has them at +1300 behind the Oilers (+125) and Golden Knights (+150).

Oilers star Connor McDavid has started the season with 2.60 points per game, with six goals and seven assists in five games. That projects to 213 points this season — or just two points off of Wayne Gretzky’s single-season record of 215 points set in 1985-86. All due respect to Alex Ovechkin‘s pursuit of Gretzky, but that’s one Great One’s record we never thought we’d ever see threatened.

His dominance extends to the world of player props. He’s started the season 5-0 against the points prop, which is usually 1.5 points. The prices have been pretty good, too, topping out most games at around -130. He’s scored goals in 3 of 5 games and had assists in four of those five, including two-plus in three of them. We’re “ride or die” with Connor on player props. Well, save for shots on goal, where he’s had two or fewer in three out of five games despite leading the Oilers with 21 shots.

For more NHL betting coverage, check out “Daily Wager” on ESPN2 and ESPN+. If there’s anything you’d like to see featured in the next edition of the column, or have any suggestions on future topics, email greg.wyshynski@espn.com.