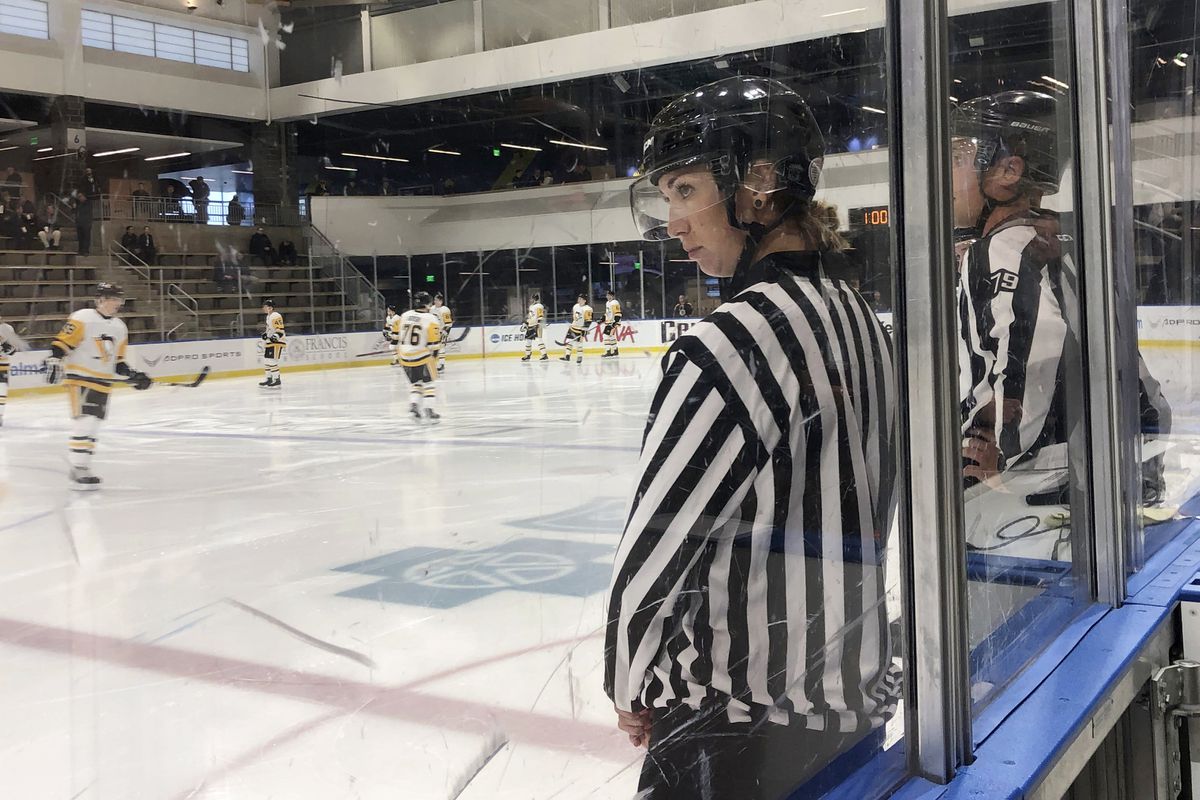 After her four-year college hockey career at Brown University, Katie Guay became a referee in 2006 as a fun part-time job to help cover gas money for her long drives to a rink where she was playing in a rec league.

Some 15 years later, she’s about to make significant hockey history with her whistle.

Guay has officiated everything in women’s hockey from the Frozen Four to the 2018 Pyeongchang Olympics. She blazed a trail by officiating men’s games in NCAA Division I hockey, the Southern Professional Hockey League, and at an NHL prospects tournament.

This weekend, the 39-year-old from Westfield, Mass., will become the first woman to referee a game in the AHL, the primary development league for the NHL. Guay will be the first of 10 female officials (seven referees and three linesmen) slated to break the AHL’s gender barrier this season.

“My one goal had always been the Olympics so I thought I had already reached the pinnacle for my officiating, but then this new opportunity opened up to continue the journey,” said Guay, who will referee the Lehigh Valley Phantoms at the Wilkes-Barre/Scranton Penguins game on Saturday night. “It’s an adrenaline rush being out on the ice skating as an official, just like it is for a player. It takes time to build your credibility within a new league and to earn the respect of the players and coaches as you get more games under your belt.”

Every referee, and 97 per cent of linesmen, on the 2021-22 NHL officiating staff worked in the AHL at some point, getting used to the speed and nuance of the game. Having these 10 women working in the AHL is another step toward the possibility of female officials in the NHL, much like the NFL and NBA already have.

The NHL, AHL and other leagues, such as the CHL, are unearthing and developing female talent in the profession.

“The game has become more welcoming to women. I think it’s vital for the growth and sustainability of hockey to ensure that there are lots of opportunities for any great athletes to stay in the game who love that physical and mental challenge of being on the ice,” said Stephen Walkom, the NHL’s director of officiating. “If we don’t get a certain percentage of those people playing hockey today to fall back into officiating – men and women – then our officiating will suffer.”

A day after Guay’s debut, referee Kelly Cooke will call her first game in the AHL – the Rochester Americans at the Utica Comets. The 30-year-old from Andover, Mass., has been officiating hockey games since she was 12.

The former Princeton hockey player has worked the best women’s games, from the world championship to Division I college hockey. In 2019 she teamed with Guay on the first all-female officiating crew at the NCAA Women’s Frozen Four. She also played a couple of pro seasons for the Boston Pride of the National Women’s Hockey League (now renamed the Premier Hockey Federation).

As with Guay, and most others among the 10 females chosen by the AHL, Cooke had also proved her mettle alongside males and females when invited to the NHL exposure combine for prospective officials, held annually in Buffalo. Thirty women have participated in the event through 2021.

There, league evaluators measured their stamina and speed, skating forward and backward and observed their poise, game knowledge and decision-making ability. Off the ice, they went through elaborate fitness testing from jumps to pushups, situps and the yo-yo test – running between markers at increasing speeds to evaluate their maximum aerobic endurance. Officiating supervisors for several men’s pro leagues were there watching.

Both took part in a virtual mentorship program for 48 elite female officials identified with help from Hockey Canada and USA Hockey. Started in December, 2020, current and retired NHL officials met weekly with the women on Zoom to study game video, talk shop and network.

As with some of the other women, Cooke was also invited to officiate at an NHL prospects tournament, where players ages 18 to 22 competed for NHL jobs.

“The prospect camp was the first time that I’d done hockey at that level with guys of that size so it was definitely eye-opening in the first five or 10 minutes but then you settle in it, and it’s still hockey,” said Cooke, adding that at 5-foot-1, she is often more than a foot shorter than men she’s officiating. “If you’re confident in your calls and you know what’s going on, you command the respect of players and the coaches, then your job is a lot easier. You can’t shrink away or second-guess yourself.”

Cooke was thrilled – and a little surprised – to receive the AHL’s e-mail asking her to report to the league’s preseason referee’s camp in Springfield, Mass. She can’t predict how many AHL games she will get this year, but she’ll balance it with women’s college games, plus an IIHF event in November that will decide the officials who will work women’s hockey at the 2022 Beijing Winter Olympics. Cooke, who is also a lawyer, will juggle it all with her job as a corporate associate at a Boston law firm.

The backgrounds and officiating experiences of these 10 women are varied.

Alex Clarke, a linesman from Weyburn, Sask., has always worked at a mix of male and female hockey games, even from her youngest days a teenaged referee. After playing NCAA Division III hockey at the College of St. Scholastica, in Duluth, Minn., she returned home and worked more than 300 games in Triple A and Saskatchewan Junior Hockey. The 28-year-old worked the 2021 women’s world hockey championship in Calgary.

In addition to her AHL games this year, the WHL has also hired Clarke as its first female linesman. She, too, hopes to land a spot working women’s Olympic hockey in Beijing in February. She’ll use vacation time from her job as an agriculture lender for Farm Credit Canada. She and her husband also have a two-year-old daughter.

“Being a hockey official is not necessarily a desirable profession or one kids dream of. Most people who are passionate about hockey are passionate about playing, not refereeing,” Clarke said. “But there are more and more females reaching higher levels in officiating, so we come back and we promote that. I feel really supported, but it’s also a little overwhelming, too, all the attention it gets to be the first.”

Dan Hanoomansingh, Hockey Canada’s Manager of officiating, says lower-level leagues – such as Junior A and Junior B – are seeing more female officials progressing through the ranks because of provinces and clubs investing in their mentoring. He says there will continue to be a quality group of female hockey officials in the pipeline, and that the presence of these 10 women in the AHL can have an impact on the females coming behind them, especially if they share their knowledge.

“It’s good to see that many of them at that level because it shows the doors really open. It’s not just one who has made it to this level, but they’ve got the strength of a group,” Hanoomansingh said. “The CHL and the AHL, these are businesses. And as much as they’d like to have an inclusion of women in their league at the end of the day if they couldn’t do the job, they wouldn’t be provided with this opportunity.”

There is one other Canadian woman, referee Elizabeth Mantha, 31, who played for University of Montreal and the Montreal Stars of the former Canadian Women’s Hockey League. The native of Longueuil, Que., has officiated at different levels in Canada, including the Triple A Quebec Junior Hockey League, the CWHL and the women’s worlds in Calgary.

The OHL also added its first female linesman this season – also from the 10 women being added by the AHL – 24-year-old Kirsten Welsh from Blackstock, Ont.

In 2019, Welsh graduated from Robert Morris University, near Pittsburgh, where she was captain of the women’s hockey team. She had never considered officiating after university until one of her coaches received a call from Walkom looking for strong skaters who might be interested in attending the NHL’s 2019 exposure combine for officials. Despite having no officiating experience, Welsh jumped at the opportunity.

In good shape from four years of college hockey, she performed well at the combine and showed she could be a quick learner.

“It was kind of like sink or swim out there on the ice,” Welsh said. “They wanted to see how people would handle themselves. A big part of officiating is confidence. Doors weren’t going to open up for me just because I was a woman who showed up. I had to perform there.”

Since then, she was invited to work at the 2020 NHL all-star game in St. Louis, where she worked on an all-female crew with Guay and Cooke for the women’s elite 3-on-3 game featuring stars from Team Canada and Team USA. Now she lives with her husband in Pittsburgh, works a sales job at ADP, and works as many games as she can get, from the OHL to the ECHL and men’s NCAA Division III.

Would a full-time career as an NHL official suit her someday?

“Oh my gosh yes,” Welsh said. “It’s what I want. I’m just really glad we’re taking it step by step and not rushing anyone into the NHL. It’s the best hockey league in the world and if they’re going to put a female official there, they want her to be ready, and at the best of her ability.”

NHL Rumors: Oilers, Ducks, Stars, Flames
Calgary Flames’ Top Regression Candidates for 2022-23
Canada awarded 2023 women’s hockey worlds, U.S. to host in ’24
Provincial federations demand answers from Hockey Canada ahead of payment deadline
4 Blues Who Will Be Under the Microscope for 2022-23