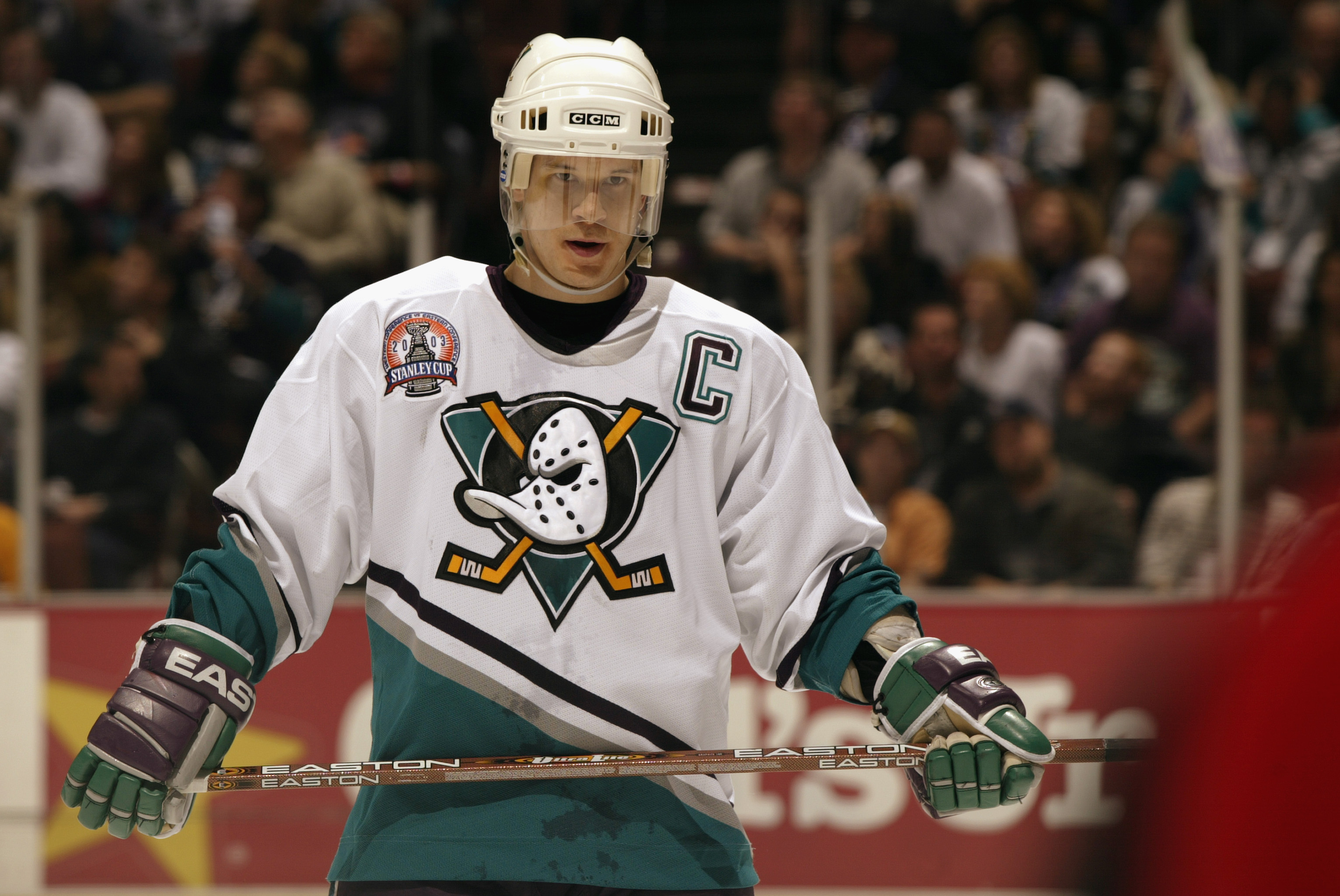 Paul Kariya was a young phenom, the face of a young franchise. He was given lofty expectations and broke into the league around the same time as two other comparable Hall of Fame players, Pavel Bure and Eric Lindros. He was a solid all-around player and a statesman for the sport of hockey.

His career was marred by concussions and without meaning to, he’s been connected with the awareness of concussions and post-concussion syndrome from hockey ever since his retirement.

The Rise of a Kariya

Before reaching the NHL, Kariya was on the fast track to becoming a star. The Vancouver, BC native played for the British Columbia Junior Hockey League’s (BCJHL) Penticton Panthers for two seasons, resulting in 244 points in just 95 games. He was named Rookie of the Year in the first year, and Most Sportsmanlike Player and BCJHL Most Valuable Player in both seasons. In the second season, he was named the RBC Canadian Junior Hockey Player of the Year.

At the college ranks, Kariya continued his rise as hockey’s next star. Playing for the University of Maine, the 5-foot-10 forward exploded for 100 points in 39 games. in his freshman year, winning everything possible. On top of helping his team to the NCAA Championship, he was named the Hobey Baker Award winner (becoming the first freshman to win the award), Rookie of the Year and MVP at the New England and Hockey East levels, and was on both First All-Star Teams. He was already a superstar leading up to his draft.

In 1993, Kariya helped Canada win gold at the World Junior Championships, where he had eight points in seven games. He was named a top-three player on the team. But he wasn’t done there. Later that year, he played for the men’s team, adding nine points in eight games.

Kariya and the Mighty Ducks

With the fourth-overall pick in the 1993 NHL Entry Draft, the Mighty Ducks of Anaheim selected Kariya. The selection put a stamp on the expansion franchise, making him their first-ever choice and set them up for future success. There was no mistake as to why Kariya was issued No. 9 and he made sure to live up to the number.

Kariya played nine seasons with the Mighty Ducks, serving as team captain in seven of them, he was the youngest captain in the league at age 21. During his rookie campaign, Kariya finished third in Calder Trophy voting at the end of the lockout-shortened season.

The 1995-96 season saw the start of Kariya’s dominance. The sharp-shooting winger earned his first of seven All-Star nods, tallying 50 goals, 58 helpers, and 108 points. In addition, Kariya also earned the Lady Byng Trophy. It just-so-happened that in the 1995-96 season, the Mighty Ducks added a player by the name of Teemu Selanne – creating one of the best duos the league has ever seen.

The two became intertwined. While they were stars apart, they were superstars together. Known as an “odd couple,” the two ended up becoming best friends.

“It’s 180 degrees, personality-wise,” said Kariya on him and Selanne, “But it’s funny, we’re a lot more alike in the way we think, and the way we perceive the world, than different. He’s a very outgoing personality, I’m a more quiet and private person, but we’ve gotten along since the first time we met and have been friends ever since.”

In 1996-97, Kariya helped Anaheim reach the postseason for the first time in franchise history. It was yet another star-studded season for him, finishing second in voting for the Hart Memorial Trophy, he also earned another Lady Byng Trophy and another All-Star appearance. Plus, Kariya notched a league-best ten game-winning goals and a league-high 340 shots on goal.

Kariya carried over the success of a 99-point season into the Stanley Cup playoffs. Across eleven postseason contests, he totalled 13 points. During Game 6 of the Western Conference Quarterfinals against the then-Phoenix Coyotes, he netted a 3-2 game-winner in overtime. Anaheim would take the series in seven.

After his time in California, the Mighty Mouse spent one season with the Colorado Avalanche and was joined by his partner Selanne. It’s rumoured that the two took less money in order to play there together. Kariya then spent two very productive seasons with the Nashville Predators, before playing his last three campaigns as a member and alternate captain of the St. Louis Blues.

While injuries, lockouts, and contract squabbles took away some opportunities from Kariya, he still managed to produce some big league numbers in the “dead puck era.” He finished his career as a point per game player. In 15 seasons, Kariya registered one 50-goal campaign, three seasons of 40 or more and seven seasons of 30 or more.

On his career ledger, Kariya netted 402 goals, dished out 587 assists, totalled 989 points, 139 power play goals, and 53 game-winning tallies – in 989 games. He was also named to the NHL First All-Star Team on three occasions.

Throughout his career, Kariya was a member of Team Canada on numerous occasions. After being drafted in 1993, the legendary player suited up in two Olympic Games and two World championships. He won a gold medal in each, and a silver medal in each.

He helped Canada to the World Championship silver medal in 1996 and was named to the All-Star Team again. In 2002, he won international hockey’s holy grail, an Olympic gold medal in Salt Lake City. He likely would have participated in the 1998 Olympics, which would have been particularly special for Kariya as a Canadian of Japanese descent, but he was held out due to a concussion.

Heart of a Champion

Kariya wasn’t a big guy by any stretch. Yet, he played with a big heart and toughness. Among his many team and individual accolades, the Stanley Cup eluded him.

The closest Kariya would come to winning a title was the 2002-03 season, when the Mighty Ducks won the Western Conference and pushed the New Jersey Devils to a Game 7 in the Stanley Cup Final. It was Kariya’s final season with Anaheim.

During that postseason run, Kariya notched 12 points in 21 games, including a triple-overtime game-winning goal in Game 1 of the Western Conference Quarterfinals in Detroit.

However, the play that has become engrained in hockey fan’s memories came during Game 6 of the Stanley Cup Final. Midway through the second period, Kariya was levelled by Devils defenseman and opposing captain Scott Stevens. Despite taking some time to get up and leaving the game, Kariya returned to the bench and the ice. Late in the same frame, he slapped home a howitzer past Martin Brodeur, putting the game essentially out of reach.

Unfortunately, Kariya’s concussion issues are largely how he’s remembered. In a time where concussions weren’t as watched for as they are today, he had six documented throughout his career – there were likely many more. Due to this, he announced his retirement in 2011.

That famous goal from Game 6 against the Devils is the most widely known concussion, except by Kariya himself. Speaking to TSN years after retiring, in 2017, the former star noted that he had no memory of the hit, returning to the game, or scoring arguably his most famous goal.

The decision to retire was a relatively easy one. Mark Lovell, one of the top concussion doctors in North America at the time, told the star that he had brain damage prior to the 2010-11 season and needed to call it a career. Kariya waited it out, sitting out the season to see if he improved, but eventually gave in.

It’s easy to look back at Kariya’s career, which spanned across two NHL lockouts and saw him miss significant time due to injuries, and wonder “what if.” But even with the time he has, he made his mark on the league and became a star. He even helped shape an organization, putting them on the map right away with his dominant play. For his remarkable play, he was inducted into the Hockey Hall of Fame in 2017.

While Kariya wasn’t named to the NHL’s 100 Greatest Players of All-Time list, the winger was a fan favourite not just to those who cheered for the Mighty Ducks, but all hockey fans. He was a true representative of the game and will forever remain the original Mighty Duck.

Starting out as an Ottawa Senators contributor for The Hockey Writers, Josh is now an editor and at-large contributor, focusing on prospects, the NHL Draft, hockey history, and breaking news stories.