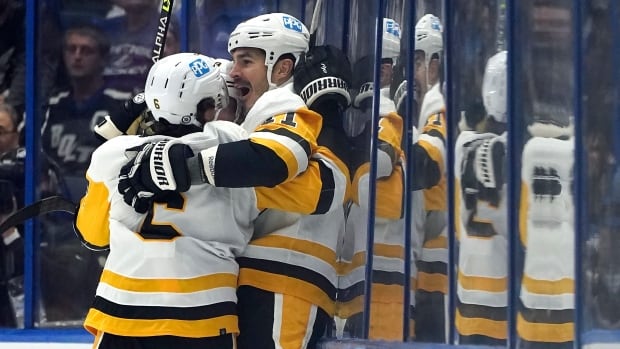 Dominik Simon, Teddy Blueger, Bryan Rust and Evan Rodrigues also scored, and Kris Letang had two assists for the Penguins, who played without injured stars Sidney Crosby and Evgeni Malkin. The final three Pittsburgh goals were into an empty net.

Before opening the 2021-2022 season at home, the Tampa Bay Lightning raise their 2021 Stanley Cup championship banner to the rafters of Amalie Arena. 2:20

Heinen and Boyle put the Penguins up 2-0 with goals in the first 4:11 of the second.

Jeff Carter stole Vasilevskiy’s clearing attempt behind the net and set up Heinen’s goal 12 seconds in. Boyle, who signed a $750,000 US, one-year contract before the game after coming to training camp on a tryout offer, scored from the low slot at 4:11. The 12-year veteran last played with Florida in 2019-20.

A new season is upon us, and Rob Pizzo gets you caught up on a very busy offseason. 2:04

Lightning coach Jon Cooper pulled Vasilevskiy with 6 minutes left and it paid off when Cirelli scored at 14:23. However, with Vasilevskiy off the ice again, Blueger picked up an empty-netter 30 seconds later.

Killorn got another Lightning goal with the extra attacker but Rodrigues and Rust got the Penguins’ second and third empty-net goals.

Pittsburgh outshot the Lightning 14-7 in the first period. Simon had his in-close chance stopped during a 2-on-1 by Vasilevskiy, and Rodrigues lost control of the puck on a breakaway.

What’s next for the NHL and the Metaverse?
Mangiapane nets 3-year deal, $17.4 million from Flames, avoids salary arbitration
San Jose Sharks 2022-23 Season Preview
Dave Feschuk: Proof linking head hits and CTE is a game changer. Just not in the NHL
Onyebuchi excited to be back for year two