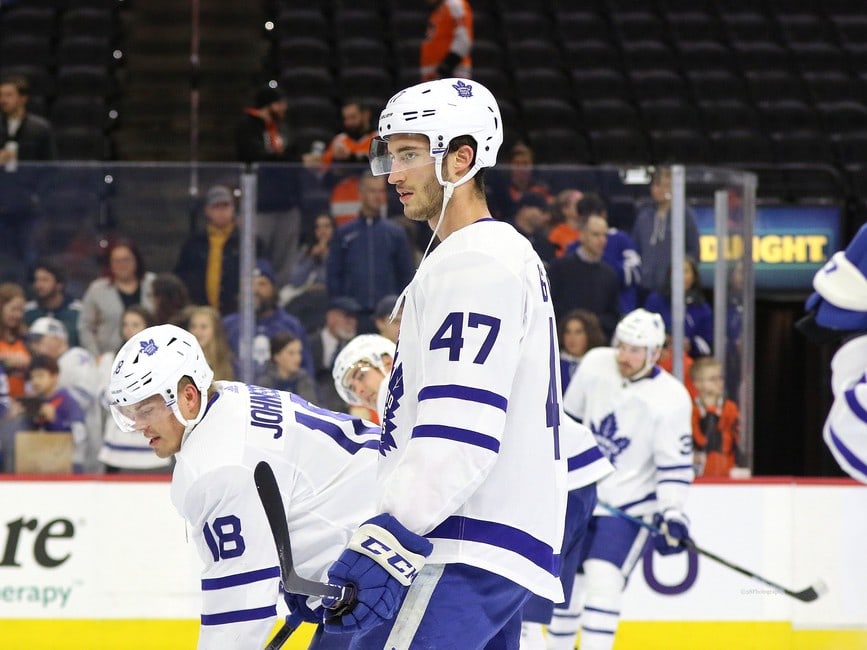 Third, because I know that many Maple Leafs’ fans like to keep track of former players, I’ll share news about two players from the past – Frederik Gauthier and Josh Leivo. Finally, now that preseason is over, I’ll look at the Maple Leafs’ scoring for the preseason games that have been played.

Item One: With Ilya Mikhehev Injured, Can Pierre Engvall Step Up?

The sad news is that, after what seemed to be a strong preseason, Ilya Mikheyev was injured during the first period of the final preseason game. In comments after that game, Maple Leafs’ head coach Sheldon Keefe seemed to note that Pierre Engvall might be given a chance to see if he can fill the gap that Mikheyev left.

By the way, in news that came just before publishing this post, it is reported that Auston Matthews will miss the first three games of the season.

Now the question is whether Engvall can take advantage of his chance to contribute. Although there were rumors that Engvall had fallen out of Keefe’s good books, Keefe spoke to the contrary after the game.

Keefe noted that, after Mikheyev was injured on Saturday night, Engvall was “trying to establish himself and I thought he did a really good job asserting himself once Mikheyev left. He skated and worked. He’s one of those guys who is going to get more of an opportunity now.”

Related: The 5 Greatest Hockey Players Ever

To my eyes, Engvall had lost some of his physicality over the past season or two. He scored only seven goals and five assists (for 12 points) in 42 games last season with the Maple Leafs. Can he accept the opportunity, embrace the challenge, and finally establish himself as a valuable player for his team?

In what was a total surprise to me, Adam Brooks was waived over the weekend. He seems exactly the kind of young player on a value contract who will be picked up by another NHL team; and, I’m wondering if his hometown team – the Winnipeg Jets – might be the team that does it. Brooks can score. He had four goals and added as assist in 11 games with the Maple Leafs, while also scoring four goals and 13 points in 17 Marlies’ games.

I know there are still a large number of Frederick Gauthier fans in Toronto. Just a note that The Goat was waived on the weekend by the New Jersey Devils. But that doesn’t mean his NHL playing days are over.

After his 2019-20 regular season with the Maple Leafs, he was signed by the Arizona Coyotes and played two games there last season without scoring. Gauthier was just signed at the end of this preseason Devils’ training camp (on October 8) for $800,000 and will likely be moved up and down as the regular season unfolds.

Related: Canucks Should Target These 4 Players on Waivers

Josh Leivo, another former Maple Leafs’ player, was waived by the Carolina Hurricanes. Sadly for Leivo, his stock has fallen since he was traded to the Vancouver Canucks. Leivo played last season with the Calgary Flames and had six goals and nine points in 38 games. He was signed this summer to the NHL league minimum salary of $750,000 but didn’t make the Hurricanes’ roster out of training camp.

Now that the preseason is over, I thought it would be interesting to look at the team’s preseason scoring summary. I knew that Michael Bunting had a strong preseason scoring, but I was surprised to remember that John Tavares led the team with five points in his three games.

That T.J. Brodie averaged more than a point each game was a huge surprise as well, as was Kirill Semyonov’s three assists. Here are the top 11 Maple Leafs’ scorers for the preseason.

What’s Next for the Maple Leafs?

I’ve been looking at some of the new players over the weekend to see what each might bring to the team. I’m also sensing a bit of a resurgence of fan interest in the team. One reader – almost scolding himself for feeling this way – admitted to some enthusiasm for this year’s team. I get it that fans believe their hopes will be lifted only to be dashed yet again. They might be right. Still … hockey’s a great game and fun to watch.

Hockey is also an absolutely crazy game. Sure, skill matters – a lot. However, it’s also a game of crazy puck bounces, where injuries and momentum matter. What I know as an old guy is that I get it now why my father was such a fan: almost anything can and does happen.

I’m ever hopeful for this Maple Leafs’ team and easily encouraged. I’m looking forward to the season.