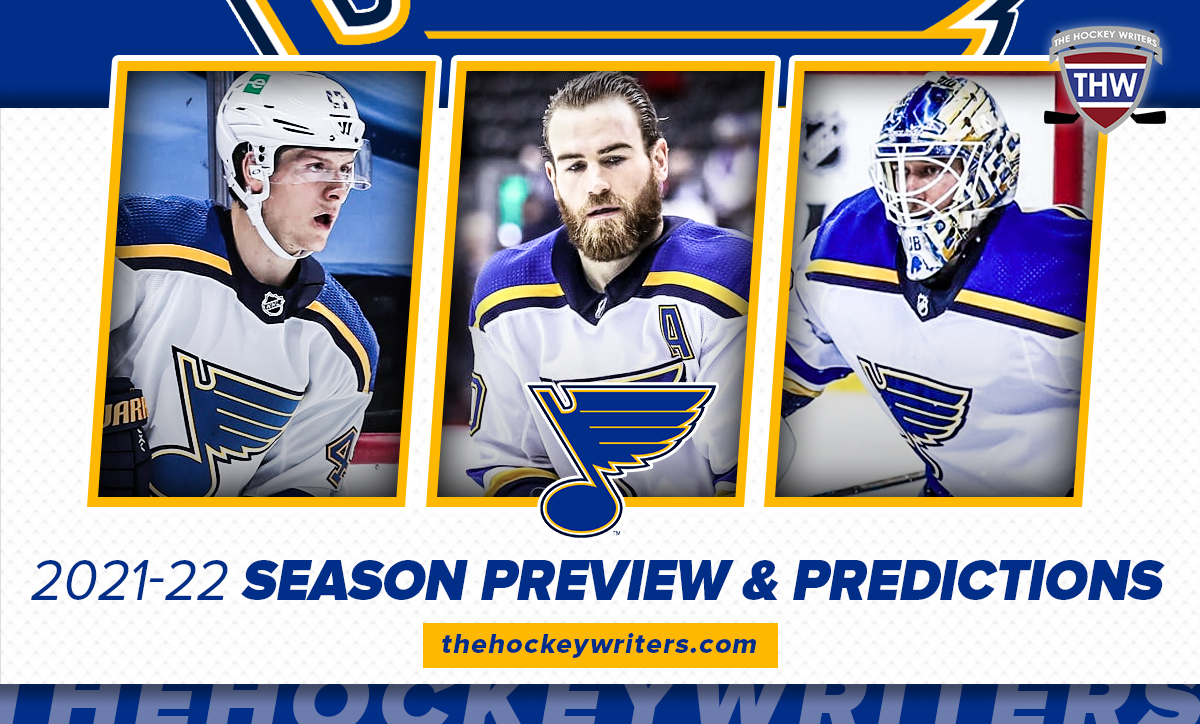 The St. Louis Blues will open their season on Saturday, Oct. 17 versus the Colorado Avalanche. Although the NHL season will begin five days prior to the Blues’ season, they should be ready to go. The team is looking to return to the playoffs and win a series, something they haven’t done over the last two playoff series.

In this piece, fellow Blues writer Stephen Ground and myself, Ethan Carter, will do our best to predict the upcoming season.

Who Will Score the Most Points?

It’s an easy answer, but Ryan O’Reilly has led the Blues in points two of the last three seasons and was largely responsible for David Perron surpassing him last season. He’s that talented. Now, armed with more weapons on the wing, whether it’s Pavel Buchnevich, Jordan Kyrou, or even Vladimir Tarasenko playing beside him, he’ll get at least 70 points and lead the team.

I agree with Stephen here, there is a small chance that anyone other than O’Reilly leads the team in points. He has been the best player on the team since the trade from the Buffalo Sabres in 2018. I’m looking for him to reach 75-plus points, with 25 or more goals.

If I had to advocate for other outside options to lead the team in points, it would be Perron or Buchnevich, I don’t see anyone else challenging O’Reilly. We could see all three of the players mentioned in the previous sentence on the same line, which is exciting.

Who Will be the Most Valuable Player (MVP)?

Blues fans have been predicting this for several seasons, but I believe this will be the season Robert Thomas finally evolves into a dangerous weapon and approaches or possibly surpasses 60 points. He has the added talent on the wings, and the team seems committed to him at center. He’s looked good in the preseason.

All he needs now is health. If he emerges as that kind of point contributor, in a non-first-line role on a new $2.8 million average annual value (AAV) contract, he’ll provide the most bang for the buck of any player on the team and will likely be the season MVP.

I’m going to go with newcomer Buchnevich as the MVP. The appeal with him is his versatility and skill — he’s also got a big body that suits the Blues’ style perfectly. I think he can produce on any of the three top lines for the Blues while being able to kill penalties and be a net-front presence on the power play.

I could see Brandon Saad as an essential player for the Blues, as well as Kyrou. But I will say the defensive outlook is bleak, I don’t see a scenario where they rank in the top half of the league in goals allowed. That means there isn’t an MVP candidate on the blue line.

The Most Surprising Player

With Jake Neighbours making the roster, you could almost call him the most surprising player by default. But I’m going in a different direction: I think Buchnevich will surprise fans the most. Blues fans are excited about their new player, but I think they are underestimating just how good he is. He is an absolute steal, both for the trade value the Blues surrendered and the contract they gave him. He was on a 30-goal pace for an 82-game season last season, and I believe he’ll hit it this year.

I think he’ll play in the top six and on both special teams at times. He will look dynamic and be a fan favorite by the season’s end. I think it’s analogous to Schenn’s first season with the team — everybody was happy about the deal, but no one expected him to come out and dominate the way he did right out of the gate. I think Buchnevich will fill a similar role. Let’s just hope he doesn’t grab a puck and hurl it down the ice in Game 1 as Schenn did!

I’m going to make it simple and go with Neighbours. With him making the roster, the Blues clearly believe that he is ready to go. He’s confirmed to be in the opening-game lineup in Colorado, I assume he’ll play somewhere in the bottom six.

We’ve already been surprised with what Neighbours has already done as their 2020 first-round pick. He is only 19 years old and he is a prototypical Blues player — his aggressiveness and two-way prowess are tremendous. He produced at a high level in the Western Hockey League (WHL), but this is an entirely new challenge.

I think he’ll rise through the lineup and produce a quality rookie season. I’m taking a risk of some sort here, as he could be back in the WHL within the next few weeks, but I think he’s proven that he has the ability to stick here for the season.

The Most Disappointing Player

I don’t like this question! It’s tough to single out a “most disappointing player.” You don’t want to pick on anyone. I will say, I am most concerned about Colton Parayko. Nebulous back injuries scare me, and after he just signed a long-term contract extension, any hint that he isn’t fully healthy and ready to go will send fans into a tailspin. Even if he is, though, I have another concern: there has been plenty of talk about Parayko stepping up to replace much of the role vacated by Alex Pietrangelo.

He was off the hook last season with the injury. But there is little issue — Parayko is not Pietrangelo. Parayko is 28 now and has never surpassed 35 points in a season. Pietrangelo has eight 40-plus point seasons under his belt (four of those above 50). Parayko isn’t going to suddenly replace that kind of point potential, nor that power-play leadership.

There’s a reason he just signed an eight-year deal for over $2 million per season less than Pietrangelo signed for. So, players expecting Parayko to replace Pietrangelo are already setting themselves up for disappointment. Any hint of injury on top of that would lead to pure panic.

This is a tough one to figure out, but I’ll go with Kyrou. To be fair, I didn’t want to take the easy way out and make a popular choice. I’m not saying that he won’t produce, but I think he’ll take a step back from where he was last season. Similar to what we saw last season with Thomas, his numbers were down and he had injuries.

Most people are expecting a big season from him and I think he’ll disappoint with a 40-point or less season, which isn’t that bad. There is a lot of pressure on Kyrou to have another breakout season and get to 60 points, but I feel like he will have a down season of some sort. The definition of a down season for Kyrou is still a solid number of points.

I think the Blues will finish with 93 points. They won’t be an elite team, I think they’re looking at this season, not as a rebuild, necessarily, but as a step in a process.

Tarasenko is still here, and that won’t last forever. There is no secret the team would love to pry away Matthew Tkachuk if the Calgary Flames choose to trade him, either during the season or during the next offseason. They’ll show a lot of improvement in some significant areas this season, but they’re not a top team.

I’ll go with 97 points, I think they can win around 42 games, and probably have a high amount of overtime and shootout losses. This is an important season in terms of pressure on the coaches and players, with the idea being that they can finish within the top three of the Central Division.

The Blues will make the playoffs as the third or fourth team in the Central Division. If they push to third place (or even to second place), they could beat the Minnesota Wild or the Winnipeg Jets in a seven-game playoff series and make the second round.

However, as we saw last season, all roads through the Central Division must pass through Denver, and the Blues are not at all ready to handle the Avalanche in the postseason. The second round is probably their ceiling this season, but if they get there, that’s a significant improvement on two lackluster seasons recently.

As I mentioned earlier, I believe they’ll get into the playoffs as the third-place team in the Central. I believe they’ll beat the Dallas Stars in the first round, making that four straight series wins over them dating back to 2001. They have beaten the Stars twice in the last five playoffs.

The ceiling is more than likely a second-round exit, while the floor could be a disastrous sub-90 point season where head coach Craig Berube could be fired. I think they’ll be better than last season and that players like O’Reilly and Perron will continue to lead the team.

Well, everybody should be excited about this season. Not only should the Blues be a good team, but we have a full 82-game season upon us. It feels so good to have a full season and for those of us in the United States, we get to see a new era of broadcasting with ESPN and TNT on board.

If COVID-19 taught us anything, it is to enjoy a full season like this more than ever. We’ll see how the Blues play, I believe we will see a good season from them, but you never know.

I have been covering sports for nearly a decade. I started with FanSided as a Baseball Contributor. Now I am writing about the NHL and the St. Louis Blues for The Hockey Writers. I grew up in Central Illinois as a huge fan of every sport. Finally, I do various podcasting across all major platforms.