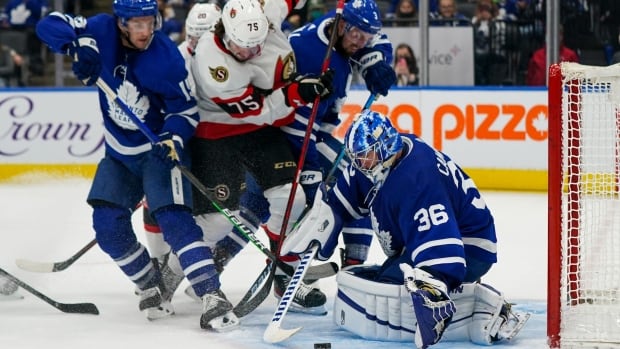 Captain John Tavares scored a goal and set up another to help the Toronto Maple Leafs win their fourth in a row in their pre-season finale on Saturday.

This outing was the final pre-season tune-up for both Ontario teams. The Maple Leafs will open the 2021-22 season at home against the Montreal Canadiens on Wednesday and then travel to Ottawa for the Senators’ curtain-raiser on Thursday.

While the pre-season matters little to indicate regular-season and playoff success, Tavares showed he overcame the scary incident in the Maple Leafs’ playoff opener against the Canadiens four-and-a-half months ago.

Tavares suffered a concussion when the knee of Montreal forward Corey Perry slammed into his face a split second after Canadiens defenceman Ben Chiarot knocked him down.

The Maple Leafs remained without Auston Matthews on Saturday. He is listed as day-to-day, recovering from his off-season left wrist surgery on Aug. 13.

Special teams were the difference in the pre-season finale. Toronto scored a power-play goal and added another as an Ottawa penalty expired while the Senators struggled, going 0 for 4 with the man advantage.

Toronto’s Nick Ritchie netted the perfect pass from Wayne Simmonds in their 4-1 preseason victory over Ottawa. 1:11

The provincial rivals finished the first period tied 1-1. The Senators were sloppy and disorganized with two early power-play opportunities.

The casual play allowed the Maple Leafs to break through first with a power-play goal of their own. Morgan Rielly’s 56-foot shot deflected off Ottawa defenceman Josh Brown and past goalie Matt Murray midway through the first 20 minutes.

The Senators got even in the final seconds of the opening frame when former Toronto forward Connor Brown set up linemate Alex Formenton with a nifty pass on a two-on-one rush with 13 seconds remaining.

One burning question for each Canadian NHL team

The 7 Canadian teams are no longer all in the same division, which leaves a lot of questions. Rob Pizzo breaks some of them down. 6:03

Late in the first period, Toronto second-line forward Ilya Mikheyev fell awkwardly on his hand when knocked to the ice by Ottawa defenceman Dillon Heatherington. Mikheyev left the game and did not return.

The Maple Leafs found their stride in the middle period without the Russian forward, scoring three times in a 9:28 span.

The fourth line combined for impressive passing play off the rush. Nick Ritchie put the finishing touches on a play started by Jason Spezza to Wayne Simmonds, who found Ritchie cruising toward the Senators goal.

Pierre Engvall converted an excellent pass from Tavares on the power play at the 8:17 mark, six seconds after Victor Mete’s holding penalty expired.

The Edmonton Oilers scored on the power play and shorthanded to defeat the Vancouver Canucks 3-2 Saturday night in the final NHL exhibition game for both teams.

Evan Bouchard, on the power play, and Brendan Perlini scored 49 seconds apart for Edmonton in the first period. Kailer Yamamoto added the shorthanded goal in the second period for the Oilers (6-1-1).

Kailer Yamamoto scored on the penalty kill during the second period of Edmonton’s 3-2 victory in Vancouver. 1:01

Goaltender Mikko Koskinen played the first period for Edmonton, stopping all 11 shots he faced. Stuart Skinner stopped 15-of-17 shots over the final 40 minutes.

Phillip Di Giuseppe and J.T. Miller scored in the third period for the Canucks.

Di Giuseppe tipped in a Matthew Highmore shot at 13:44. With Canuck goaltender Thatcher Demko on the bench for an extra attacker, Miller scored at 17:42 off a pass from defenceman Quinn Hughes.

Demko faced 18 shots for the Canucks, who finished the pre-season with a 2-5-0 record.

The Oilers took a 3-0 lead on Yamamoto’s shorthanded goal at 6:26 of the second period. With defenceman Kris Russell off for interference, Derek Ryan and Yamamoto forced Hughes to cough up the puck. Ryan took the loose puck, skated into the Canucks zone, then passed to Yamamoto who scored his first of the pre-season.

Bouchard had a busy first period after the defenceman was assessed two penalties and scored the game’s opening goal. With Vancouver’s Miller off for interference, Bouchard fired a blistering shot from just inside the blue line that beat Demko at 16:20. Left winger Warren Foegele was screening Demko.

Edmonton made it 2-0 at 17:09 when Russell fed Colton Sceviour a long pass behind the Vancouver defence. Sceviour skated to the side of the Canucks net then passed back to Perlini who beat Demko for his sixth goal of the pre-season.

The Canucks lost 3-2 in Edmonton on Thursday night. The teams will play each other again Wednesday in their NHL regular season-opening game.

A new season is upon us, and Rob Pizzo gets you caught up on a very busy offseason. 2:04