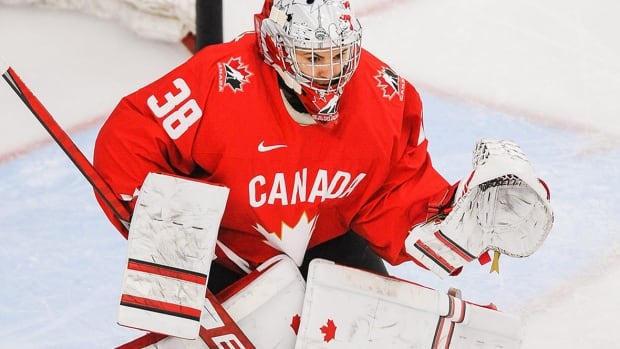 The Canadian women’s hockey team will play Alberta Junior A men’s teams as part of its preparation for February’s Beijing Olympics.

Canada will play road games against the AJHL’s Drumheller Dragons on Oct. 18, the Olds Grizzlies on Oct. 29, and Camrose Kodiaks on Nov. 3 before facing the Calgary Canucks in Calgary on Jan. 10.

Canada lost 8-3 to the BCHL’s Cranbrook Bucks and 5-1 to the Trail Smoke Eaters in its first games since winning the women’s world hockey championship Aug. 31.

The national women’s team is currently centralized in Calgary in preparation for Beijing. Twenty-six skaters are trying out for 20 spots on the Olympic roster.

Three goaltenders have already been named to the Beijing-bound side: Ann-Renee Desbiens, Emerance Maschmeyer and Kristen Campbell.

Maschmeyer is an AJHL alumna having appeared in seven games for the Lloydminster Bobcats during the 2011-12 season. Her record was 2-2-1.

Canada’s 23-play Olympic roster is expected to be announced in December.

The women are accustomed to a regular slate of games against male triple-A clubs as part of their Olympic prep, but games against Junior A teams were previously rarer.

Goaltender Shannon Szabados, another AJHL alumna, made 52 saves in Canada’s 3-2 win over the AJHL’s Calgary Canucks on Dec. 5, 2009.

Canada split a pair of Maritime Junior Hockey League games in September of 2019, when the women lost 4-2 to the Valley Wildcats and downed the Pictou County Crushers 4-1.

Marie-Philip Poulin scored a fantastic goal to give Canada the 3-2 win and their first gold medal at the worlds since 2012. 2:21