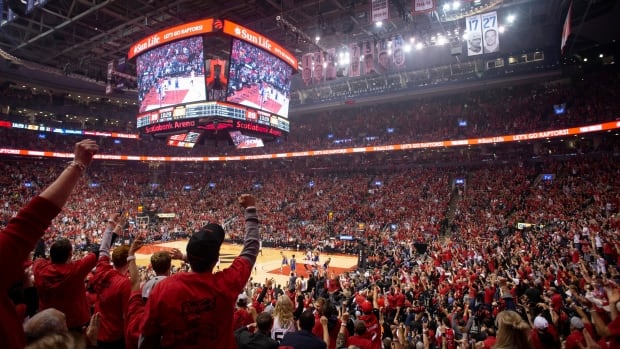 Ontario’s major indoor pro sports teams have been given the green light to host capacity crowds.

The NHL’s Toronto Maple Leafs and Ottawa Senators and the NBA’s Toronto Raptors will be able to play in front of full arenas of fans when their seasons start later this month, Ontario Sports Minister Lisa MacLeod announced Friday.

The indoor capacity limits will be lifted in the arenas beginning Saturday at 12:01 a.m. ET.

“Throughout the process of re-opening our venues to fans, which included working closely with the Province over many months, health and safety has been our shared top priority and we are overjoyed to see this day arrive when we are able to welcome a full venue to cheer on the Maple Leafs and Raptors,” Michael Friisdahl, president and CEO of Maple Leaf Sports and Entertainment, said in a statement.

“Today … is an exciting day for our teams, our fans and our community and we look forward to a safe and enjoyable season.”

Concert venues, theatres and cinemas are among the other facilities that will see capacity lifted.

Proof of vaccination will be required to attend.

The move to allow full capacity had been widely expected after Ontario had raised capacity at indoor venues to 50 per cent or 10,000 fans, whichever number is lower.

While the change goes into effect Saturday, an MLSE spokesperson said the Leafs’ season opener on Wednesday versus the visiting Montreal Canadiens would be the first full house at Scotiabank Arena.

The Raptors open their season Oct. 20 against the visiting Washington Wizards.

The Ottawa Senators host Toronto next Thursday in their home opener.

The new rules leave the Vancouver Canucks as the only NHL team without full-capacity crowds. COVID-19 protocols in B.C. still limit indoor crowds to 50 per cent capacity.

3 Canucks Prospects to Watch at Rescheduled 2022 WJC
3 Capitals Who Must Step Up in 2022-23
Blackhawks, Wild to play in Milwaukee on Oct. 2
Canada goes unbeaten in preliminaries after 3-0 win over Sweden at Hlinka Gretzky Cup
NHL Rumors: Flames, Bruins, Blues, Golden Knights