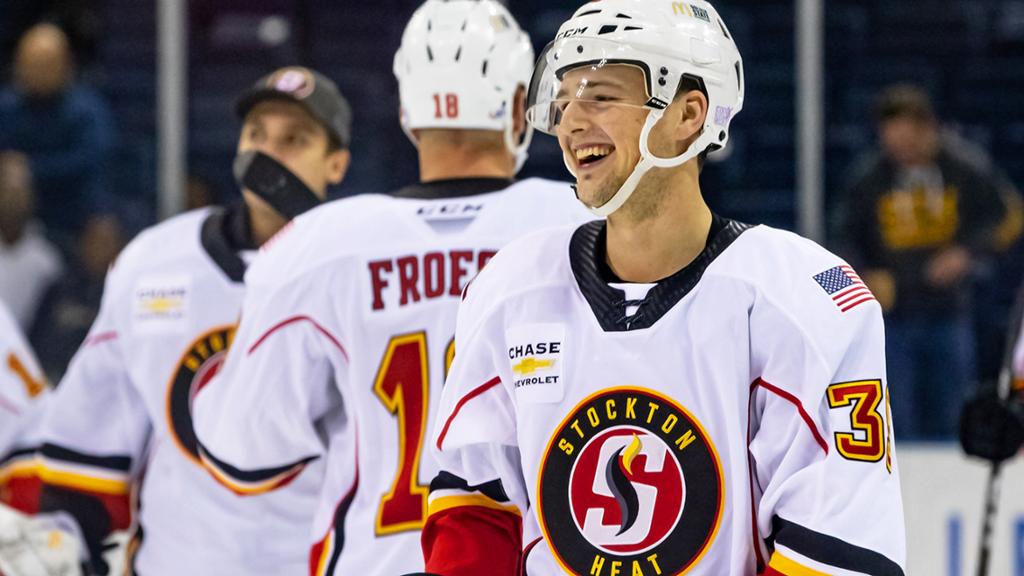 He was right there.

This close to getting a shot.

But then, through no fault of his own, the rug was pulled out from under him.

“It was unfortunate timing last year, with the potential of maybe getting in a game at the end,” said Luke Philp, who was primed to make his NHL debut last May before suffering a head injury in practice. “That’s the way it goes sometimes.

“Injuries tend to have bad timing.”

While nothing was official, Flames head coach Darryl Sutter went out of his way to recognize Philp’s efforts with the Stockton Heat last year, viewing him as one of the team’s talented up-and-comers that had earned a late-season audition.

Certainly, the preseason doesn’t have the cachet of a crucial, regular-season tilt, but Philp will slip on the Flames duds for the first time in two years tonight when he makes the trip to Abbotsford to show Sutter what he’s got.

Maybe that long-awaited debut isn’t so far off, after all.

“We talked about trying to get him in a game somewhere to have a look at him and it didn’t happen, so it’s good that he’s healthy now and we can get him in,” Sutter said. “He’s in a competition. Nobody talks about him – they talk about two or three other guys that, quite honestly, didn’t play very well last night and will get one more opportunity tonight.”

Video: “I’m very excited to get in tonight”

Philp doesn’t dwell on the opportunity that slipped away only four months ago. He can’t afford to. Instead, he’s used it as motivation to push himself even further, and come into camp with a simple goal in mind.

As he has done so often in his career, the 5-foot-10, 181-lb. pivot has willed his way into the conversation.

“You have to look forward to getting another chance, right? You can’t look in the past and (wonder) what could have been,” he said. “I tried to have a really good summer and a really good camp here.

Philp has played in one career preseason game – a road affair way back in 2019 when the Flames dropped a 4-1 decision to the San Jose Sharks.

The Canmore native was coming off a nasty ankle injury that he suffered in the spring as a member of the Canada West powerhouse University of Alberta. The USports Player of the Year signed his entry level contract shortly thereafter, and was back to 100% in time for the fall’s penultimate exhibition contest.

Since then, he’s been absolute stud with the Flames’ AHL affiliate, recording 27 goals and 48 points in 82 games over two seasons on the farm.

“It’s about being consistent, right” the 25-year-old said of his development and the steps he’s taken at this level, in particular. “That’s what you learn, the first thing when you come to pro hockey. You need to be consistent and you can’t bring a good effort one night – you have to do it night after night.

“If you’re consistently reliable at both ends of the ice and you’re making smart decisions with the puck, you can earn your coach’s trust and earn more ice time.

“That’s what I’ve tried to do these last couple of years.”

Philp will play on a line with Glenn Gawdin in the middle and big Martin Pospisil on the opposite flank tonight.

In this league, you never know how many opportunities you’ll get.

But with a keen eye on No. 48 tonight, this could be the biggest, by far.

“It’s nice to hear you’re close, but you want to keep pushing to make the veterans that are in the lineup know that you’re right there and you want to be there,” he said.

“That’s what we’re all doing and what these games are for.”