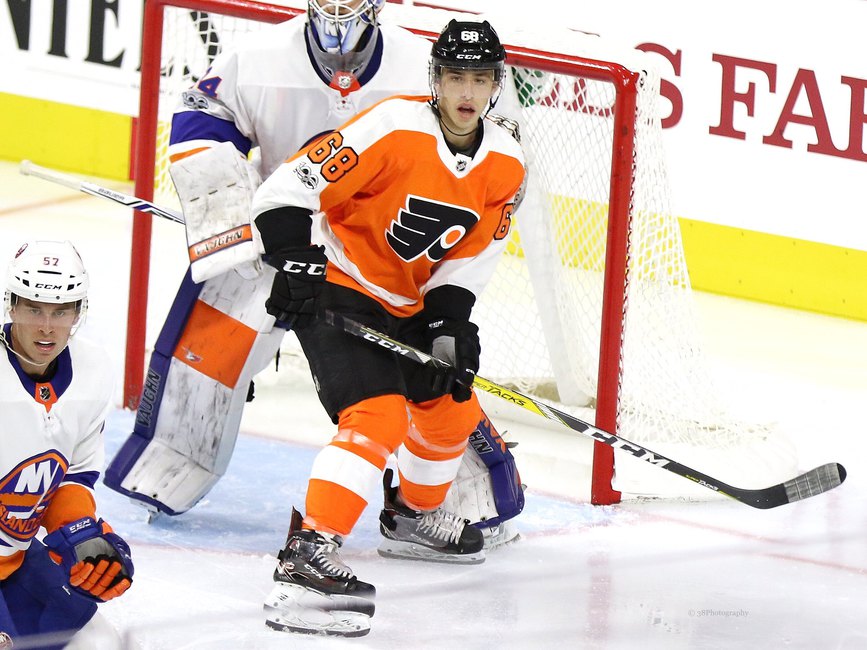 Welcome to the Philadelphia Flyers News & Rumors, where we will look at the latest training camp news with the Flyers’ roster. Kevin Hayes and Wade Allison will miss the start of the team’s season as both players are recovering from injuries with the former on the mend from abdominal surgery, which will keep him out of the lineup six to eight weeks, likely until mid-to-late November. Allison sustained a right ankle sprain in a rookie game against the New York Rangers and will be out indefinitely while defenseman Samuel Morin, who was projected to begin the year outside the team’s three starting defensive pairings, will be out six to eight weeks with a knee injury.

What players who were on the roster bubble prior to the injuries to the two Flyers forwards now have a chance to take advantage of an opportunity to make the opening night roster? Let’s take a look.

Frost Has Opportunity to Crack the Flyers Lineup

Center Morgan Frost has a better chance to make the Flyers roster on opening night with the injury to Hayes. The 22-year-old is coming off a season in which he only played in two games before his year was shortened by a shoulder injury and is looking to redeem himself by contributing to the top six for the orange and black. If he is not placed on the second line, he will contribute as the center to the third or fourth line, which would give him the opportunity to play with other young players on the Flyers roster such as wingers Oskar Lindblom, Nicolas Aube-Kubel, and Joel Farabee. A young line with Frost as the center has the chance to provide the Flyers with a lot of speed and energy, which was lacking last season during the team’s struggles aside from when Allison was called up to the roster.

Frost may not receive top-six minutes consistently at the start of the season as Flyers head coach Alain Vigneault will give veteran players such as free agent acquisition Derick Brassard and center Scott Laughton opportunities for ice time on the bottom six. Claude Giroux, who has played more time at the wing position than center in recent years, could be a candidate to switch back to the center position on the second line and be Frost’s biggest competition for minutes on the top six. The Flyers head coach has preferred to give more ice time to veterans over younger players based on his previous head coaching experiences with the Vancouver Canucks and the New York Rangers.

According to a question about Frost’s projection for opening night in a mailbag column by Charlie O’Connor of The Athletic, the writer includes the following.

“So far, Frost has been centering James van Riemsdyk and Joel Farabee, so the Flyers are giving him every opportunity to run with the job as a scoring 2C/3C, and he’s performed well in practice. That said, Frost’s outlook could change dramatically depending on his work in preseason games. Vigneault also made clear on Friday that it will be game results that mostly drive the coaching staff’s decisions, not practice performance” (from “Flyers mailbag: Will Morgan Frost make the opening night roster and which prospects might join him? – by Charlie O’Connor, The Athletic, 9/26/21).

Frost can earn a permanent spot on the Flyers roster with a strong preseason and a good start to the opening month of the regular season.

The Flyers training camp began on Sept. 23, and Vigneault debuted the following line combinations, which included center Sean Couturier and wingers Giroux and Travis Konecny on the top line, followed by the second line centered by Frost with wingers van Riemsdyk and Farabee. The third line consists of Brassard at center with Lindblom and Cam Atkinson at the wing positions, and Nate Thompson centering the fourth line with Laughton and Aube-Kubel at the wing spots. O’Connor wrote in his mailbag piece that Vigneault will keep the lines the same for the first five practices and the initial two preseason games.

The defense will be headlined by Ivan Provorov and Ryan Ellis. The Flyers are hoping the new defenseman for the orange and black can replicate what former defenseman Matt Niskanen did for Provorov when the duo were paired together prior to last season. The young Flyers defenseman had more productivity when he was paired with a seasoned veteran in Niskanen. The other defensive pairings will include Travis Sanheim and Rasmus Ristolainen followed by Keith Yandle and Justin Braun.

The Flyers have an opportunity to mix and match their line combinations with the injuries to Hayes and Allison. The open center position that was occupied by Hayes allows for Vigneault to figure out which player or players can fill his spot five-on-five and on special teams. The younger players in the organization have an opportunity to prove they belong playing in the NHL by making an impact through their play in the preseason.

Matt covers the Philadelphia Flyers and the Pittsburgh Penguins for The Hockey Writers. Matt’s priority is to contribute exceptional content about the Flyers and Penguins for THW and its readers. Matt is the co-host of the Focus on the Flyers YouTube show presented by THW. To see more of Matt’s writing, visit his portfolio. For interview requests, follow Matt on Twitter that appears at the end of articles for THW.