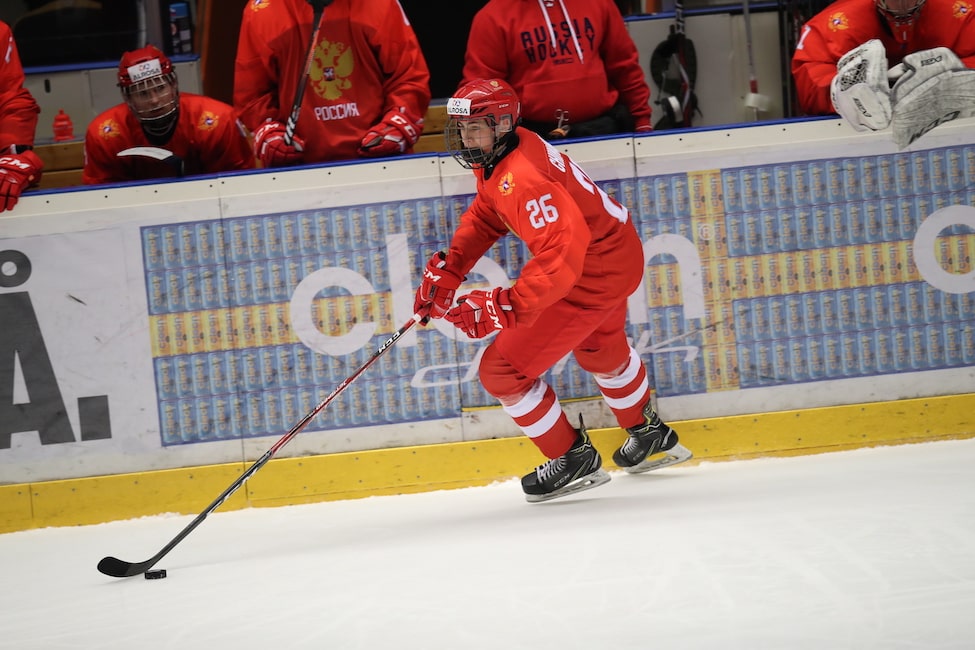 The excitement and anticipation surrounding Columbus Blue Jackets 2020 first-round draft pick, Yegor Chinakhov, has started to build. After his performance in the 2021 Traverse City Prospects Tournament, that excitement has reached its peak. The Russian right wing recorded a tournament-leading six goals on 13 shots with a shooting percentage of 46.2%. This piece will explore why Chinakhov could directly impact Columbus during the upcoming season.

When Columbus general manager Jarmo Kekäläinen and the Blue Jackets selected Chinakhov with the 21st pick in the 2020 Entry-Level Draft, few even knew who he was. Once videos of Chinakhov and his shot surfaced that same night, he started to become one of the more, if not the most, anticipated prospects the Blue Jackets had.

“I think he has a very high skill level and great on-ice awareness. He can see the ice and make plays. He’s got good one-on-one skill and a tremendous shot, as you mentioned,” Kekäläinen said to the media after drafting Chinakhov. “He’s got a lot of different qualities that we think are going to translate to the North American game and the NHL game. And that’s why we drafted him where we did, and that’s why we had him so high on our list.”

Despite Chinakhov flying under the radar, Kekäläinen and the Columbus scouts knew who he was, and they weren’t willing to lose him to another team. After Traverse City, it looks like the scouts did their job, and the organization was right to draft him where they did.

Chinakhov Has Proven He Can Hang With NHL-Level Talent

In his four seasons overseas, Chinakhov had 107 points in 129 games with Omskie Yastreby of the MHL and Avangard Omsk of the KHL. He also averaged .83 points per game in those four seasons. Included in those totals were 46 goals and 61 assists.

In Traverse City, Chinakhov scored six goals in three games for a rate of two points per game. Even though it was a small sample size of games, he showed he was comfortable in the Blue Jackets’ system.

Even though he only played against other prospects in Traverse City and only played three games, Chinakhov proved he can succeed in the NHL. Every prospect in the Tournament has NHL-level talent, and he looked comfortable. When you take away the sample size of games and the opposition were only prospects. It is clear that Chinakhov has the tools to excel in the NHL.

In episode four of the Union Junction Podcast, I asked our guest, Cleveland Monsters beat writer for Field Pass Hockey Deana Weinheimer, if she thought Chinakhov or Sillinger had the most significant chance to impact the Blue Jackets this season. She very quickly said Chinakhov.

“That shot from Chinakhov, especially on the powerplay that, you know, Ovechkin-esque shot, I think the Jackets could really use that on a power play that we all know has had its struggles in several past seasons,” Weinheimer said. “He has had that experience playing in the KHL. That’s going to be big in the minds of the Blue Jackets brass. So I would say he would probably have the best shot of making the best impact. Sillinger had some skating issues. I mean, he was still in the right place, but he wasn’t the most efficient skater. But he made up for it in having good positioning. I just like Chinakhov’s shot so much, and I was thinking the Jackets need him so bad.”

With the shot Chinakhov showcased in the Prospects Tournament and his KHL experience, he could likely find playing time in Columbus, help the power play, and show that the Blue Jackets were correct to pick him in the first round.

Chinakhov’s Shot Is a “Blast”

For someone who was nearly unknown on his draft night, Chinakhov proved his worth in Traverse City, showing that he is ready to compete against NHL-level skill and that his game will translate to the North American game.

His shot is described as his best asset, and Deana Weinheimer agrees. She was impressed and showed that many times when discussing his shot. She went as far as to describe the shot as a “blast.”

“That shot, which that thing’s a blast, okay,” Weinheimer said. “People just watch it. Watch it. We’re going to be calling that shot a lot.”

Cody Chalfan is currently a journalism major at the Ohio State University who grew up in Columbus and loves hockey, especially the Blue Jackets. He is disabled, therefore he is a major advocate for the NHL’s Hockey is for Everyone movement.  A piece he wrote focusing on the Blue Jackets’ work on expanding the sport into the local special needs community can be found here. Cody can be contacted via Twitter (@cachalfan) direct message for comments, constructive criticism, or story ideas.