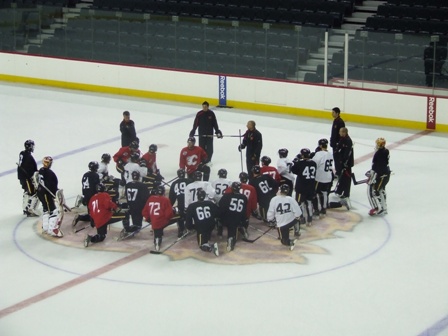 I don’t think any of the youngsters invited to Calgary Flames rookie camp have much of a shot at cracking the big club’s roster this season as things stand now. That’s not an indictment of the club’s prospect pool, nor is it to suggest that the rookie camp this year isn’t important. It’s just that the recent signings of NHL old-timers to one-year contracts (something the club did last year, too) has most likely shut the door for prospects and rookies I thought could make the team.

Last month, I foolishly went out on a limb and named five Calgary Flames prospects who I believed had a reasonable shot at wearing the Flaming C this season. Among them were rookies Jakob Pelletier at centre (a long shot, I said) and Johannes Kinnvall at right defense.

Related: 5 Flames Prospects Who Could Crack the 2021-22 Roster

In another recent piece, I told readers that Connor Zary was a young gun who would never be part of a trade package – that is to say, he is untouchable, at least for now. Not only that, but back in May, I said Emilio Pettersen deserved a look in the last few meaningless games of last season’s schedule with the Flames, who, at that point, were out of contention for a playoff spot. While I didn’t predict that either could make the roster this season, I was hinting that was a possibility.

Still, even though it’s unlikely we’ll be watching any of this year’s crop of rookies skating in Calgary, rookie camp still bears close watching.

Every rookie camp is an opportunity for youngsters to showcase their potential before returning to the minors or junior leagues. Not only that, but if their rookie camp is good enough, some could beinvited to the Calgary Flames’ main camp starting Wednesday next week.

For 2021 draft picks, and there are five of eight at camp this year, a successful camp can reassure team management that they have made the right choice. New picks will be watched closely for confirmation that the scouting team did its job.

I had previously predicted that established prospects Adam Ruzicka and Glenn Gawdin could crack the roster at centre, but that is no longer assured, given the acquisition this summer of Sutter stalwarts Trevor Lewis and Brad Richardson, along with other aging warhorses. Even so, trades and injuries could mean Zary gets a chance to elbow his way onto the roster.

In Saturday night’s game against the Edmonton Oilers’ rookie squad, Zary was reportedly a factor on every shift. He played alongside Dmitry Zavgorodniy and Martin Pospisil.

Pelletier was also noticeable in the game, playing a huge role in a cycling play during which he fed Walter Duehr with a gorgeous pass to set him up for Calgary’s first goal. As an aside, with two points in the game, the Stockton Heat-bound Duehr no doubt moved himself up the list of prospects Flames management will be focusing on.

Like Zary, however, Pelletier would most likely need injuries and trades to position himself for a call-up. Even then, he would need to beat out an established player like Brad Richardson for a job at centre.

Some pundits have speculated that Dustin Wolf could displace Adam Werner as the Flames’ number three goaltender this season. Based on what management has seen of him in the three games he played in Stockton last season and against the Oilers last night, it’s possible.

The question is why the Flames would want to relegate him to the number three position rather than giving him regular playing time in Stockton, especially given the hopes they are placing on him as the team’s future number one in the crease. Even so, it looks like Sutter will ride starting goaltender Jacob Markstrom hard, and they will need a third puck stopper to rest him when needed.

I predicted that Kinnvall had a shot at right defense, given how depleted the Flames were earlier this summer on that side of the rink. Recent veteran signings solved that problem and have probably eliminated any expectations management had of seeing the young Swede making the big club this season.

Still, this season will be his first playing in North America, and he will be watched closely to see if he can make the transition from the Swedish Hockey League. His slick puck work setting up Pospisil on the Flames’ third goal last night is a good indicator that he should be able to make the transition.

Flames management will also want a close look at Yan Kuznetsov to confirm the glowing assessments of the 6-foot-4, 215-pound defenceman, who newly arrived in Stockton late last season following his final year with the University of Connecticut in the NCAA.

It’s not unusual in the world’s best hockey league for teams to send all of their rookies back to junior, their farm system or other leagues for further seasoning after rookie camp. The road to the NHL is a tough one, and few rookies ever make it based on their first camp. Yet that doesn’t make them any less important. Good rookie camps are a stepping stone to the NHL, and every rookie knows it.

Paul covers the Calgary Flames, the Ottawa Senators and the OHL’s Ottawa 67s for The Hockey Writers (THW). He also hosts the Flames Faceoff show for THW’s Podcast Network.

Paul has been sought for media interviews for the thoughtful pieces he has written on hockey’s response to the major social and political issues of the day including the place of gay players in the game. Paul is also known for his interesting perspectives on the key issues and challenges facing the teams he follows.

Of his work with THW, Paul says,  “I love to tell stories about the game of hockey and the personalities – both past and present, who have made it the greatest game on the planet!”

Shea Weber’s Best Moments With the Canadiens
Nelson joins Bears as new head coach
What you need to know ahead of the restaged 2022 World Junior Championships
England vs Australia | Women’s Hockey Finals | Birmingham 2022 | #B2022
3 Takeaways From Sweden’s 6-0 Win vs. Austria