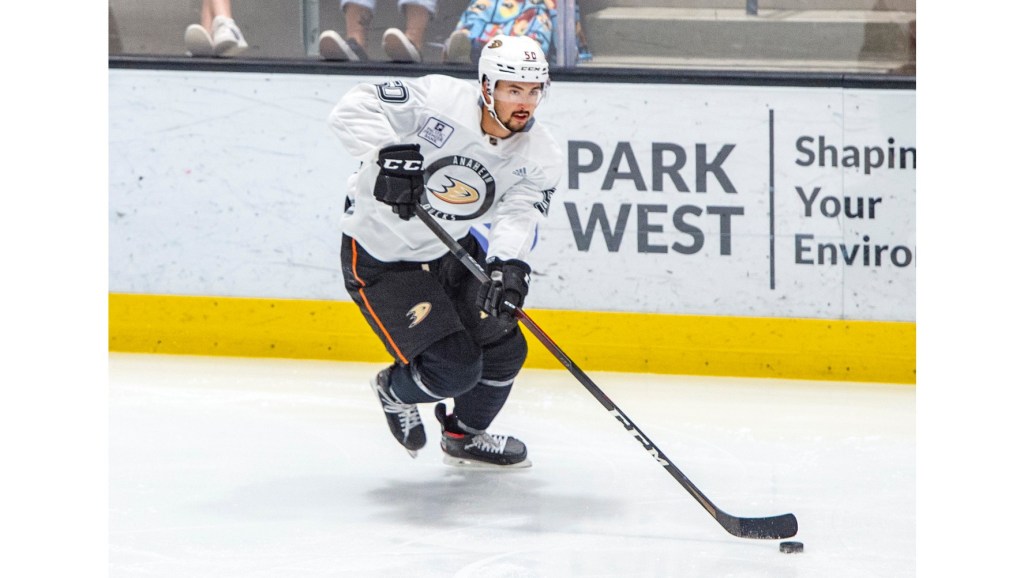 IRVINE — The pass from a teammate was quick and on target.

So was the shot.

In a nanosecond, Benoit-Olivier Groulx one-timed the puck past goaltender Roman Durny and into the back of the net, one of many highlights during the Ducks’ rookie team practice Thursday at Great Park Ice, ahead of their participation in the Rookie Faceoff Tournament in Arizona.

The bus to Scottsdale departed Irvine with five first-round draft picks aboard, including Jamie Drysdale (sixth overall in 2020), Mason McTavish (third in ’21) and Trevor Zegras (ninth in ’19). Groulx wasn’t one of the five, having been selected in the second round (54th overall) in 2018.

Groulx, a 21-year-old center, emerged as one of the Ducks’ top prospects after only one season with their AHL team, the San Diego Gulls, following a stellar career in the Quebec Major Junior Hockey League. He was the Gulls’ third-leading scorer with 29 points (10 goals, 19 assists) last season.

Groulx’s game doesn’t feature the same sort of sizzle as Zegras. Groulx and Zegras play the same position, but different games. Zegras is a flashy playmaker who can bring fans to the edge of their seats. Groulx also can produce, but in ways that don’t always make the nightly highlight reels.

Subtle play can be effective, too.

Solid two-way play is always welcome at all levels of hockey, and especially in the NHL.

“I know what they expect of me,” Groulx said of his role during the upcoming tournament. “I’m one of the older guys here and they expect me to lead the way on and off the ice. I think since I am one of the most experienced in terms of NHL camps, I’m going to help the young guys.”

After a slow start to his rookie season in San Diego, Groulx found his comfort zone. By season’s end, he had claimed a pivotal role, taking and winning key, late-game faceoffs in the defensive zone and defending against the opposition’s top centers. He accepted it willingly and he excelled at it.

The past is in the past, though.

Groulx has high expectations for himself this coming season, perhaps even battling for a roster spot when training camp begins for the entire squad next Thursday at Great Park Ice. The Ducks’ first exhibition game is Sept. 26, and they open the regular season on Oct. 13 against the Winnipeg Jets at Honda Center.

“I just want to come here and show that I improved a lot this summer,” Groulx said. “I had a really, really, really good offseason. A lot of power. A lot of speed. I want to show it in the Rookie Tournament. After that, in the main camp, I just want to go one day at a time. I don’t want to put too much pressure on myself in making the roster on opening night. (But) I really want to show how much I improved over the summer.

“I think good things will happen if I do that.”

Groulx impressed Gulls coach Joel Bouchard long before hitting the ice for the Ducks’ development camp earlier this month. Bouchard, hired to replace Kevin Dineen as the Gulls’ coach during the offseason, is a longtime friend of Groulx’s father, Benoit, and faced Benoit-Olivier’s teams, while coaching in the QMJHL.

“I know ‘B-O’ from scouting him in midget and coaching against him in the Quebec league,” Bouchard said. “It’s always fun to see young guys grow in hockey, to see them at 15 and to see them at 22 or 23. I saw ‘B-O’ back in the day and all of a sudden you’re seeing him becoming a good pro.

Canada scores early, often to down Sweden, claim gold in Hlinka Gretkzy Cup
Canada goes unbeaten in preliminaries after 3-0 win over Sweden at Hlinka Gretzky Cup
Flames Not Focused on Final Years of Huberdeau Extension
Mikko Koivu caps his 1,000th NHL game with SO winner for Wild
Chair of Hockey Canada’s board of directors resigns