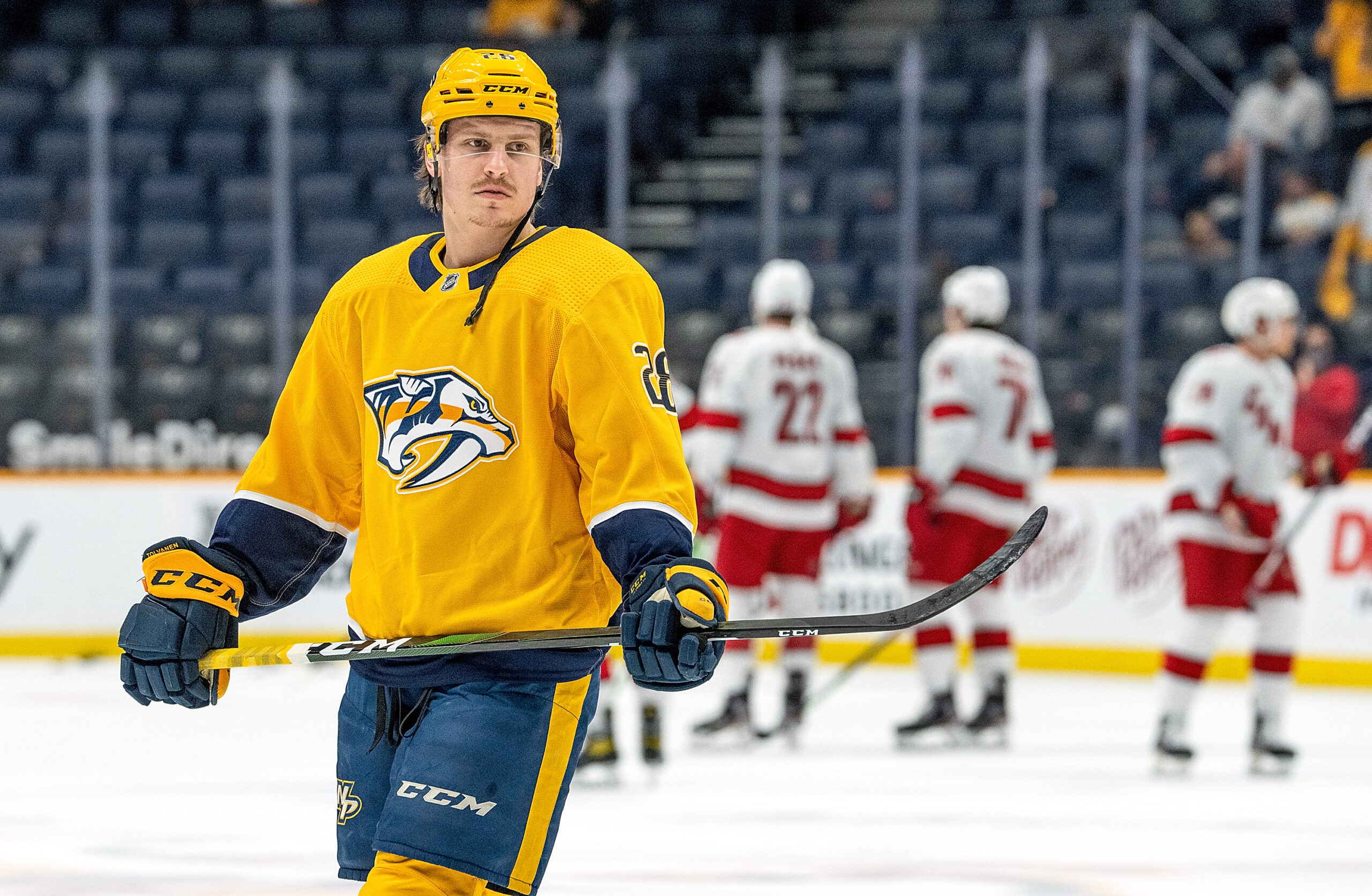 The Nashville Predators have undergone multiple changes this offseason. Fans were forced to say goodbye to some of their favorite players over the past few months, but one is coming back to “Smashville” in October. General manager David Poile announced the Predators have re-signed forward Eeli Tolvanen to a three-year deal.

The 22-year-old rookie was a restricted free agent going into this offseason. As Poile began working on the Predators’ competitive rebuild it became imperative to re-sign Tolvanen. He played in 40 games this past season and finished with 22 points. His 11 goals were fourth best on the team. The young forward quickly became an in integral part of the Predators’ offensive core and their future.

The Predators’ power play was an area of concern for most of last season. It failed to meet expectations and to shake things up Hynes moved the rookie onto the first special teams unit. Tolvanen added fire to the fizzled-out power play and led all Predators with six power-play goals.

“He’s got good instincts on it,” Predators coach John Hynes said of Tolvanen during an interview with the Nashville Post. “He really understands it and he’s been a very good power play player at every level he’s played in. So, we like the way that that unit has looked.” In January Nashville’s power play ranked 25th in the league. Once Tolvanen found his spot on the first unit, their power play improved to 17th in the league. (from ‘While not perfect, Predators power play trending in right direction’ Nashville Post, 02/24/21)

Tolvanen has the potential to be a top player in Nashville. The 5-foot-10 forward can score the big goals and four out of his 11 were game-winners, including one overtime winner against the Dallas Stars. On top of his scoring abilities, he is not afraid to bring a physical edge to the ice. The Finnish concluded the season with 78 hits, which was the third-best on the team.

At the young age of 22, Tolvanen has yet to reach the top of his game. Poile did an excellent job signing him to a low-risk contract with a cap hit of $1.45 million. Over the past couple of seasons, the Predators GM handed players some questionable contracts and has faced criticism due to overpaying players. Fans were relieved to see him bring a player back without committing eight years or dishing out more money than necessary.

What We Can Expect

Nashville fans hope they can expect more of the same from the 22-year-old forward. His development into a NHL player has been slow but appears to be paying off dividends. Tolvanen was drafted 30th overall by the Predators back in the 2017 draft. Once selected by the Predators he chose to begin his professional career in the KHL. His decision and path led him into a top role with the club in his rookie season. He finished 14th in Calder Trophy voting earning six votes.

“I think the coaching staff has been doing a really good job with me,” Tolvanen said during an interview in March. “I mean, being out of the lineup in the first couple games and now being a regular lately, getting power play time and getting first-line minutes, I think they showed me some clips (of what) I need to improve and just kind of gave me the freedom too to play with players like (Forsberg, Arvidsson and Johansen) and to play my game as well.” (from ‘Eeli Tolvanen leading a resurgent Predators offense’, Nashville Post, 03/30/21)

Tolvanen will be in his mid-20s at the conclusion of this contract. If he sees constant time on the power play and is able to develop chemistry with Filip Forsberg, he will become a staple in gold. Sometimes the long road is the right one and the young winger is a prime example. He was a difference-maker for the Predators last season and there is no doubt he will pick up right where he left off.

Kristy has been contributing to The Hockey Writers since March of 2021. She is thrilled to be putting her journalism degree to use and covers both the Nashville Predators and New Jersey Devils. Kristy is also a co-host of Chicks & Sticks, a weekly Youtube show produced by THW. You can follow her journey on Twitter @InStilettosBlog and Instagram SkatingInStilettos.