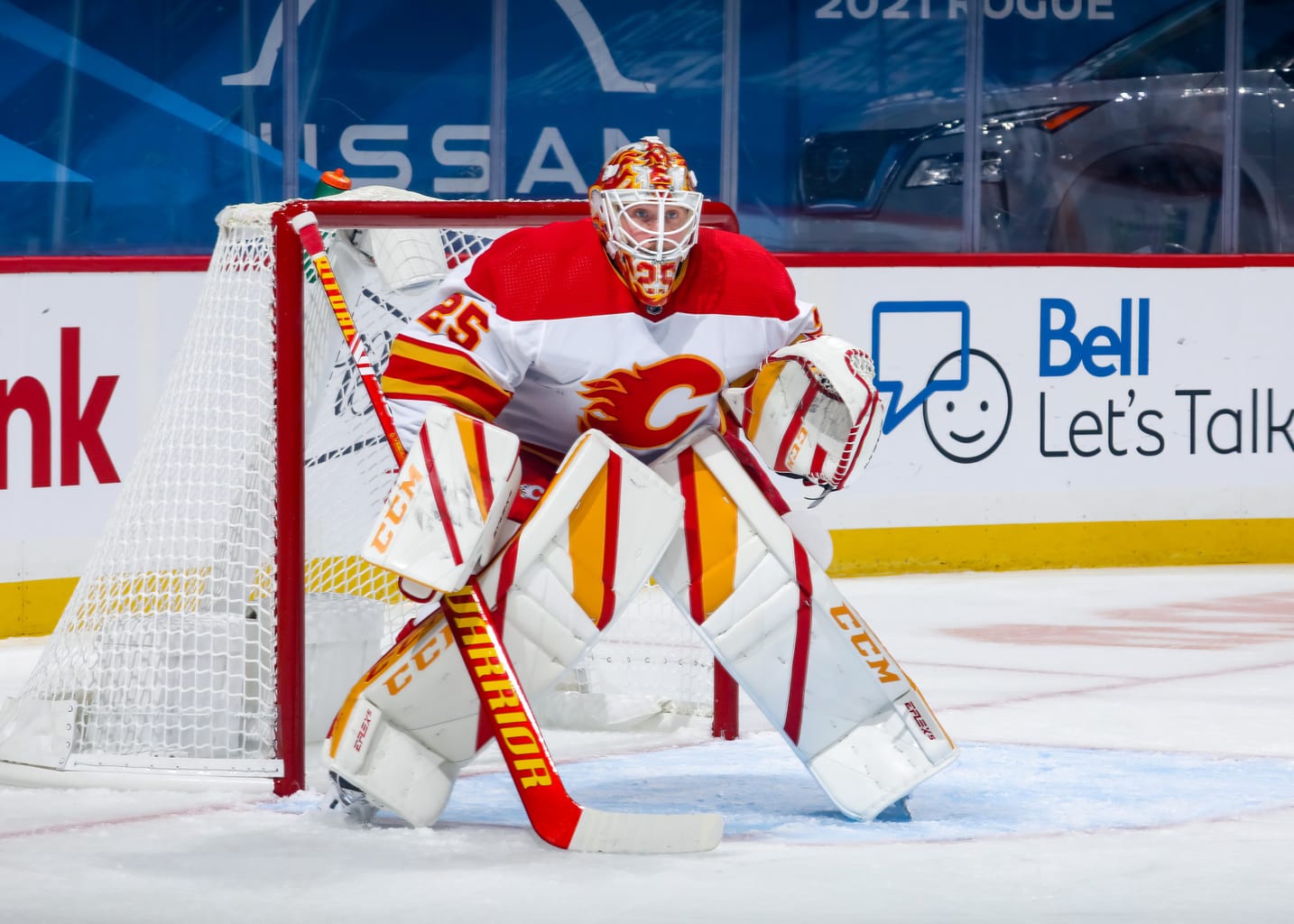 The Calgary Flames have used 15 goalies in the span of seven seasons since Miikka Kiprusoff retired. Since his retirement, the team has been unable to find a comparable replacement and hasn’t held on to a starting goalie for longer than three seasons. Brad Treliving consistently signed or traded for older starting goalies in Jonas Hiller, Brian Elliott, Mike Smith, and Cam Talbot, which at times worked but never got them over the hump. That trend continued when he brought in Jacob Markstrom, but this time he handed out a long-term contract that made it clear Markstrom was now Calgary’s guy for the foreseeable future. His Flames debut didn’t go quite as planned as injuries kept him out and were some cause of his struggles when he was playing, so he’ll be looking to bounce back and stay healthy in 2021-22.

This offseason and at the past few drafts, the team has added young goalies to the organization and some who could be poised to be the future starter. The team traded for Dan Vladar from the Boston Bruins and signed Adam Werner after he was not qualified by the Colorado Avalanche. Dustin Wolf also looks poised to graduate from the WHL and move on to play with the Stockton Heat this season. Whether it’s been finding a starter or getting capable help in the backup position, Calgary finally looks like they have some long-term solutions between the pipes.

Battle for the Backup Job

Heading into training camp, it looks as though the backup job is Vladar’s to lose. However, Werner will likely create a good battle for the position at training camp. Both Vladar and Werner have been playing in the AHL the past two seasons and have posted decent numbers for their respective teams. Each goalie has also made their NHL debuts, Vladar playing five games for the Bruins in 2020-21 and Werner playing two games for the Avalanche in 2019-20.

Vladar has played in 78 AHL games and posted a career 0.917 save percentage (SV%) which is slightly better than Werner’s 0.907 SV% in 46 career AHL games. He has also been integrated onto North American ice much longer as he made the move to the United States Hockey League (USHL) in 2015 and has played a total of 173 games across four different leagues. Werner should give him a run for his money at training camp, but as it stands, it looks as though Vladar will be backing up Markstrom and should be a good fit for the position. In his five games with the Bruins, he posted an 0.886 SV%, which was only that low because of five goals on 17 shots in his final outing. In three of his five starts, he posted a save percentage at or above 0.950 and only allowed six goals on 89 shots.

Prospects in the System

Many Flames fans have started to get excited about Wolf, who will be looking to start his first full season of pro hockey. In 2020-21, while the WHL was still working out a schedule, Wolf played in three games with the Heat, and after an unfortunate debut, he followed up with two solid starts. Making his way back to the WHL with the Everett Silvertips, he posted a 0.940 SV%, an 18-3-0 record, and four shutouts to prove that his time in junior is up. The ECHL could be a starting point for him this season with the number of goalies the Flames have at the pro level, but Stockton should be where he ends up.

In the past two drafts, the Flames have selected two fairly unknown goalie prospects in Daniil Chechelev and Arsenii Sergeev. Chechelev wasn’t on many draft boards when he was taken in the fourth round of the 2020 Draft. Flames’ fans quickly began to pay attention to him as he won 10 straight games to start his season in the Junior Hockey League (MHL). He finished the year in the Supreme Hockey League (VHL) with an 8-7-3 record and a 0.912 SV%. It was tweeted by his agent that he will be playing in North America this season, and yesterday he signed an AHL deal with the Heat. Sergeev has already made the transition to North America and played his 2020-21 season in the North American Hockey League (NAHL) with the Shreveport Mud Bugs. Following the season, he was selected in the seventh round of the 2021 draft. He is now slated to move up and play with the Tri-City Storm of the USHL in 2021-22.

Finally, there’s Tyler Parsons, who had a tough road during his professional career to this point. There were high hopes for him in Calgary after a successful junior career in London that was topped off with a Memorial Cup win. Since then, he has battled injury after injury, and it has been a challenge just to stay healthy and get into meaningful game action. He will most likely end up bouncing between the ECHL, and the AHL, getting starts with Kansas City and covering for injuries with Stockton. He’s only 24, and if he can stay healthy this season, there’s some hope for his career to get back on track.

A Bright Future for Flames’ Goaltending?

The last goalie that Calgary drafted and played more than 40 games with the club was Trevor Kidd, who was selected 11th overall in the 1990 Draft. Kidd played 178 games for Calgary and posted a 72-66-26 record and a 0.898 SV%. In the 30 years since then, Joni Ortio has played the second most amount of games for the Flames after being drafted by the team, which stands at 37. In the years between Kidd, Kiprusoff, and Markstrom, the prospect pool hasn’t looked very good, but following this offseason, Calgary’s goalie pool has never looked more promising.

There are a lot of ifs going into this season. For example, if Markstrom can return to form, if Vladar can continue his progression to becoming an NHL goalie, and if the younger prospects can make a splash in pro hockey this season and beyond. When training camps end in October, and the depth chart shakes out, the Flames organization will have a promising young group behind Markstrom from the NHL down to the USHL. The organization now looks like it has promise and stability throughout for the first time in a long time, possibly the first time in the club’s history.

Brett is a freelance writer covering the Calgary Flames here at The Hockey Writers. He is an enthusiast of hockey stats and continues to learn every day about the sports analytics movement. Brett enjoys using both statistical analysis and the old-fashioned eye test in his writing to create the best content for readers. His work at THW has been featured on the Calgary Flames’ news feed for The Score and on Yardbarker. Brett is also part of THW’s Flames Faceoff YouTube/podcast show where he brings his opinions each week on the team’s current state of affairs.