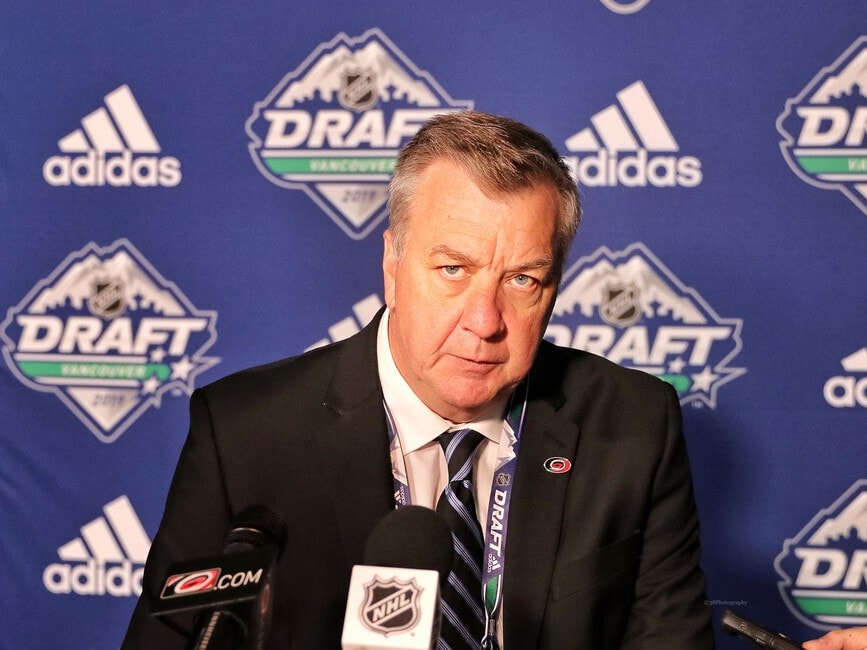 In today’s NHL rumors rundown, one reporter denies rumors that Jakob Chychrun might be on the move out of Arizona, while Carolina Hurricanes GM Don Waddell denies rumors he has a long-term deal in place for Jesperi Kotkaniemi. The Ottawa Senators have work to do on a couple of fronts, but what is their priority this week? Finally, would the Edmonton Oilers be open to trading for goaltender John Gibson?

Chychrun Not on Trade Block

Monday night, rumors circulated on Twitter that Coyotes defenceman Jakob Chychrun could be moved if the team got the right offer. Coyotes insider Craig Morgan shot those rumors down rather quickly saying the Coyotes know Chychrun is developing into one of the league’s better defencemen.

The rumor proposed that the Coyotes would accept two first-round picks for Chychrun, but one would have to imagine it would potentially take more than that considering he’s just 23 and scored a career-best 18 goals and 41 points in just 56 games on a low-scoring roster last season.

In any sense, the Coyotes are building around Chychrun, not trading him.

Rumors swirled last week that part of the offer sheet to Kotkaniemi from the Hurricanes included an understanding of what a long-term deal would look like with the player, thus ensuring that overpaying for the forward this season would average itself out over the long haul. According to Carolina Hurricanes beat writer Cory Lavalette, the Hurricanes say only talked to Kotkaniemi and his agent about a one-year deal and he has “no idea” what they would want on a long-term contract.

If this is true, it begs the question of why the Hurricanes would go this route if they knew that they didn’t have a deal in their back pocket and would risk having to pay Kotkaniemi’s qualifying offer each season. It seems more like Waddell might just be saying this to avoid any questions about conversations the team and the player may have had — even though those conversations would have been completely legal.

Bruce Garrioch of the Ottawa Sun notes that contract talks will take place this week between Senators GM Pierre Dorion and RFA forward Brady Tkachuk. The plan is to get him signed to a long-term contract. Dorion said that contract talks with Tkachuk’s agent have been “productive” and “positive.” There were talks on Friday and more will likely happen this week.

Dorion is focused on getting restricted free agent Brady Tkachuk signed to a long-term deal before camp, trying to acquire one more forward either through a trade or free agency and he may move centre Logan Brown, who has yet to sign the qualifying offer he received in late July.

As far as Brown is concerned, reports are he will not report to the Senators’ organization. Shawn Simpson writes: “Have been told that Brown won’t be heading to Ottawa. If he’s not traded, he will go play in Sweden.” Simpson weighed in on the Tkachuk talk too and said via Twitter: “If Tkachuk is being offered 8 x 8, I sign that in a minute if I’m BT. That’s great money and security. Nothing stops you from forcing a move down the road.”

Gibson a Target for Oilers?

During a recent mailbag segment on The Athletic, Daniel Nugent-Bowman was asked about the possibility of the Oilers trying to acquire goaltender John Gibson from the Anaheim Ducks. He calls it unlikely, citing Gibson’s annual salary-cap hit of $6.4 million through 2026-17 and notes the netminder’s “traditional and advanced numbers have been average at best for the past two seasons.

Gibson has a 10-team no-trade list and there’s been no indication he’s asked for a trade out of Anaheim. Nugent-Bowman says he understands the appeal to Edmonton fans:

I get it. The Oilers need a goalie of the present and future. Gibson is 28 and has six years left on a contract that pays him $6.4 million per year. That could be a good value when or if he’s on his game.

Reports on Tuesday morning are that former Canucks’ forward Jake Virtanen is headed to the KHL and has signed a one-year contract with Spartak Moskva. This should not come as a surprising move as Virtanen was not likely to get an opportunity with an NHL club this season considering the office allegations against him.